I'm no shrink but I'm pretty sure the President is almost completely crazy. This really should be no surprise to anyone since he was already slightly off the rails before he was elected. Now, after a year on the job as "the most powerful person on the Earth," and under attack from all sides with no apparent relief coming from any quarter, it's a wonder he hasn't hopped onto Air Force One and flown to southern France, then taken one of his limos to the Millau Viaduct, the world's tallest bridge at 1,125 feet, stopped in the middle and gotten out, then jumped off. Now that would get him into the history books for sure! 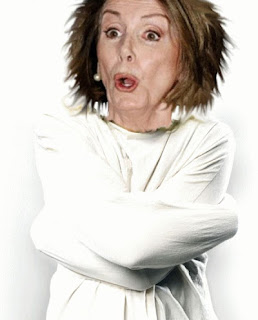 Instead he hangs around his 24-acre estate in Palm Beach, playing golf, tweeting and picking fights with people. The strangest part is that he is permitted to continue to do so, despite his clearly apparent and growing nuttiness exemplified by his increasingly dangerous repartee with other world leaders, some of them just as crazy as he is.

Isn't there a safety net written into the Constitution? You'd think there would be something somewhere about what to do if and when POTUS goes bonkers in office. After all, even Nancy Pelosi was locked up for awhile. (See photo)