We were barreling over the bridge, our wood-paneled minivan packed inside with people and on top with luggage, when I saw the suitcase fly out from our roof and land on The Causeway.

Does everybody have adventures instead of vacations in North Carolina, or is it just me?

There was the year my mom arranged a snorkeling lesson for me and my brother, only to find out after the fact that the lagoon in which we'd been swimming was notorious for it's tiger shark population.

Amazing Aquatic Minecraft PE Seed [1.…
Waves against the shore sound
11 Wealth Building Secrets You Need T…
Why am I packing this for my trip?
Faces in the Crowd: D.A. Pennebaker

There was the condo we rented with the questionable photo hung on the solarium wall. The female half of the couple who owned the condo had been Miss Virginia State College University or something. During that time, she had posed for a photo in her undies and little else. For some reason, this couple decided to hang a life-sized reproduction of that photo in the condo they rented to families. In the condo they shared with their kids.

And for some reason, we went back to that condo for years.

Then there was the year our luggage flew off the roof. Not all of it. Just a few bags. We failed to recover them. Let's just say you should never secure luggage and inflated pool rafts to your car roof. You should also never follow other people's cars because you think they stole your airborne luggage. And you should never buy a minivan with wood paneling.

But the biggest adventure by far is the time I saved my mom's life.

To hear her tell it, I was a hero. A fourteen year old warrior who overcame the treacherous sea to save my mother.

I will tell you that all I did was swim. With a raft.

We were lounging on a raft in the Atlantic, my mom and I, enjoying a mother-daughter talk. One of those chats about nothing and everything, where only the two of you exist. A lull in the conversation caused us to take stock of our surroundings.

We had swum out past what my mom calls The Rollies, the waves before they break. The shore, though distant, was visible and attainable.

To me anyway. To my mom, who can't swim, the shore, permanently absent of any lifeguards, was impossibly far. So while I had slipped off the raft and swum around to the other side to start our sojourn home, my mom had formulated a completely different plan.

Fortunately, I was a teenager. I knew everything. And I knew that no one had to die that day. All we had to do was hang onto the raft and kick in the direction of shore.

I grabbed her arm and hauled her back onto the raft. I told her to hang on and kick. When she protested, a gave her a firm "Do it," because, well, I'm bossy. And I'm really, really good at it.

Reluctantly, she held onto the raft and kicked. I kicked too, the shore growing closer and closer with each paddle of our legs. My mom, of course, couldn't see the shore. Her eyes were screwed shut, like a petulant child forced to eat something yucky. 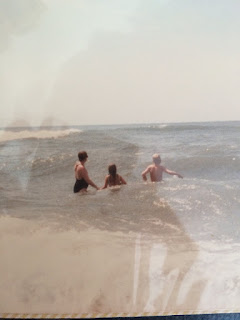 Soon enough, exhaustion claimed my mom. She couldn't kick. Not another beat. Again, she slid off the raft and pushed me toward shore. Again, I was given the farewell message for my father and siblings. Again, I pulled her back on the raft.

"Just hang on," I sighed, "I'll kick. We're almost there." But you know, said with teenage attitude.

My mom balked. I couldn't possibly kick the raft with both of us on it. What with rafts being so heavy and cumbersome and all.

"Just hold on," I said again, this time giving it a sigh and an eye roll.

Not that my mom saw it. Eyes still closed tight.

I was soon close enough to shore that I could stand, ocean lapping around my waist. I instructed my mom to open here eyes and stand.

Like a theater goer at a horror movie, she steadfastly refused to open her eyes. She clung to the raft, a child with a favored toy. She began kicking again, although I was holding the raft steady.

I assured her we were close to shore, if she would just open her eyes and stand, she would see that we were safe.

Eyes still firmly shut, my mom pushed off from the raft and stood.

Now, how was I supposed to know that I was standing on a sandbar and she, well, wasn't?

My mom's head disappeared under the water. I reached out, catching her elbow and pulling her back onto the raft. The progress  I'd made in assuring her of our safety took several steps backward. I had to pull her and the raft the last few feet to terra firma.

Reaching the beach, my mom pulled me into her arms. I had saved us. Her. All the years schlepping me to the Y had paid off. I was a hero. A star. A lifesaver.

I mean, that's pretty much every day for me. 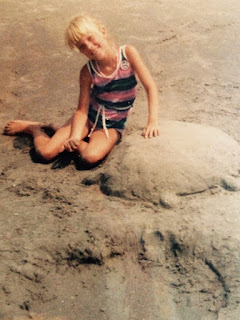 Nearly thirty years after that day in Atlantic Beach, we are still not permitted to bring flotation devices of any sort into the ocean, for fear, in my mom's words, that we will float away to China.

Who knows? Maybe that's where our luggage went.