Finally after six long months, I was graduating my court ordered drug and alcohol classes. Getting a DUI in California was a big deal. Even a first offense would change your entire life for three years. I don’t recommend it.

Anyway, I arrived that night to my final Class ready to sit through another boring two hour lecture, and to say goodbye to my fellow offenders.

I walked inside, signed my name on the attendance sheet and took my regular chair in the far back corner. I scanned the room, there was no sign of The Prince.

We had recently become friends outside of class. Though it was my final night, Princy Poo still had another year to go. The night before he had told me over text message he’d be there. So it was concerning that he hadn’t shown up.

Halfway through class, the door opened and The Prince was escorted in by the receptionist. “He’s been approved to stay,” she told the instructor.

The Prince’s face was flushed, his eyes reflected fear, and his forehead was covered in sweat. He took a seat across from me and shot me a shy smile.

After class had ended, I walked with him back to the parking lot.

“Wow, I thought you weren’t going to make it,” I said. “What happened?”

“I had to borrow it from a friend. They told me I could pay next week, but then I would have missed this week’s class.”

“Well, as long as you didn’t get dropped, it wouldn’t have mattered,” I said.

“There was no way I was going to miss your last class. I called three people to find the money. It was humiliating, but I wanted to see you.”

Now I know the reality of it was, that The Prince just didn’t want to go to jail, but in the beginning of our relationship, he had a way of making me believe he was doing big things just for me. I’d always been a sucker when it came to men and romantic gestures, and I wanted to believe him.

Not long after that, we had begun sleeping together. My kids were gone for a week and The Prince was staying the entire duration of it with me. Despite our hectic work schedules, it was still one of the best weeks of my life to date.

We would meet at my place after work and I’d make dinner. We’d go for walks, to the gym, to the pools and watch TV. The night would always end with incredible sex. I’ve always been a simple gal, it doesn’t take much to keep me happy.

On our third evening together we hit up one of the hot tubs in my apartment complex. Lucky for us it was empty. I pulled off my dress, revealing a bikini I had on underneath and slipped into the water. The Prince came in behind me with a giant erection consuming his trunks. His sex drive was the stuff romance novels were written about. Being a woman in my late 30’s, my sexual appetite definitely matched his.

I lit up a cigarette, and leaned on the side of the tub, pushing my large chest out of the water, exposing almost everything but my nipples. I gave him a flirtatious grin and giggled.

“You make my dick so hard.”

“Why?” I asked, moving towards him.

“Stop! There are cameras,” he pointed out.

I knew The Prince considered it.

We didn’t stay in there long. Within minutes we were back to my place, naked and wet, destroying my sheets.

When it was over, Princy Poo sat on the side of my bed and lit a cigarette. “Asterisk,” he said, “How many men have you slept with?”

There it was. The dreaded question every girl fears being asked. It was clear that The Prince had never read any of my writing. I decided to play this one off smoothly. I diverted it.

“How many people have you slept with?” I asked him.

Then he started counting the exs I had told him about. Your ex husband, Franklin’s dad… luckily for me the numbers matched.

Once he had been satisfied with my made up number, he told me a story. 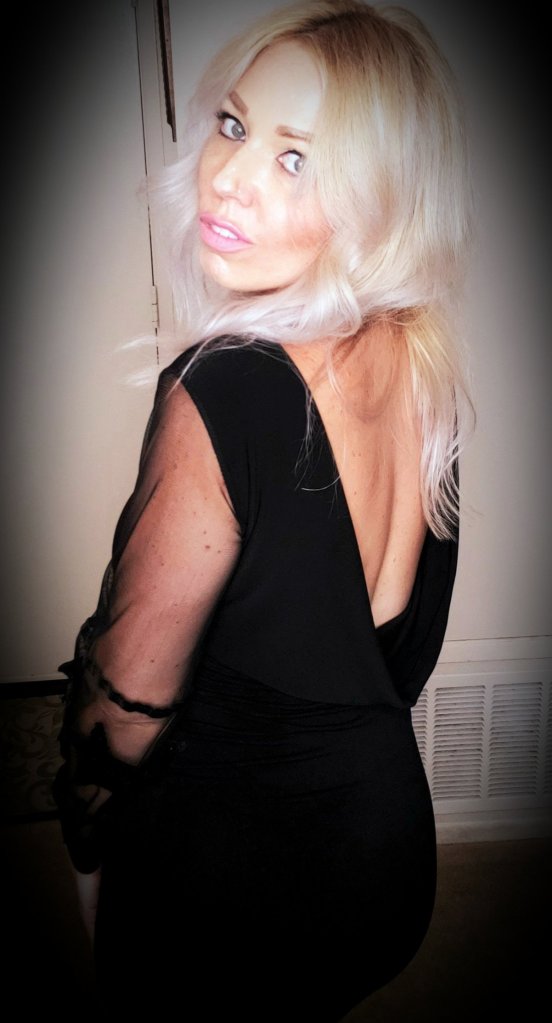 “I went out with my friend once, to buy a prostitute.”

Now listen up men, I’m sure you’ve all done the same thing, but please take note: Never, tell the woman you are dating about it. For the love of God, we don’t want to know. EVER!

“She was so beautiful, I paid for her and went back to her room. But I couldn’t do it, I couldn’t get hard. I was ashamed, I told her, ‘You are very beautiful but I’m sorry, I just can’t.'”

I still haven’t figured out why The Prince wanted to tell me something like that. Maybe to prove that he was a “good guy,” I don’t know. It was weird and I didn’t sleep much while processing it that night.

By Thursday of that week, things were still going well. Once again we came home from work and I made dinner. Afterwards we had an incredible romp.

“Babe, you are so good at this,” I told him. Your dick is so huge, like a stallion. Seriously, it’s the biggest thing I’ve ever encountered.”

The Prince’s body stiffened and his eyes darkened. “Asterisk, I said stop.”

I sat quietly a moment, his sudden change of tone was unexpected.

“Wait, I’m confused. Are you being serious right now?” I asked.

The Prince rolled over to his side, facing away from me. He never said another word that night.

I lied awake for hours that night, trying to figure out what I had done to cause his sudden shift in mood.

The next day, he had gone to work before I was up. I arrived home an hour before him. Soon after that, I received a text message.

“Did you start dinner yet?” it read.

“No. Not yet. I was thinking of making shrimp.”

I didn’t know why he didn’t want me to make it, I was hoping he was going to surprise me with a night out. But I had a gut feeling it was something else.

A little while later, The Prince walked through my front door. “Please, come outside and smoke a cigarette with me.”

I followed His Majesty out to my back patio, and lit up.

“Asterisk, I think I will just stay at my place tonight. I’m not feeling well, I’m depressed. I may call you later to come by if I feel up to it.”

“Okay. I’m sorry. Is there anything I can do to make you feel better?”

“No, when I’m depressed, I just want to be alone.”

After our cigarettes, I watched as The Prince packed his belongings, and left. His abrup change of mood put me into a depression of my own. I paced my apartment most of the night waiting for him to call. Everything had been going so well. I couldn’t understand what had occurred to change it.

I gave up on him and cried myself to sleep early that evening. The next day, I woke up to find I had missed his messages.

“Good morning,” I texted him. “Sorry, I missed you last night, I went to bed early.”

“I was going to tell you last night that you could come over,” he replied.

“I didn’t think you would message, so I just went to sleep. I can come by tonight,” I offered.

I checked in on The Prince through out the day. He didn’t seem to be emotionally recovering.

“I don’t want you to be around me when I’m not happy. You won’t have fun,” he texted.

“I just like being around you. You don’t have to entertain me.”

I made a big pot of rice and shrimp, packed an overnight bag and went over to visit my melancholy man. Once I had arrived, he opened the door to let me in. Though the sun was still out, his apartment was dark. His curtains were drawn and it felt like stepping into a cave. I put the food in the kitchen, and sat on the couch next to him. He didn’t say a word to me, and remained fixated on his phone.

After a few minutes, I pulled out my own and did the same thing. An hour went by and still he hasn’t said much.

“I’m going to get some dinner. Are you hungry, can I make you a plate?” I asked.

After I finished eating, I went into the bathroom and changed into some lingerie. The Prince didn’t seem to notice. I hopped onto the bed across from him and glanced his way while again scrolling through my phone. He glanced over to me and we made eye contact for the first time that evening.

His eyes were hollow like a black hole. After only a second, he looked back to his phone. I rolled over onto my tummy and closed my eyes.

I didn’t even hear him approach me. With the precision of a panther snatching his unsuspecting prey, The Prince snuck up behind me and inserted one of his fingers into my pussy. I let out a deep moan and he inserted another.

Now hold up a minute! I don’t want to you confuse you and let you think the Prince actually knew what he was doing, he didn’t! It was more painful than anything but I was just happy to have his attention so I went along with it. And, I must admit, the situation was pretty damn hot!

The Prince played with me like a new toy meant to be broken for a good ten minutes before taking off his pants and penetrating me.

When it was all over, he was in a much better mood.

“What did you bring for dinner?” he asked.

“You made me shrimp?” he asked, sounding like a small child.

I felt content to have done something that made him happy.

The contentment didn’t last long however, because the day after that, he ghosted me. But alas my friends, that’s another story.

If you liked what you just read, you will LOVE my books! Go check em out!