Welcome to Wrestling With Cinema, in which I use my background in film studies to offer what I hope is a fresh perspective on wrestling. Today, we’re looking back at last Sunday’s Academy Awards, which despite some of the usual diversity problems (something the Academy shares with pro wrestling), went a lot better in terms of good movies winning awards than they do in a lot of years.

Considering the whole slate of Best Picture nominees this year, I had the idea to recommend current wrestlers based on which of the nominated films you prefer. So if you like movies, and you’re looking for a wrestler to get into, this is the perfect guide for you. And if you already know all the wrestlers (which I assume is most of you), you can at least see if you agree with my choices, and let me know in the comments if you have other ideas.

If The Irishman is your thing, you’ll like Dustin Rhodes 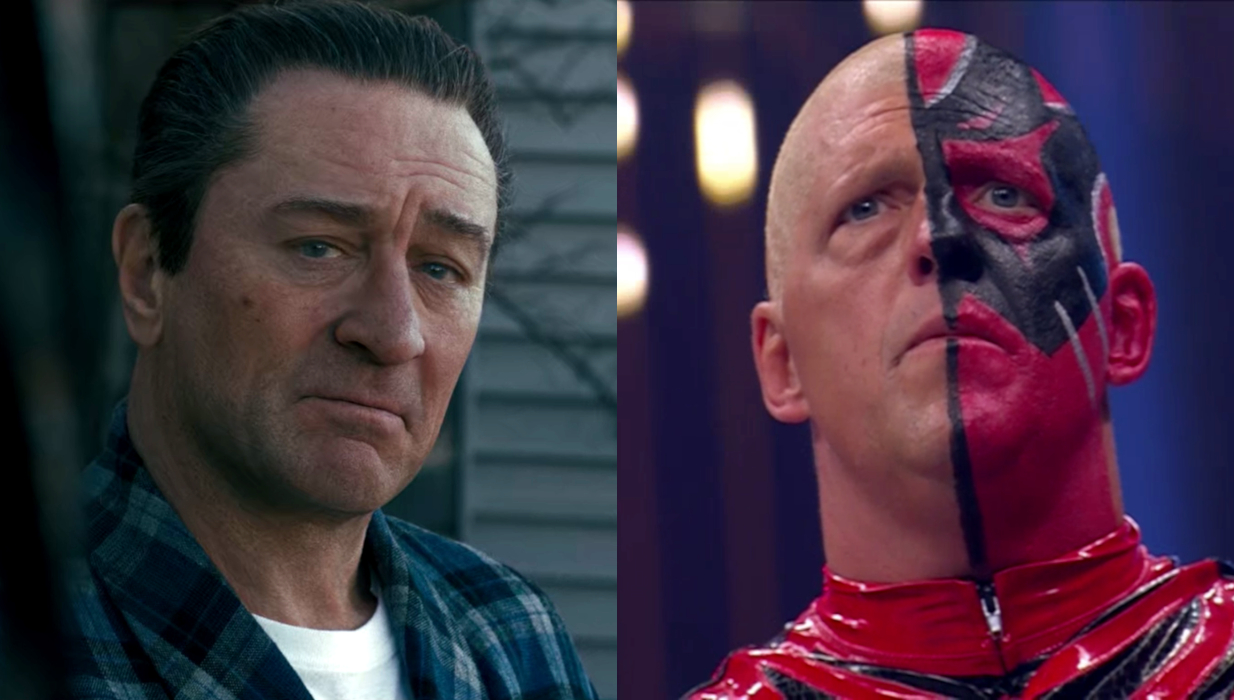 Frank Sheeran (Robert De Niro), the title character of Martin Scorsese’s The Irishman, has been around a very long time, and done a lot of things. As an older man, he’s looking back at the violent and dishonest business he spent his life in. There were times when he chose loyalty to his bosses over the love of his family, and he obviously has regrets about that. Dustin Rhodes would understand those regrets, but in the twilight of his long and storied career, he’s reconciled family and business, working with his younger brother Cody in All Elite Wrestling. If you’re looking for the epic tale of a weary veteran who’s been through it all, The Natural Dustin Rhodes is the wrestler for you. 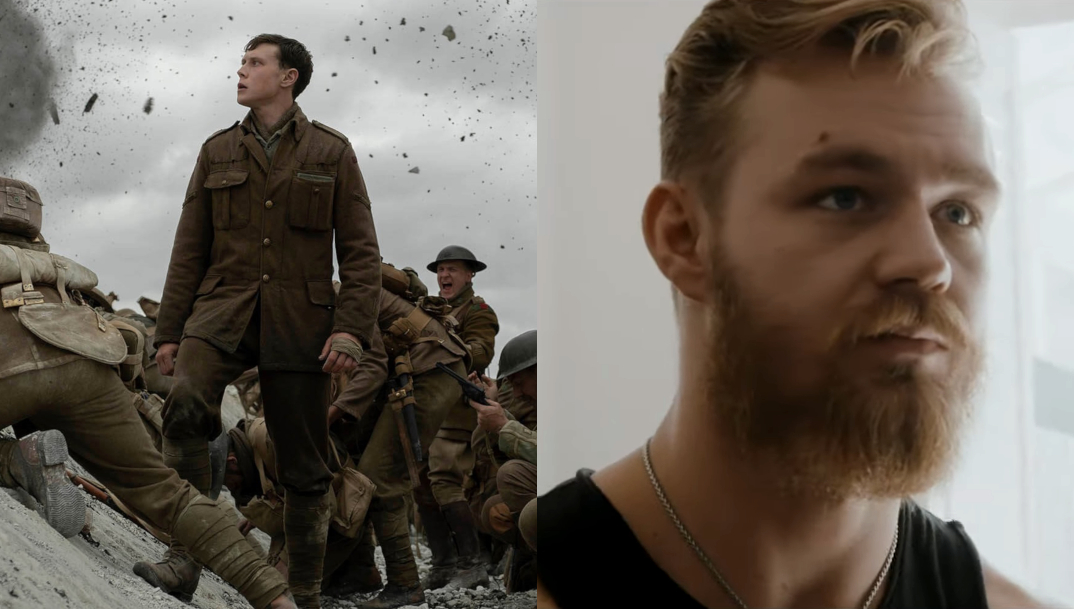 1917 stars George MacKey as Will Schofield, a young English soldier on a seemingly impossible race against time. Traveling overground through the battlefields of World War I, he refuses to give up even in the face of crashing planes, exploding shells, and a spill off a waterfall. I don’t know that young English wrestler Tyler Bate has ever faced those exact obstacles in a wrestling match, but overcoming impossible odds through bravery and heart is very much his thing. Just witness his match against WALTER at NXT UK TakeOver: Cardiff, in which he faces an opponent vastly bigger and stronger than he is, and refuses to let go even when defeat is inevitable. And hey, if you like 1917 more for its technical filmmaking prowess, Tyler Bate also happens to be one of the best technical wrestlers of his generation.

If you’re all about Jojo Rabbit, consider Alexander Wolfe 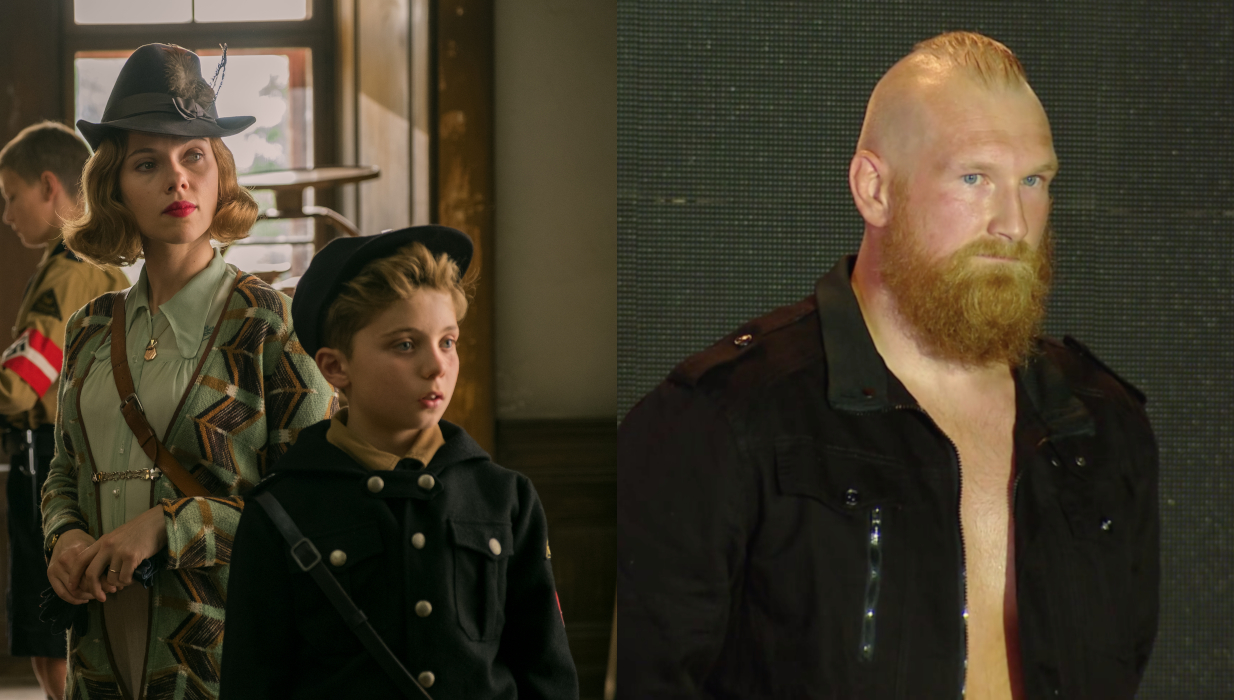 Jojo Betzler (Roman Griffin Davis) is a little boy in WWII Germany who is trying his hardest to be a good Nazi, because that’s what he thinks he’s supposed to be, but ultimately he fails because at heart he’s a good person. Now let’s be clear, despite their aesthetics and accents, Imperium aren’t Nazis. The Euro-centric faction that currently dominates NXT UK is fascistic about one thing: wrestling. And Alexander Wolfe, their first recruit after forming, isn’t a child. However, he is a former member of Sanity, a group known for their twisted and stunted mentality. Now maybe I’m wrong, but if I were picking any current member of Imperium to watch for an eventual babyface turn and feud with the rest of the group, it could only be Wolfe. He’s not a fascist, he’s just an overgrown kid who likes dressing up in a uniform and wants to be part of a club. 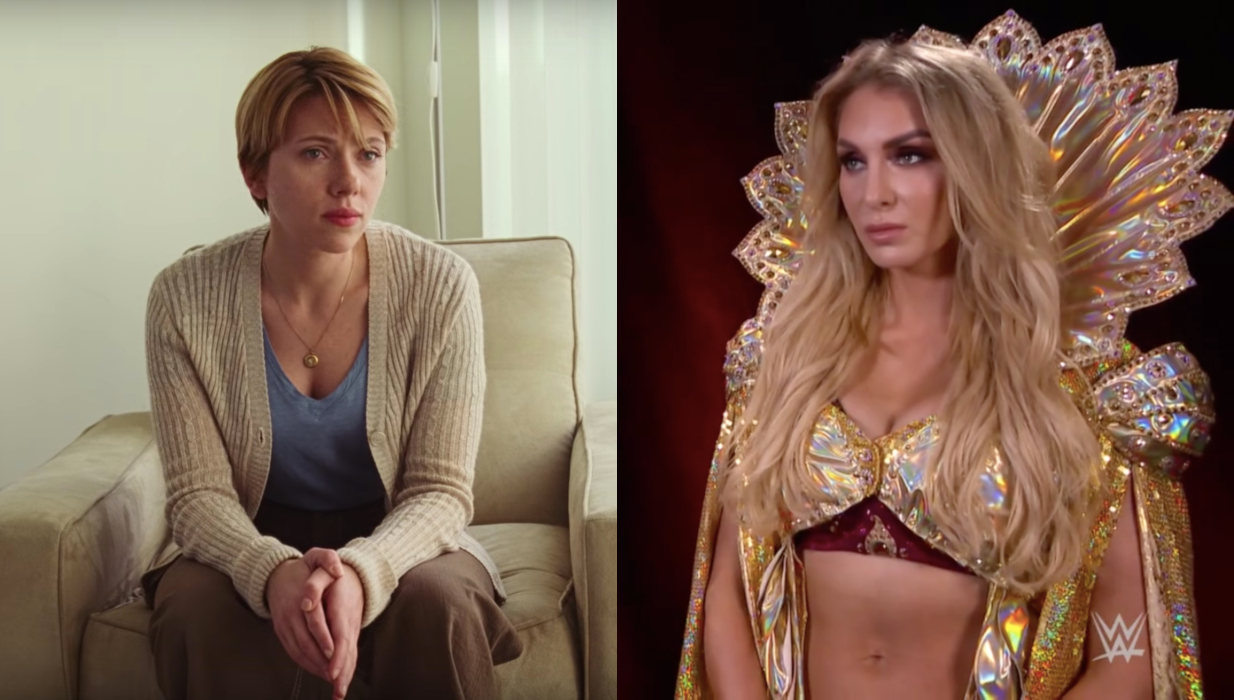 If you haven’t watched Marriage Story, you should know right off the bat that it’s a much more complex, subtle, and nuanced story than you’d guess from that one out-of-context scene that everybody made fun of on Twitter for a couple of weeks. It avoids easy clichés about divorce while artfully portraying the upheaval that a marriage’s end can cause in a person’s life, and what’s left when it’s over. I don’t usually like to dwell too much on the private lives of wrestlers, but I think we all know that Charlotte Flair is twice divorced and has gone through some rough times in her life. But now she’s engaged again, to Andrade, and seems really happy. One of the most beautiful moments in Marriage Story is Adam Driver singing Sondheim’s “Being Alive,” and Charlotte has also made the same choice described in that song, even knowing how much it can hurt, to open herself to love again. That’s always a moving story, in a movie or in real life, or in the halfway point know as pro wrestling.

If you’re into Joker, The Fiend is waiting for you 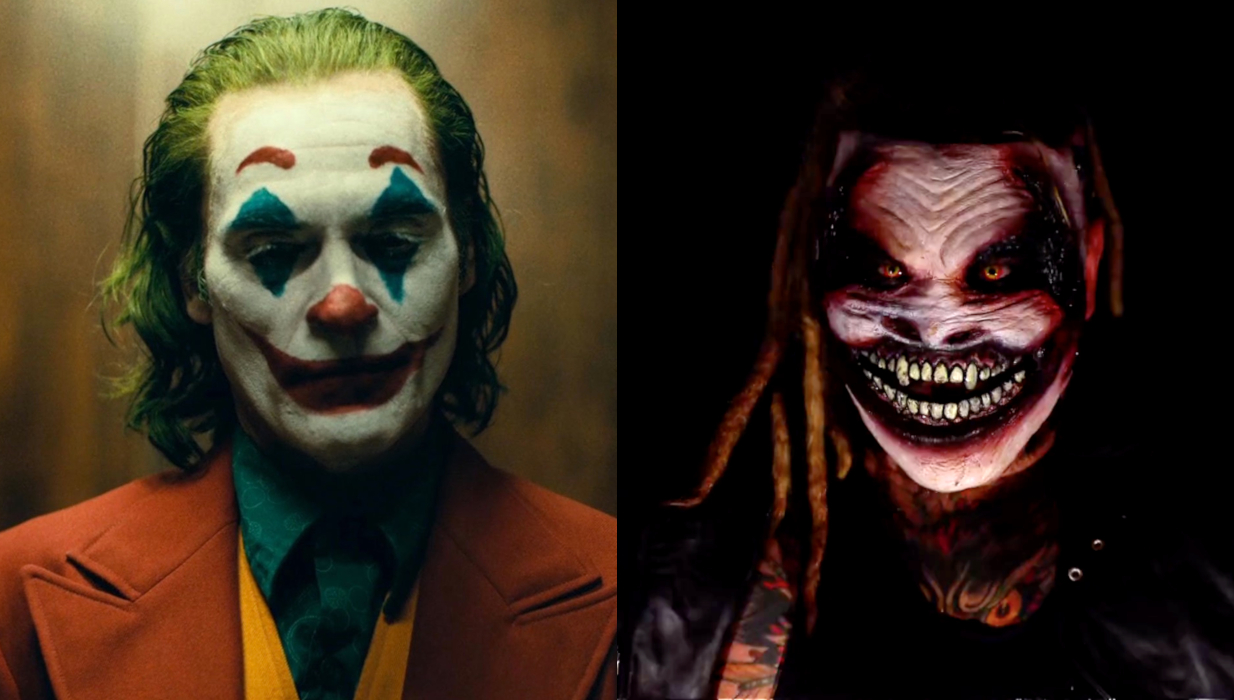 Arthur Fleck (Joaquin Phoenix) is a pitiful, broken man. He wants to be a famous comedian, but the world has beaten him down so many times that he’s lost hope. When he does become famous, and even inspirational to many people, it’s as an unhinged, murderous clown who threatens to upend the city around him in a world where Batman’s not yet even an idea in young Bruce Wayne’s mind. Bray Wyatt once seemed pretty broken too, as WWE Superstars go. He came up from NXT as a fantastic heel with amazing promo skills, but the WWE just never got behind him, and he lost every feud for years. But when he returned from a long hiatus in 2019, he found a new darker persona as the terrifying clownlike Fiend. The Fiend is so unstoppable that that might be the worst thing about him, but he’s brought a new level of evil to modern WWE.

If Ford v Ferrari is your favorite, you’ll be into Chris Jericho 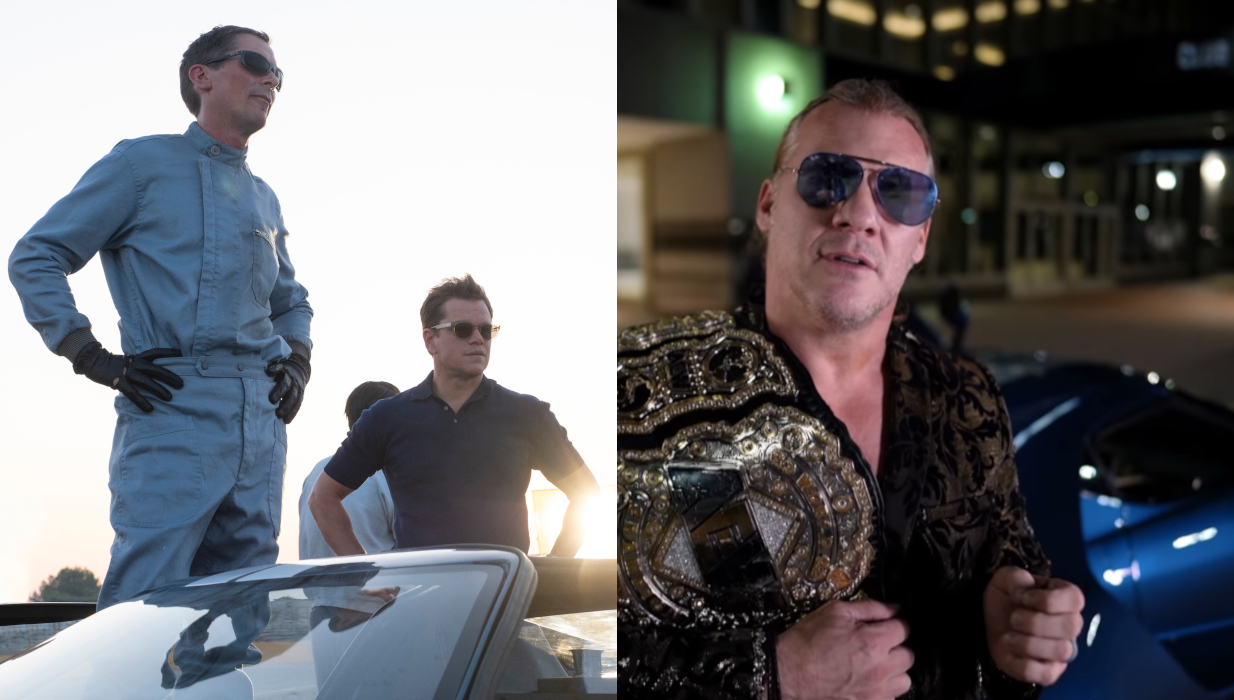 So your favorite Best Picture nominee is Ford v Ferrari? Not to put to fine a point on it, but you’re a dad, right? You like dad stuff? Movies about fast racecars and cool guys in aviator shades proving that they can beat the machine (or be as one with it)? If that’s your thing (and no judgment) you must already be a fan of wrestling’s #1 rock-n-roll dad, AEW World Champion Chris Jericho. In all seriousness, Ford v Ferrari is about the Ford company deciding to go all in on speed and face off against the company that had always been best at that. There’s a clear parallel between that story and WWE veteran Jericho getting in on the ground floor of AEW, a new company going up against the one he’d called home for so long. But honestly? The dad thing is key.

If Little Women means a lot to you, so will Alexa Bliss and Nikki Cross 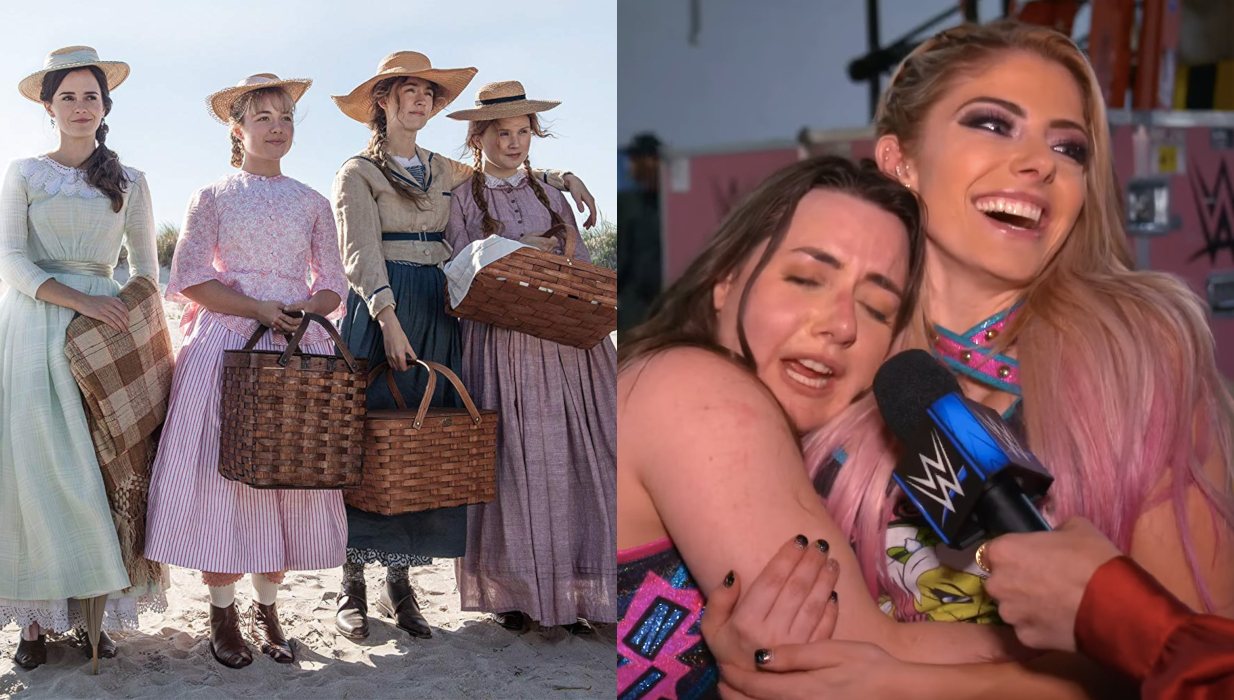 Little Women is a story about sisters, and the love they share despite how different their personalities and goals might be. Even when Amy (Florence Pugh) gets angry at Jo (Saoirse Ronan) and burns the manuscript of her book, they’re still able to come back from that and remain incredibly close at the end of the film, despite Amy marrying the man who once loved Jo. Alexa Bliss and Nikki Cross, the tag team sometimes called Bliss Cross Applesauce, haven’t known each other nearly as long as sisters would, but they’ve formed a bond that seems as close to unbreakable as friendships get in pro wrestling. Everyone thought Alexa was going to turn on Nikki, but instead their bond made Alexa become a better person, and now nothing comes between them. If platonic love and affection between women is your jam, Bliss and Cross are exactly your Applesauce.

If you like Once Upon a Time in Hollywood, check out Christopher Daniels 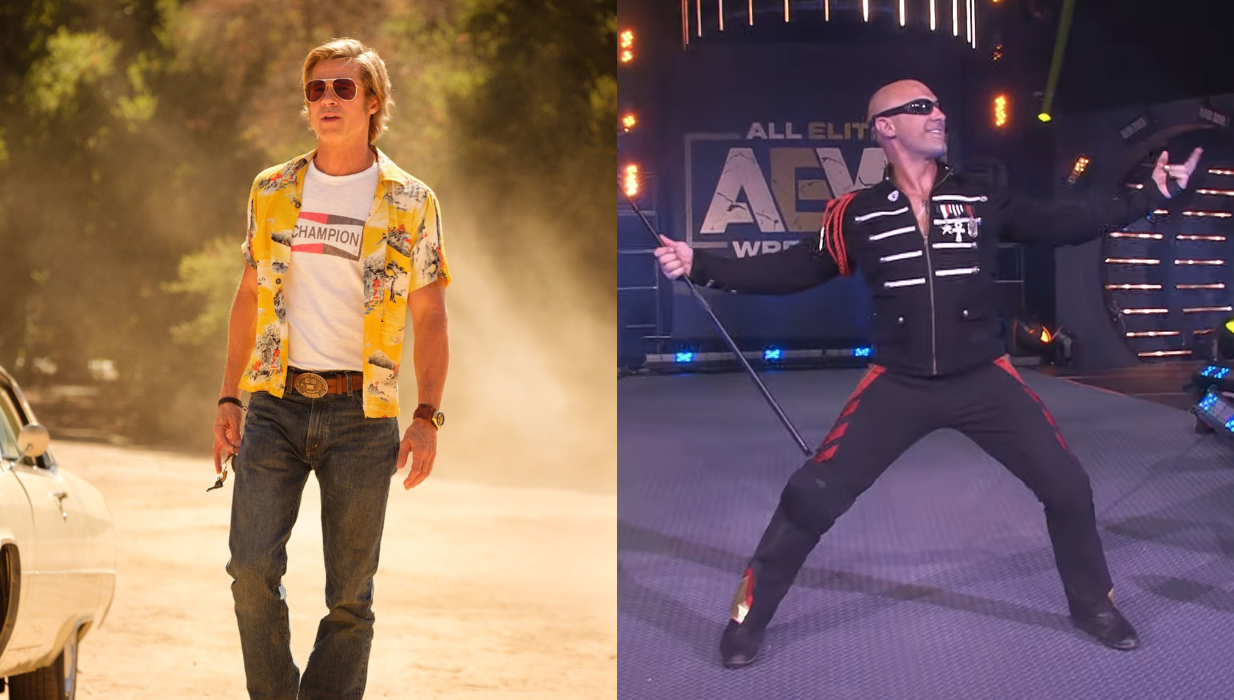 Once Upon a Time in Hollywood is a sprawling story about being a middle aged man in Los Angeles and wondering if the fast-changing world has passed you by. Actor Rick Dalton (Leonardo DiCaprio) has been reduced to guest-villain parts, the television equivalent of jobbing, while stunt man Cliff Booth (Brad Pitt) isn’t working at all except as Dalton’s driver and handyman. Christopher Daniels of SoCal Uncensored has been dealing with similar struggles in AEW, suffering a couple of injuries that have clearly left him wondering if he’s still got it. And just like when Cliff Booth unknowingly stumbles into Manson Family headquarters, Daniels has also attracted the attention of a dangerous cult in the Dark Order. Will at lead to an equally violent ending? There probably won’t be a flamethrower involved, but maybe.

If you love Parasite, you’ll get a kick out of the New Day 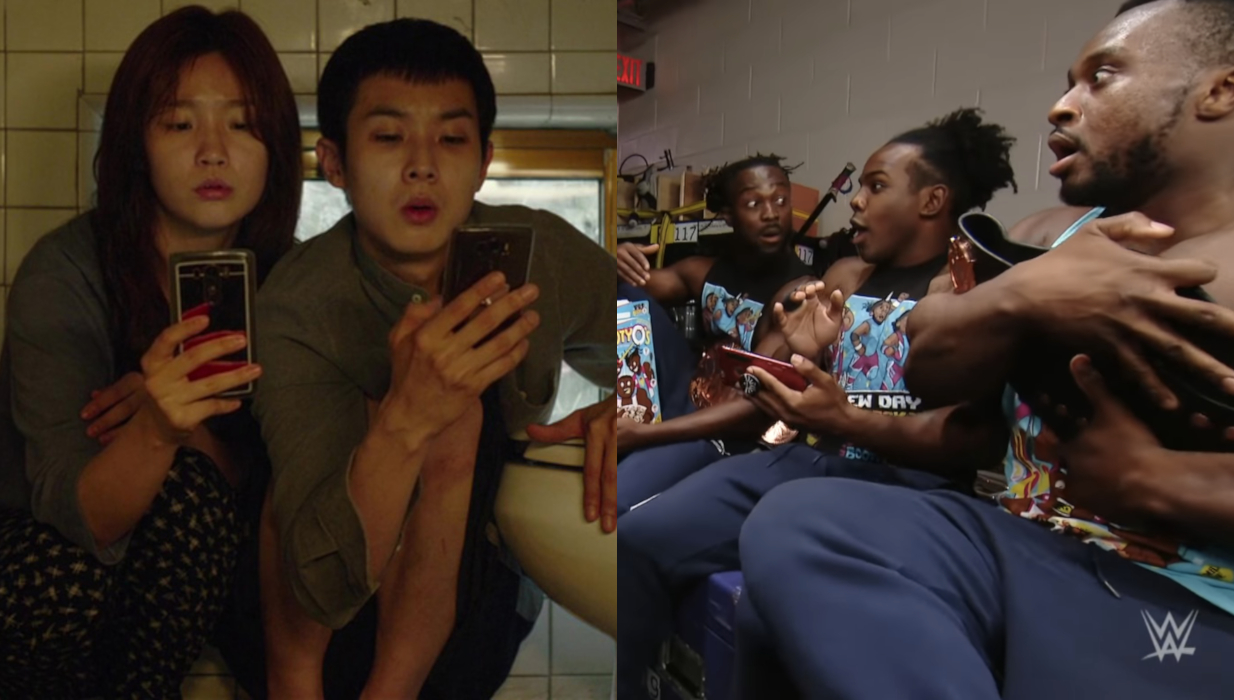 Parasite, the big winner at this year’s Oscars, is about a poor family who ingratiate themselves into a rich family’s home by taking on whatever household job they can, no matter how much lying it takes to make it happen. While they didn’t start out in a literal semi-basement, the New Day has a similar energy. It’s all-too easy to imagine a world where they never got anywhere in WWE despite their talent. Kofi Kingston had already been a mid-carder for the better part of a decade, Big E was just another huge guy on a roster full of huge guys, and Xavier Woods was a shorter guy just up from developmental, which rarely goes well for anyone. Then they teamed up and excelled by filling whatever role WWE was willing to give them. Vince wants a trio of stereotypical black preachers? They’re doing it. Time to become dastardly heels? They’re on it. Magical unicorn-men who sell cereal and throw pancakes? That’s them too. Through sheer charisma, athletic ability, and a willingness to try anything, they became three of the biggest stars in WWE, achieving not just seven Tag Team Championship runs, but also a run for Kofi as WWE Champion, plus huge merch sales and a popular podcast. We so often talk about wrestlers full of potential that WWE fails to make the most of, but the New Day took it upon themselves and pulled each other up to the top. As long as there’s nobody still hiding in the basement waiting for revenge, it doesn’t seem like anything’s going to knock them back down.

Thanks for reading! I know this was a pretty silly endeavor, but I hope it was a fun one too. Let me know if you’d like to see more movies-meet-wrestling content along these lines.