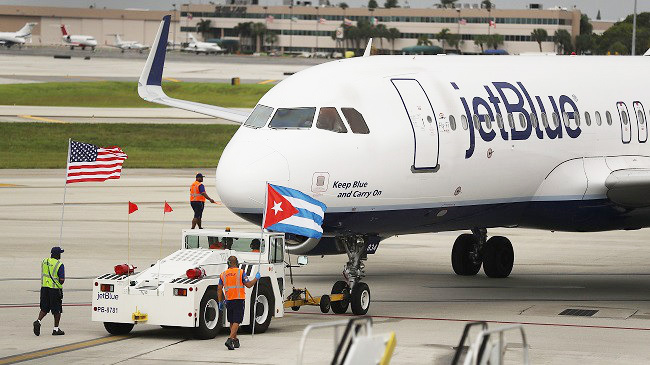 Today, Jet Blue unveiled its revamped airfare structure and it now includes a new tier that essentially acts as the airline’s first foray into the economy flight game. Blue Basic, as it’s being called, is now JetBlue’s cheapest airfare option, and aside from forbidding flight changes and not refunding cancellations, the new tier isn’t horrible. They haven’t shrunken the seats or taken away your right to snacks, Wi-Fi, and free TV — making this a great option if your goal is simply to catch a flight you’re absolutely sure you need to take for as cheaply as possible.

Previously, JetBlue’s offerings consisted solely of Blue, their cheapest option which included a carry-on but no checked bag, Blue Plus, which included a checked bag and carry-on, Blue Flex, which offered two checked bags, a carry-on and personal item and the ability to change flights without fees, and JetBlue’s business class offering, Mint. As of today, the structure remains virtually the same with the exception of Blue Flex which has been replaced with Blue Extra (and now doesn’t include free checked bags), plus the new tier Blue Basic.

Blue Basic has all the same accommodations as the Standard Blue Fare, but passengers board last and can only choose their seats from what is leftover 24 hours before departure, which means there is a high likelihood you’ll be sitting between two people. Members of JetBlue’s True Blue rewards program will also only receive one point per dollar spent on the Blue Basic fare, or two if booked online, as opposed to the normal three points per dollar for all the other fare groups.

In terms of how much you’ll be saving, it isn’t astronomical, but again if you’re traveling light, don’t care where you sit, and your flight plans are solid, you can shave off a few dollars. To test out how much I could stand to save, I picked an arbitrary date in the future to see how much I could save on a flight from Long Beach, California to New York City.

The standard Blue fare would cost me $175 for a roundtrip flight, $16 more expensive than it would cost if I choose JetBlue’s new Blue Basic tier for just $159. Is it life-changing? No, but would I choose the cheapest fare? Absolutely — that $16 can be used on a good cocktail once I land in New York City.