I’m not sure where Taika Waititi finds the time for all of his simultaneous projects. Between revealing how The Fonz inspired his imaginary Hitler character in Jojo Rabbit to revving up for Thor: Love and Thunder production, toiling away on a secret project, and promoting his role in The Mandalorian, he’s had a hectic few months. Finally, though, it’s time for the Jojo Rabbit trailer, which he not only directed but which also stars him as a young German boy’s imaginary friend — a dancing, troublemaking Hitler. And dance, he does.

Reports have suggested that Disney’s feeling a bit apprehensive about how Jojo Rabbit (from Fox Searchlight) will be received by mainstream audiences. However, this trailer certainly suggests that Waititi’s deft handling of the subject matter might serve up both a scathing takedown of Nazi allegiance (and its inherent fanaticism) and entertain and enlighten folks who’d otherwise shy away from the subject matter. Along with seeing “anti-hate satire” marketing, we’re also learning more about what the movie is actually about. A German boy, who often imagines Adolf Hitler by his side, finds his blind allegiance tested after his mother helps a young Jewish girl hide from Nazis. From the synopsis:

Writer director Taika Waititi, brings his signature style of humor and pathos to his latest film, Jojo Rabbit, a World War II satire that follows a lonely German boy (Roman Griffin Davis as JoJo) whose world view is turned upside down when he discovers his single mother (Scarlett Johansson) is hiding a young Jewish girl (Thomasin McKenzie) in their attic. Aided only by his idiotic imaginary friend, Adolf Hitler (Taika Waititi), Jojo must confront his blind nationalism.

Jojo Rabbit will open in select theaters on October 18th. We’ll leave you to figure whatever the hell is going on in this screenshot. 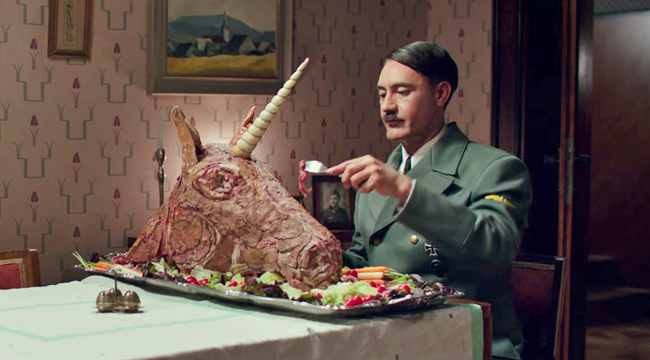