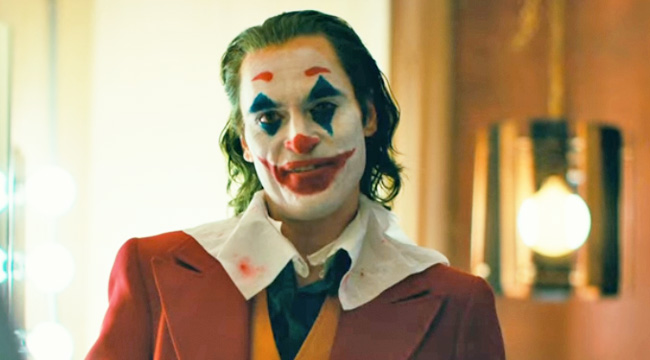 The Todd Phillips-directed Joker, starring Joaquin Phoenix and Robert De Niro, premiered at the 76th Annual Venice Film Festival over the weekend, and (spoiler alert) film nerds seem to frigging love it — if the subsequent buzz online has been any indication. The film takes a diversion from your typical comic book fare, as Phoenix tackles the supervillain as a character study of a man named Arthur Fleck.

A so-called “clown-for-hire by day,” Fleck (as the film’s synopsis reveals) aspires to be a stand-up comedian on a late night talk show hosted by Murray Franklin (De Niro), however he finds that “the joke always seems to be on him.” As a result, Fleck “turns to a life of crime and chaos,” set in 1981, in the gritty, fictional Gotham City.

As it currently stands, Joker is boasting an impressive 87 percent positive rating on Rotten Tomatoes, but people are pointing out the problematic nature of the film. For instance, while Phoenix’s performance is presumably indeed worthy of the early Oscar buzz, a film featuring the plight of a marginalized, failed white man acting out violently at a society that doesn’t understand him feels … I don’t know … a little tone deaf in 2019?

One way or another, people have Serious Opinions, despite the exhausting fact that it will be over a month before the film is released nationwide.

This website rules. We’ve been through all the cycles of Joker discourse a month before it comes out and now no one has to see the movie

I will not be watching the Joker movie but I did read through the responses of angry men to this tweet I sent out several months ago so I feel like I've seen it already. https://t.co/POhkbuw2WS

me observing the Joker movie discourse and not participating pic.twitter.com/AwLiP5UJMG

Others had jokes about a reports that the film received an insane, eight-minute-long standing ovation:

and just like that, i had identified the class of people i would never fuck https://t.co/m8pD65HDVy

I’m sorry but standing up and just straight up clapping for something for EIGHT MINUTES is a million times more demented than anything you’ll find in this movie https://t.co/SEf1st48Z5

the most i've ever clapped is for 15 seconds and then occassionally 15 seconds after that but not having my hands touching and just pantomiming so people didnt get mad at me https://t.co/oz0BcCpnwR

The outrage has also led to cooler heads making attempts to defend the new Joker, whether they be serious or tongue-in-cheek.

idg how people are saying JOKER is an incel movie when we already have HER pic.twitter.com/xHDpUwKgzb

Joker discourse has me defending comic book movies, Fight Club, white men, and the involuntarily celibate. I am sunk. I am ruined. Joker's trick.

Inspired by JOKER, here is a complete list of movies that have actually caused tangible societal harm:

And even days after the premiere, people still have plenty of jokes and memes:

If your Joker does not laugh at Nanette, you need to sit him down and have a discussion with him about toxic masculinity, Picasso, etc.

it was the one mystery Jessica Fletcher could never solve: why didn't she stop the Joker when she had the chance pic.twitter.com/yxwfCk6b68

It’s like Batman is a woman in modern politics. https://t.co/OIX2WSJkGo

'"..When you bring me out, can you introduce me as Joker? HA HA HA HA"

"Hi. I'm Joaquin Phoenix, and there's nothing funny about standing in line at the post office. That's why I use Stamps Dot Com–"

The Joker but it’s about Clippy becoming an incel

But if there’s one thing we can all agree on — regardless of what happens a month from now, Phoenix’s take on the Joker still won’t even be close to the most disliked Joker of all time.

still think leto's aborted run as joker is one of the funniest pop culture episodes in recent times. just in terms of how much effort he put into it and how much everybody hated it