Go Back to Russia, Without Love

Tags: russia story russian woman disability anger awesome
April 9th 2010
View original
A Russian orphan was adopted by a woman from the USA and now she's sent him back.
That's the top and bottom of it, and of course there's more meat to the bones, but this is the Story to which Russia, reportedly, has "reacted with horror".
Nonsense.
In my experience, Russians are pretty fucking hardy.  Were I to hear a story like 'Canadian woman sends back English boy' I wouldn't react with horror, and I don't know anyone who would.  It would be mild surprise, well for me it would be utter indifference, and maybe a mention of 'tsk, those fucking Canadians, can't make up their minds' .  Russians would certainly not be horrified at all by this absolutely not-horrific story.

Sex on Your Period – Reasons to Do It
Top 10 Sites to watch Telugu Movies O…
Spider-Man: If This Be My Destiny - L…
Crunchyroll – How to Watch Anime Onli…
Office Life These Russians were too busy cooking a dog to give a shit
Oh yes, and there's "Fury" says Will Stewart.  Will, just shut the fuck up would you?  Do you even know what fury is?  That's like major Anger, like punching a hole in a door anger.  Not a little bit of dismay, followed possibly by minor disgust which reaction this news actually has provoked.
Nurse Torry-Ann Hanson, who has a made-up first name, stuck little Artem, which also sounds suspiciously made-up but I can't tell, on a plane to Russia, with a note saying in broad terms that he's a violent psychopath so have him back.
Russian officials have reacted with uncontrollable violent rage and said that his only Disability is that he is flat-footed.  That's a disability now?  No wonder all the handicapped parking spots are always taken at the supermarket.  If I had a disability like not-working legs, I would be seething with a homicidal hatred towards Artem at this fact. Were my story being reported by Will Stewart that is.
This is quite bad behaviour from Totty-Ann or whatever her name is, and she's missed out on one absolutely vital benefit of having a son from Russia with the surname Saveliev.  With the new ruleset in, he would be awesome at Scrabble.
What's sinister about the reporting of this story, is that everywhere I've seen it there's been mention of other Russian children being killed after being adopted to America.  I know that reporters are stupid and everything, but are they seriously trying to imply some sort of conspiracy here?
I went out with a Russian woman once who didn't know who David Hasslehoff was.  Obviously after I found this out the relationship didn't go anywhere. 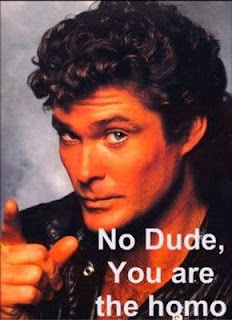 I know.  You're like, no way man, everyone knows The Hoff.
I came back from the bar and said 'Hey, there's a giant poster of The Hoff behind the bar'
"Who?
The Hoff, David Hasslehoff!
Not really sure who is this The Hoff.
What the fuck man?  Knightrider, Baywatch, he's awesome and he's got big hair.
No, I'm sorry, would you like some borscht?"
She wasn't to know that offering beetroot soup to me, is like sending back an orphan to a Russian official.
Offski.

Go Back to Russia, Without Love