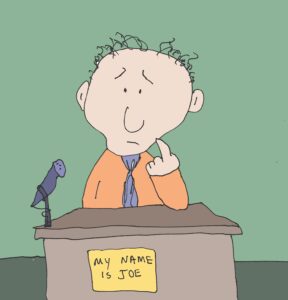 As Election Day approaches, many are concerned that the Democratic Nominee is exhibiting early stages of Dementia.  At a recent campaign stop in Michigan, he fumbled through COVID statistics, at one point going totally incoherent, saying there were “6 thousand, 344 thousand, 700 positive cases in the US military, I mean the United States overall.”  It made people in his own Party extremely nervous about letting him out in public for the next 2 months.  House Speaker Pelosi went as far as to suggest cancelling the Presidential Debates, so that Joe doesn’t look like a complete moron on national TV.

DNC leaders, however, are not overly concerned.  They think that having a brain-impaired President who can be propped up in his chair as a non-functional figurehead may work to their advantage in executing their social revolution agenda.

“Let’s face it…leaders who are egomaniacs can be so difficult to work with,” one insider commented.  “They think they know it all, and are not good listeners.  Better to have a guy who mumbles to himself in the corner, so that the rest of us can get the country moving in the right direction.  Or (ha, ha) in the left direction, in our case.”

Still, Joe must make it through the Election.  Most Democrats don’t care if the citizens elect a candidate suffering from dementia or any other impairment, as long as it’s not Trump.  Hell, some were even so desperate that they wanted to nominate an avowed socialist, Crazy Bernie Sanders, and his platform to turn the USA into an oversized Cuba, albeit with better cars.  Even though Joe is no Bernie, his malady will allow the Marxist element to effectively run things in the White House, and get the country away from this darn free enterprise path, and onto a new, inspired road to social justice, income equality, and global re-cooling.

Opponents have suggested Biden receive a full medical exam prior to the Election, so that voters can know whether they are electing someone who could figure out what button to push in the event of a nuclear attack… hopefully not the one that orders cheesecake and a fresh latte from the White House butler.  Dems feel that an exam is unnecessary, since, according to them, a possibly-impaired Biden would still be better than a known-impaired Trump.  The fight goes on.

Disclaimer:  all stories in Bizarreville are fiction… that’s our story, and we’re sticking to it.