Mecca, officially Makkah al-Mukarramah (Arabic: مكة المكرمة‎, romanized: Makkat al-Mukarramah, lit. 'Makkah the Noble') and commonly shortened to Makkah,[a] is the holiest city in Islam and the capital of the Makkah Province of Saudi Arabia.[2] The city is 70 km (43 mi) inland from Jeddah on the Red Sea, in a narrow valley 277 m (909 ft) above sea level. Its last recorded population was 1,578,722 in 2015.[3] The estimated metro population in 2020 is 2.042 million, making it the third-most populated city in the kingdom. Pilgrims more than triple this number every year during the Ḥajj pilgrimage, observed in the twelfth Hijri month of Dhūl-Ḥijjah.

Mecca is the birthplace of Muhammad. The Hira cave atop the Jabal al-Nur ("Mountain of Light") is just outside the city and is where Muslims believe the Qur'an was first revealed to Muhammad.[4] Visiting Mecca for the Hajj is an obligation upon all able Muslims. The Great Mosque of Makkah, known as the Masjid al-Haram, is home to the Ka'bah, believed by Muslims to have been built by Abraham and Ishmael, is one of Islam's holiest sites and the direction of prayer for all Muslims (qibla), cementing Mecca's significance in Islam.[5]

Muslim rulers from in and around the region long tried to take the city and keep it in their control, and thus, much like most of the Hejaz region, the city has seen several regime changes, which contributes to its rich history. The city was finally conquered in the Saudi conquest of Hejaz by Ibn Saud and his allies in 1925. Since then, Mecca has seen a tremendous expansion in size and infrastructure, with newer, modern buildings such as the Abraj Al Bait, the world's fourth-tallest building and third-largest by floor area, towering over the Great Mosque. The Saudi government has also carried out the destruction of several historical structures and archaeological sites,[6] such as the Ajyad Fortress.[7][8][9] Non-Muslims (Kuffar) are strictly prohibited from entering the city.[10][11]

Muslims from around the world visit the city, not only for the Hajj and Umrah pilgrimages, but also as tourists to visit regional landmarks such as the 'Aisha Mosque (Masjid 'Aisha) and the sites visited by pilgrims in the Hajj and 'Umrah. Mecca is now home to two of the most expensive buildings in the world, the Masjid al-Haram, valued at 100 billion US dollars, and the Abraj al-Bait complex, valued at 15 billion US dollars.

Under the Saudi government, Mecca is governed by the Mecca Regional Municipality, a municipal council of 14 locally elected members headed by the mayor (called Amin in Arabic) appointed by the Saudi government. As of May 2015, the mayor of the city is Dr. Osama bin Fadhel Al-Barr.[12][13] The City of Mecca amanah, which constitutes Mecca and the surrounding region, is the capital of the Mecca Province, which includes the neighboring cities of Jeddah and Ta'if, even though Jeddah is considerably larger in population compared to Mecca. The Provincial Governor of the province from 16 May 2007 is Prince Khalid bin Faisal Al Saud.[14]

Muhammad and the conquest of Mecca.

Muhammad was born in Mecca in 570, and thus Islam has been inextricably linked with it ever since. He was born in a minor faction, the Banu Hashim, of the ruling Quraysh tribe. It was in Mecca, in the nearby mountain cave of Hira on Jabal al-Nour, that, according to Islamic tradition, Muhammad began receiving divine revelations from God through the archangel Jibreel in 610 AD. Advocating his form of Abrahamic monotheism against Meccan paganism, and after enduring persecution from the pagan tribes for 13 years, Muhammad emigrated to Medina (hijrah) in 622 with his companions, the Muhajirun, to Yathrib (later renamed Madinah). The conflict between the Quraysh and the Muslims is accepted to have begun at this point. Overall, Meccan efforts to annihilate Islam failed and proved to be costly and unsuccessful.[citation needed] During the Battle of the Trench in 627, the combined armies of Arabia were unable to defeat Muhammad's forces.[72] In 628, Muhammad and his followers wanted to enter Mecca for pilgrimage, but were blocked by the Quraysh. Subsequently, Muslims and Meccans entered into the Treaty of Hudaybiyyah, whereby the Quraysh and their allies promised to cease fighting Muslims and their allies and promised that Muslims would be allowed into the city to perform the pilgrimage the following year. It was meant to be a ceasefire for 10 years; however, just two years later, the Banu Bakr, allies of the Quraish, violated the truce by slaughtering a group of the Banu Khuza'ah, allies of the Muslims. Muhammad and his companions, now 10,000 strong, marched into Mecca and conquered the city. The pagan imagery was destroyed by Muhammad's followers and the location Islamized and rededicated to the worship of Allah alone. Mecca was declared the holiest site in Islam ordaining it as the center of Muslim pilgrimage (Hajj), one of the faith's Five Pillars. 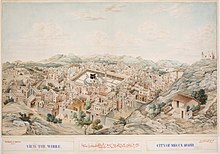 Panorama of Mecca, 1845, from the Khalili Collections

Muhammad then returned to Medina, after assigning 'Akib ibn Usaid as governor of the city. His other activities in Arabia led to the unification of the peninsula under the banner of Islam.[60][72] Muhammad died in 632. Within the next few hundred years, stretched from North Africa into Asia and parts of Europe. As the Islamic realm grew, Mecca continued to attract pilgrims from all across the Muslim world and beyond, as Muslims came to perform the annual Hajj pilgrimage. Mecca also attracted a year-round population of scholars, pious Muslims who wished to live close to the Kaaba, and local inhabitants who served the pilgrims. Due to the difficulty and expense of the Hajj, pilgrims arrived by boat at Jeddah, and came overland, or joined the annual caravans from Syria or Iraq.[citation needed]

Mecca was never the capital of any of the Islamic states. Muslim rulers did contribute to its upkeep, such as during the reigns of 'Umar (r. 634–644 CE) and 'Uthman ibn Affan (r. 644–656 CE) when concerns of flooding caused the caliphs to bring in Christian engineers to build barrages in the low-lying quarters and construct dykes and embankments to protect the area round the Kaaba.[60]

Muhammad's return to Medina shifted the focus away from Mecca and later even further away when 'Ali, the fourth caliph, took power chose Kufa as his capital. The Umayyad Caliphate moved the capital to Damascus in Syria and the Abbasid Caliphate to Baghdad, in modern-day Iraq, which remained the center of the Islamic Empire for nearly 500 years. Mecca re-entered Islamic political history during the Second Fitna, when it was held by Abdullah ibn az-Zubayr and the Zubayrids.[citation needed] The city was twice besieged by the Umayyads, in 683 and 692 and for some time thereafter, the city figured little in politics, remaining a city of devotion and scholarship governed by various other factions. In 930, Mecca was attacked and sacked by Qarmatians, a millenarian Shi'a Isma'ili Muslim sect led by Abū-Tāhir Al-Jannābī and centered in eastern Arabia.[73] The Black Death pandemic hit Mecca in 1349.[74]