Al-Hasan ibn Ali ibn Abi Talib (Arabic: ٱلْحَسَن ٱبْن عَلِيّ ٱبْن أَبِي طَالِب‎, romanized: Al-Ḥasan ibn Alīy ibn Abī Ṭālib; 1 December 624 – 1 April 670 CE), also spelled Hasan or Hassan, was the older son of Ali and Muhammad's daughter Fatimah, and was the older brother of Husain, as well as the fifth[a] of Rashidun, or "Rightly Guided Caliphs".[8][9] Muslims respect him as a grandson of the Islamic prophet Muhammad. Among Shia Muslims, Hasan is revered as the second Imam. Hasan was elected for the caliphate after his father's death, but abdicated after six or seven months to Muawiyah I, the founder of the Umayyad dynasty[10][11] to end the First Fitna.[12] After Hasan's abdication, the caliphate turned into kingship.[13][14] Al-Hasan was known for donating to the poor, his kindness to the poor and bondsmen, and for his knowledge, tolerance and bravery.[15] For the rest of his life, Hasan lived in Medina, until he died at the age of 45 and was buried in the Jannat al-Baqi cemetery in Medina. His wife, Ja'da bint al-Ash'at, is commonly accused of having poisoned him. 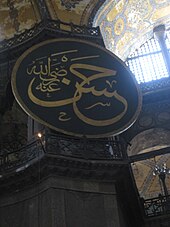 When Al-Hasan was born in the year 624 CE, Muhammad slaughtered a ram for the poor on the occasion of his birth, and chose the name "Al-Hasan" for him. Fatimah shaved his head and gave the weight of his hair in silver as alms.[10][20] According to Shi'ite belief, theirs was the only house that archangel Gabriel allowed to have a door to the courtyard of al-Masjid an-Nabawi.[10] Both Shia and Sunni Muslims consider Al-Hasan to belong to the Ahl al-Bayt of Muhammad as one of the Ahl al-Kisa ("People of the Cloak") and participants of the Event of Mubahalah.[19]

There are many narrations showing the respect of Muhammad toward his grandsons, including the statements that his two grandsons would be "sayyedā šabāb (masters of youth) of Paradise", and that they were Imams "whether they stand up or sit down".[b][21][20][19][21] He also reportedly predicted that Hasan would make peace between two factions of Muslims.[10]

In the year AH 10 (631/32 CE) a Christian envoy from Najran (now in northern Yemen) came to Muhammad to argue which of the two parties erred in its doctrine concerning Isa (Jesus). After likening Jesus' miraculous birth to Adam's creation,[c]—who was born to neither a mother nor a father—and when the Christians did not accept the Islamic doctrine about Jesus, Muhammad was instructed to call them to Mubahalah where each party should ask God to destroy the false party and their families.[19][22][23] "If anyone dispute with you in this matter (concerning Jesus) after the knowledge which has come to you, say: Come let us call our sons and your sons, our women and your women, ourselves and yourselves, then let us swear an oath and place the curse of God on those who lie."[d][19][24][23] Except for al-Tabari, who did not name the participants, Sunni historians mention Muhammad, Fatimah, Al-Hasan and Al-Husayn as having participated in the Mubahalah, and some agree with the Shi'ite tradition that ‘Ali was among them. Accordingly, in the Shi'ite perspective, in the verse of Mubahalah, the phrase "our sons" would refer to Al-Hasan and Al-Husayn, "our women" refers to Fatimah, and "ourselves" refers to ‘Ali.[19][24][23]

It is said that one day, the ‘Abbasid Caliph Harun al-Rashid questioned the seventh Twelver Shi‘ite Imam, Musa al-Kadhim, asking why he had permitted people to call him "Son of the Apostle of Allah", while he and his forefathers were Muhammad's daughter's children, and that "the progeny belongs to the male (‘Ali) and not to the female (Fatimah)".[25] In response al-Kadhim recited the verses Quran, 6:84 and Quran, 6:85 and then asked "Who is Jesus' father, O Commander of the faithful?". "Jesus had no father", said Harun. Al-Kadhim argued that God, in these verses, had ascribed Jesus to descendants of the Prophets, through Mary, saying "similarly, we have been ascribed to the descendants of the Prophet through our mother Fatimah".[25] It is related that Harun asked Musa to give him more evidence. Al-Kadhim thus recited the verse of Mubahalah, and argued "None claims that the Prophet made someone enter under the cloak when he challenged the Christians to a contest of prayer to God (the Mubahalah), except ‘Ali, Fatimah, Al-Hasan, and Al-Husayn. So in the verse, 'Our sons' refers to Al-Hasan and Al-Husayn."[25]