Tags: boy hunting trip animal cruelty
July 25th 2017
View original
Goose, sheep, dogs, pigs, and cows have all been raped in South Africa. Yes, forced sexual relations between humans and animal isn’t new to the country. Recently, BuzzSouthAfrica reported about an SA man caught pants down raping a lame goose. Aside that, some Grahamstown youths were once busted gang raping a dog. In Mpumalanga, another man was shot while resisting arrest when he was caught making love to a pig. 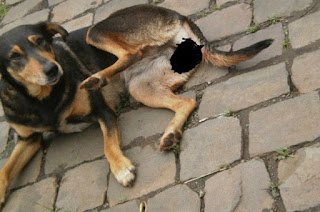 We all read about the Pretoria woman guilty of having sex with two dogs. Like we did the Transkei man jailed for 12 month without option for fine when he sexed a sheep. That’s not all, a Free State farm worker was arrested when he was nabbed with his trousers down his knees mating a cow.

Now, three SA boys are set to face criminal charges of Animal Cruelty for gang-raping a dog in Hebron, north of Pretoria. The boys reportedly borrowed the dog for a Hunting Trip only to gang-rape the creature. Confirming this, SPCA spokesperson Michael Motloung related that criminal charges of animal cruelty have been laid against the boys. “We have opened a case against the three boys and the police are now handling the matter and taking it forward,” Motloung said. With that, he related that the boys recently asked the owner of the dog to allow them take the dog along on a hunting trip. “We only got to know of their actions after one of them told a friend at school last week. The school called the dog owner and their parents. That’s when they all confessed to committing the crime,” Motloung related.

He further disclosed that SPCA took the dog to a doctor for tests. And, is determined to pursue the matter. “We have to send out a message that animals cannot be abused for whatever reason. This is a shocking incident,” Motloung asserted.