Mother feeds daughter with Heroin and keratin because she was in love.!

A mother who fed her four-year-old daughter sedatives under the guise of "Smarties" because she was an "inconvenience" to her love life has been jailed for 13 years.
Michala Pyke, 38, gave little Poppy Widdison Drugs to sedate the youngster which she referred to in text messages as "blue Smarties". 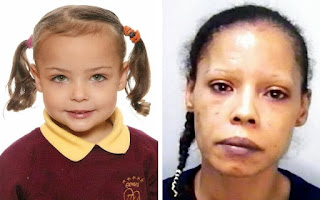 Poppy was later found unresponsive, blue and not breathing in the home Pyke shared with her drug dealing partner John Rytting, 40, in June 2013.
A post mortem into her death proved "inconclusive" but doctors traces of a drug cocktail with heroin, ketamine and sedatives including diazepam in her hair follicle.

Read Also:
Caught pants down with Best Friends husband
Man Buried with $5700 to Bribe God
Pyke and Rytting were convicted of serious child cruelty offences against Poppy following a trial at Hull Crown Court, East Yorks.
Rytting was also jailed for 13 years alongside his former flame for dragging the child into a "swamp" of drugs and forced her into "unremitting degradation".
Judge Jeremy Richardson, QC, told Hull Crown Court on Thursday the pair had "blighted the life of a pretty, vivacious little girl".
Chillingly, he also highlighted that the little girl had been named after the very plant from which heroin - which her mother was addicted to - comes from.
Jailing Pyke and Rytting each for 13 years, Judge Jeremy Richardson QC said: "Poppy was born in tragic circumstances - like her mother, Poppy was born addicted to heroin.
"The baby was given the name Poppy - the very name of the plant from which heroin is derived. That is unlikely to be a coincidence
"Poppy was born addicted to heroin and you plunged that infant into the mire of drugs. You were both living in the swamp of drug addiction and drug peddling.
"The short life of poppy was blighted by drugs - you [both] fed drugs to poppy for your own baleful romance while living in a mire of drugs.
"The abuse lasted several months and drugs were administered in that time. You Pyke treated your daughter badly and changed your demeanour in front of others.
"You both were the masters of unremitting degradation and authors of this horrific ordeal. You both bear huge responsibility for blighting the life of a pretty, vivacious little girl.
"Pyke you are malevolent and manipulative - you are utterly unfit to be a mother and abused Poppy by giving her drugs. This was serious cruelty over a long period of time and regular ill treatment."
While the sentencing remarks were given by the judge, Pyke, who sported a blue fleece jumper, did not show any emotion.
Rytting replied: "Whatever."
Prosecutor David Gordon said cops found 700 diazepam and over 300 temazepam tablets when they raided the couple's house in Grimsby, North East Lincs., after Poppy's death.
He said Rytting had bought the tablets from suppliers predominantly based in Asia before selling them on.
Mr Gordon said: "Text messages were found on Rytting's phone from customers asking for diazepam using the code and asking for 'blue'."
The pair had pleaded guilty to a minor child cruelty offence of subjecting a child to an environment in the presence of drugs on the 11th hour prior to trial.
Pyke also pleaded guilty to child cruelty by emotional abuse after neighbours heard her calling Poppy a "little bastard".
But Pyke and Rytting were both found guilty of serious child cruelty of administering prescribed/control drugs to Poppy.
Rytting, of Grimsby, North East Lincs., who admitted one count of importing drugs and two counts of supplying controlled drugs, was also convicted of possessing cannabis with intent to supply.
Pyke, of Hull, East Yorks., admitted a charge of supplying methadone, was found guilty of possessing methadone with intent to supply.
The jury only took two hours to find the pair guilty of all charges and were both remanded in custody on December 15.
Katherine Goddard, for Pyke, said her client hadn't given Poppy any drugs before she met Rytting and traces of two drugs found in Poppy's hair belonged to Rytting.
She said: "Michala Pyke is a damaged and troubled individual. Whatever her battles [Pyke's] with drugs for the majority of her life Poppy was well cared for and loved.
"Michala Pyke managed to juggle her need for drugs and the needs of her daughter. Until Michala Pyke began the relationship with John Rytting, however difficult life was Poppy was well cared for.
"It was the start of this relationship which was toxic, in both senses of the word, that the care she gave her daughter fell away. She is responsible for the death of her daughter morally, not in law."
Timothy Roberts, representing Rytting, told the judge that his client shouldn't be held as responsible as Pyke for causing Poppy's death.
Mr Roberts said: "Mr Rytting had been in [Poppy's] life for about six weeks and what can be agreed is that he only had partial responsibility for care of her."
Speaking outside court, Poppy's father Brendan Widdison, said: "We as a family could not contact Michala in the last few weeks before poppy's death.
"However, if we had known... the concerns of the social care, we might have acted differently as a family. We had no concerns.
"The last time we saw Poppy was her birthday - her fourth birthday. She was her normal, happy self, pleased to see us and excited about her birthday.
"We as a family could not have forseen what would have happened and in this case we don't believe social care could have either.
"Thank you all very much. We would also like to say thank you to the police and everybody involved in the case."


This post first appeared on Odd News, please read the originial post: here
People also like
Drug Repurposing II
Brittney Griner's Cannabis Charges In Russia: What's Next For The WNBA Star?
How to Take Proper Care of Your Teeth
Microbiome

Mother feeds daughter with Heroin and keratin because she was in love.!