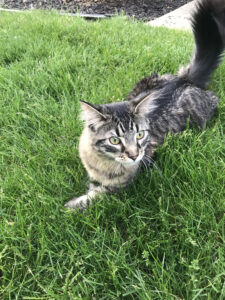 Our indoor cat has decided he would like to transform into an outdoor cat. Unfortunately for him, I disagree. So the battle has begun and I am apparently not as smart as a cat (go figure). He has been outside at least a dozen times in the past week. Every time I open a Door, he tries to bolt outside. This is especially tricky when my kid is walking in from school with a backpack, lacrosse stick, water bottle and multiple layers of clothing shed throughout the day. We had developed a strategy where I walked in first to block and then she followed. This worked exactly twice and since then the little furball has taken to darting right between our legs when the door opens. My husband has resorted to weapons and placed a mop next to the door which he uses to corral the beast back indoors. The cat’s counterattack has been to wedge himself under the door so it only opens an inch where he can claw at our feet. We have tried to walk in other doors, but he always manages to beat us to the front door too.

This obsession with freedom seemed to develop after he almost fell out of a second story window. Literally, the cat was hanging by his claws out of our bedroom window. A few weeks ago we opened the window next to his cat tree and he climbed up and lounged in the breeze watching the kids play outside. 10 minutes later my daughter was screaming and my husband was running up the stairs. I looked up to see the cat on the outside of the window hanging by his front legs as if making an attempt to do chin ups on the window ledge. He had managed to completely push the Screen out of the frame and was hanging on the top portion of the open window. I am not even sure how he did it, I was just happy that I was able to grab him before he lost his grip. His feet had hardly touched the ground before he turned around and leapt at the open window again. I had to bear hug him until my husband could get the window closed. I then watched my husband hanging from the side of the house while he tried to reinsert the screen. We have kept that window cracked only an inch since then and the little man still hangs his front paws outside. 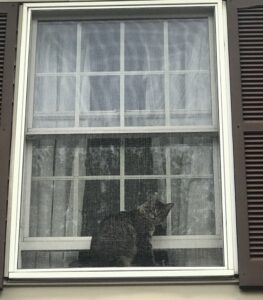 We occasionally leave other windows in our house open and within minutes the little guy seems to find his way to them where he either climbs up the screen to the top, or pushes at the frame on the bottom in an attempt to escape. He somehow managed to pop the screen out of the track in one of the doorwalls and get his claws stuck in a screen after climbing to the top of an almost closed window. He is like a little mouse squeezing his body through openings the size of a lemon. All of our screens also now look like someone took a razor blade to them. Pretty soon they will resemble swiss cheese and will be completely useless in keeping one critter in and countless insects out.

I think the worst part of this imprisonment is hearing the poor little furball cry every time anyone leaves the house. He stands at the garage door and meows at the top of his lungs each and every time a human leaves the house. Whoever is left in the house with him spends the next 10 minutes trying to get him to relax and stop yelling. When the whole family leaves him, he reacts by pulling all of the rubber seal from the bottom of the door bit by bit. We come home to find mounds of soggy rubber bits all over the rug.

I was about to give up and just let the little man run free until I remembered the late nights waiting up for our previous kitty to return. Somehow I think this little guy would be even later to come home based on the fact that he is a stubborn little shit. Instead, I made a compromise. I bought him a kitten leash. If he wants to act like a dog and beg at the door, I am going to treat him as such and bind him to me with a rope. My husband is laughing at me, but he’ll be grateful when he doesn’t have to replace the screens. Although, somehow I see me getting dragged through the grass on my knees by a 10 pound cat the first time he tries to chase a squirrel. As with most things, this will probably not end well for me.

**I wrote this while listening to Fugazi because we discovered Brody (the punk rock cat) only likes Ian MacKaye’s first band so I’m trying to change his mind. Go figure!**

This post first appeared on No, Seriously..., please read the originial post: here
People also like
Finding the Best Watch Repair
Have transaction data from all your sources joined in one place
Carpenter Ants in House
[Extended ECQ Advisory] #ExtraCareAtHome: Globe committed to deliver service support to customers under extended ECQ
“The Friend Who May Not Seem a Friend” – The Cat and the Fire, Post 2 of 3