To relate to all the memes and groups titled “You are a true 90s kid if”, boy decides to change his date of birth to the 90s

Mumbai: Shashank Awasthi, a 14 years old boy who was born on 29th January 2002 has decided to get his date of Birth changed to 29th January 1992 . When asked the reason behind this decision, he said he also wanted to miss the 90s like thousands of others on the internet. 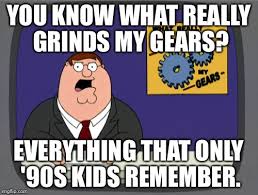 Even Peter Griffin is fed up of the 90s kids

Speaking to Faking News, he said,”Ever since I started using internet, I have been observing all these Facebook pages and Groups Titled ‘Only 90s kids will get this’ and ‘Only 90s kids will get that’, as if no kid has been born before or after the 90s. I wanted to be a part of that online group as well. Now that I will be a 90s kid officially, let me see what the fuss is about.”

When we asked whether he knows much about the 90s, he replied, “Oh yes, I have done extensive study on this. There was Sachin Tendulkar obviously. There was Govinda and his clothes. Chandarakanta and Shaktimaan were cool, Baba Sehgal’s tweets were known as the lyrics to his songs and candy cigarette was the only one that kids smoked. Thats pretty much the entire 90s.”

When asked why doesn’t he start his own page about kids of his generation, he replied, “Every smartphone, TV show, Video game and Superhero film already has an FB page. What else will we talk about in a Facebook page for our generation? Pages focused on the 90s kids show them playing outside a lot, what is outside? maybe we can do something there.”

When we asked how does he plan to fake his date of birth, Shashank smiled and said, “I will get a fake birth certificate by paying someone a little bit of money. Some things haven’t changed since the 90s.”

To relate to all the memes and groups titled “You are a true 90s kid if”, boy decides to change his date of birth to the 90s