Flying Carpenter Ants are fascinating and troubling, more specifically for their incredible ability to spread their species. Some people hate them passionately. Others find them incredibly captivating. The more extreme fans of the flying carpenter ants have dedicated their lives to studying these small yet wildly significant creatures.

Why PPE Is Crucial for Health and Saf…
Column: Dear Rick Caruso: Running the…
Shave Den – How to Build Area for All…
Vigro Deep – Groove Cartel Amapiano (…
Featuring the New Release - Not a Fli…

Here you will learn all about flying carpenter ants. You’ll learn about the intricacies of their colony development, their general description, and a closer look at their unique biology. You’ll also learn how to identify these highly socialized ants for yourself.

The colony of flying carpenter ants is something of a marvel.  Carpenter ants are incredibly efficient when it comes to establishing and growing their colonies. They can be somewhat aggressive in this regard. Carpenter ants will not develop the winged reproductive until the colony is mature.  This typically takes about 3-5 years to develop.

The time that larvae spend being nurtured as they grow is arguably the most comfortable phase of their existence. Once larvae develop and turn into worker ants, it’s all downhill from there, no pun intended. Hint hint, anthill, no laughter? Well then, time to continue.

The queen is elegant and artful in evading her male pursuers. One could argue that she is merely playing hard to get, but this would be something of an oversimplification. There is a natural, biological reason for the queen’s erratic behavior. Making it difficult for the males to achieve their goal of mating with the queen ensures that only the fittest and most physically accomplished males will succeed.  Regardless of the weather or the amount of workers foraging, the Queen will continue to reproduce 365 days a year.

By selecting the most athletic male carpenter ants, the queen’s progeny will exhibit favorable traits that will make the colony stronger and ultimately more successful as a whole.

It’s worth noting that the inside of a flying carpenter ant colony, the walls are remarkably smooth. They put a lot of effort into creating smooth walls within the interior of the wood they live. If you were to compare this to a termite nest, you’d find that the termites are much less meticulous as the walls of their homes look rough in comparison.

As beautiful as the quality of a flying carpenter ant colony or satellite nest may be, you don’t want them in your home. 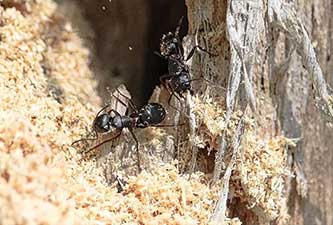 If you thought May Flies had a short lifespan, flying carpenter ants don’t have it much better. The lifespan of a flying carpenter ant ranges from 6 to 12 weeks. This period includes the time they spend from an egg through development, adulthood, etc.

In terms of biology, carpenter ants are refreshingly simple yet remarkably complex. Technically, they start as larvae, which are nurtured and fed by the females of the species. The females feed the larvae by secreting nutritious fluid from their bodies.

It takes somewhere around 4 to 8 weeks for the larvae to develop and mature from their larval state and ultimately emerge as productive worker ants.

As far as their diet goes, flying carpenter ants will readily devour other insects, living or dead. They seek out any protein source they can find and tend to do most of their foraging at night. Those who have the misfortune of hosting carpenter ants in their home will notice they specifically seek out sweet foods like meats and jellies.

How To Identify Flying Carpenter Ants 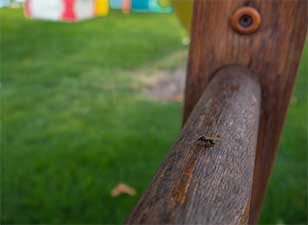 Now that you know more about flying carpenter ants, you can appreciate how complex and fascinating these insects genuinely are. The world is host to millions of insects, but few are as impressive as carpenter ants. These insects remind us that we share the planet with incredibly massive yet remarkably small societies like countless colonies of carpenter ants.

While flying carpenter ants might seem small individually, the colonies they build number in the millions, making them a more substantial presence in our world than many realize. While this introduction has given you some insight into carpenter ants, there is still much to learn!