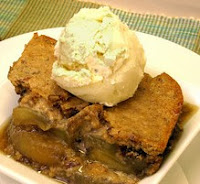 When I became teenager, visiting my father in the country, I started learning to cook while helping my stepmother or under her supervision.  My stepmother saw I enjoyed baking, so she let me independently make one or two desserts a week for the family during summer break.  Whatever dessert I made typically did not last more than one night  as there were usually 10 or more of us at dinner time.  If she made a large dinner, then instead of having dessert immediately after the meal, we would have it as a night-time snack while playing cards or a board game that evening.  Each week during our summer stay with them,  my stepmother bought me a different boxed cake mix and frosting mix to bake when she went on her grocery trip.  So she could shop quickly, I stayed at home and watched the smaller children so the weekly cake and frosting flavor were always a surprise for me and the other kids.  She also bought us a container of whatever flavor of ice cream (for dessert on a different night) or cola was on sale and lots of fruit for snacking.  Yes in the "old days" stores featured an in-store overstock or new flavor special along with "loss-leader" ads.

Although I rarely made a cake from scratch, I did occasionally make cookies and this pie recipe that I got off a flour bag from scratch.  All my brothers enjoyed peanut butter cookies, but Bobby's favorite was Apple pie.  I made this pie several times one summer as we were given a big basket of apples by a local farmer.   One memory I really cherish is going home at the end of the summer and having my brothers tell my Mom, "Shirley makes cookies just like yours and just as good too."  Then Bobby (who rarely gave anyone compliments) added "She also makes the best apple pie you ever had."  When I showed my recipe to Mom, she said it did sound good but she would call it a cobbler instead of pie because it does not have a bottom crust.

Subscribe to Organize This With Style! (aka Org This)