Why Are My Spinach Leaves So Small And How To Fix It?

As a first time gardener, you sure have a lot of questions regarding your plants. May it be how to start growing, what materials are needed, which plants should you grow, etc.

If you have spinach in your garden or you are planning on growing one, this article could be of help.

One of the clear signs that your spinach plant is performing poorly is when its leaves are visibly tiny. When this happens, you have to know first what’s causing this problem and then attend to it appropriately. To help you get started, below are some of the possible causes of why your spinach has small leaves including the things you can do to fix this problem.

So what can cause your spinach plant to grow small leaves? It could be an extreme high temperatures, too little or too much water, lack of full sun exposure, poor soil, or other plant diseases such as downy mildew, cutworms or fusarium wilt. 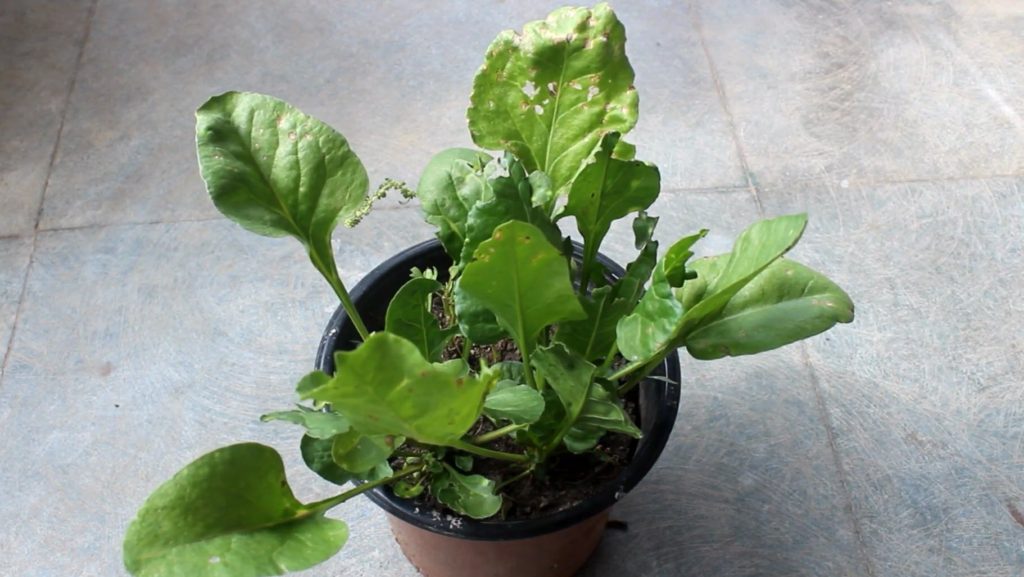 Spinach prefers to be grown in areas with temperatures between 60 and 65 degrees fahrenheit. Once it increases to, say, 85 degrees F, there is a huge chance that your spinach will manifest some growing problems. For instance, when a spinach plant is exposed to extremely high temperatures, its leaf production will most likely slow down, and not just that— it could also be producing smaller, unhealthy leaves. High temperature also greatly contributes to bolting which can result in making your spinach taste bitter.

To fix this, you can cover your spinach with some shade cloth to somehow cool down its environment or better yet plant it during the cooler seasons.

Spinach needs constant moisture as it grows so it is recommended to provide your plant with about an inch of water once a week, but during the warmer months, you can add another half an inch rto make sure that your spinach does not lack in water. But, be careful as well not to overwater your plant because it also would not thrive well in soggy soil and excess water may lead to more serious damages.

While spinach loves constant moisture, it also thrives better in a well-lit environment. This means that it requires full sun exposure for at least 6 hours a day in order to encourage growth and to avoid your plant from producing small and unhealthy leaves. Insufficient full sun exposure does not only hinder your plant’s leaf production but it can also affect the quality and taste of your spinach leaves.

So, in order to fix this problem, see to it that you provide your spinach with an adequate amount of sunlight. It can also tolerate some shade but the exposure might need to be longer than usual.

One of the possible causes as to why your spinach grows poorly, production of smaller leaves included, is because you failed to prepare the soil prior to planting. Yes, that is right. In growing spinach, your task does not only start with planting but in preparing the resources as well. Failing to do so can lead to low performance of the plant and to some extent, its demise.

To be able to avoid this from happening, apply some slow-release, high-nitrogen fertilizer into the soil at least about a week prior to planting. This should give your spinach a good head start. You may continue feeding it with fertilizer after it has produced at least four young leaves.

Other growing problems and diseases

Spinach is known to be an incredibly healthy vegetable rich in plenty of nutrients and vitamins. But, this does not excuse spinach from having growing problems, whether it’s caused by pests, fungi, viruses, or man-made. Below are some of the common diseases that strike on spinach plants along with their respective remedies.

Downy Mildew is easily spotted when the surface of the spinach leaves have yellow or light green spots on them and some apparent fungal growth, usually white or purple-ish in color, on the underside of the leaves. Severe downy mildew infestation also causes curling of leaves and deformation.

While there is no specific cure for this kind of plant disease, the best thing that you can do is remove infected leaves, or the plant itself so the fungal disease will not spread across other plants. It will also be helpful if you provide adequate space between each plant to improve air circulation. To prevent downy mildew from damaging your spinach, avoid watering overhead to keep the foliages dry.

Cutworms are larvae of night-flying moths and considered as one of the common pests that feed on spinach. While the mature moths do not directly destroy spinach plants, their larvae or cutworms aggressively feed on roots and ground level stems. Compared to mature foliages, cutworms are more attracted to new growths as they appear to be more tender.

During the day, cutworms may not be that easy to spot as they hide beneath the soil. They usually come out at night and feed on the base of the plant. To get rid of cutworms, you can simply pick them out of the spinach and destroy any remaining cutworm eggs remaining on the plant. Spraying some pesticides will also help in a faster way.

Fusarium wilt in spinach starts from the roots and when untreated may spread rapidly across the entire plant, thus it initially destroys older foliages that are found at the base of the plant. Since this fungal disease heavily damages the roots, the plant is unable to take up enough nutrients to sustain its growth, thus leaf discoloration and wilting is manifested and black bruises can be seen on the roots.

To make sure that your spinach is protected from Fusarium wilt, see to it that the area where you intend to grow your spinach is well sanitized and debris-free. You should also immediately eliminate plants that are infected with Fusarium wilt to avoid further spreading.

The symptoms of white rust on spinach includes yellow spots on the surface of the leaves and clusters of white bumps on the underside. When left untreated, these white spots may spread even on the upper portion of the leaves which will eventually result in falling off of the leaves.

White rust is formed in cool, moist conditions, thus the formation of water molds. To avoid White rust from spreading any further, you must pick out the infected leaves off of the plant. It is also recommended to water your spinach early in the morning to let the plant dry out during the day.

To be able to successfully grow and harvest spinach, you should be able to know what growing conditions your plant requires and what preparations are needed prior to planting. Below are just some of the tips that you can apply when growing your own spinach plants.

Although spinach is known to be growing well in a rather mild climate and does not respond well in extremely high temperatures, it still requires some full sun exposure to be able to grow vigorously. It can also tolerate some shade, however the quality of the crop may not be as pleasing as the ones exposed to full sun.

Spinach thrives in a well-draining yet constantly moist soil. Ideally, you should water your spinach once or twice per week, especially in warmer conditions. Similarly, you have to be careful not to overwater your spinach or else it will be vulnerable to root rot.

As your plant grows and produces new foliage, make it a habit to thin them regularly to avoid overcrowding and competition among new seedlings. Thinning your spinach will also improve air circulation that can help avoid diseases such as downy mildew.

If you cannot provide your spinach with soil rich in organic matter which results in a poor performing plant, you may troubleshoot this by feeding it with nitrogen-rich fertilizer. This should help in keeping your spinach healthy and produce more leaves.

Remember to remove any hard rocks from the soil before applying the fertilizers and pull any weeds that may compete with the spinach for the nutrients provided by the fertilizer.

We may be all familiar with the strongest sailor there is— Popeye— and his love for spinach. Just like how it is shown in the cartoons, Spinach makes him stronger and healthier than ever. In reality, spinach is also rich in many vitamins and nutrients that us humans need in order to keep our bodies healthy. Below are some of the known benefits of spinach.

Spinach contains zeaxanthin and lutein which are essential in keeping our eyes healthy. These properties also help in preventing chronic eye conditions such as cataract and total blindness.

For people who are struggling with their fluctuating blood pressure, consuming spinach on a regular basis can help regulate and normalize blood pressure level.

Since spinach contains plenty of vitamins and micronutrients such as Vitamins A, C, and K, as well as iron, manganese, and magnesium, it is for a fact that eating spinach can help improve one’s immune system, strengthen bones, promote healthy heart, and repel viruses and other diseases.

The post Why Are My Spinach Leaves So Small And How To Fix It? appeared first on Plant2Harvest.

Why Are My Spinach Leaves So Small And How To Fix It?

Subscribe to All You Need To Know About Gardening