Shatavari also boosts testosterone levels in males. It may be beneficial to diabetics since it aids in the control of blood glucose levels. Because of its antioxidant properties, Shatavari may help to improve memory.

Shatavari, according to Ayurveda, promotes immunity and aids weight growth through its Rasayana (rejuvenating) properties.

To obtain relief from the symptoms of premenstrual syndrome, consume Shatavari capsules twice a day.

Wrinkles can be reduced by taking Shatavari capsules. It can also enhance wound healing.

People with poor digestion should avoid Shatavari since it is Guru (heavy) in nature and may take some time to digest.

Shatavari capsules are an essential medication that has been used in subtropical and tropical India for centuries. Sarsasapogenin and four saponin compounds known as Shatavari I-VI are found in it. Traditional medical systems such as Siddha, Unani, and Ayurveda all contain this medicine.

Shatavari is commonly used to treat galactagogue, dyspepsia, gastric ulcers, and other digestive issues. There has been researched that shows the Shatavari herb is effective in treating nerve disorders, and Shatavari has been utilized in many health tonics to improve resistance or hyperacidity.

The most essential herb for women in the Ayurvedic herbal pharmacy is Shatavari, technically known as Asparagus racemosus. Traditional uses of this herb include supporting and tonifying the female reproductive system. It has been used to help women who are nearing the end of their menstrual cycle by promoting circulation, a healthy neurological system, and proper hormonal activity. It's also referred to as a general reproductive tonic. Shatavari capsules can be used for all stages of a woman's reproductive cycle, from menarche (the onset of menses) to menses, ovulation, and fertility, as well as symptoms including hot flashes, irritability, unreliable memory, and dryness during menopause. Shatavari also promotes the development of Ojas, our inner vitality, and the source of immunity, virility, and restful sleep. 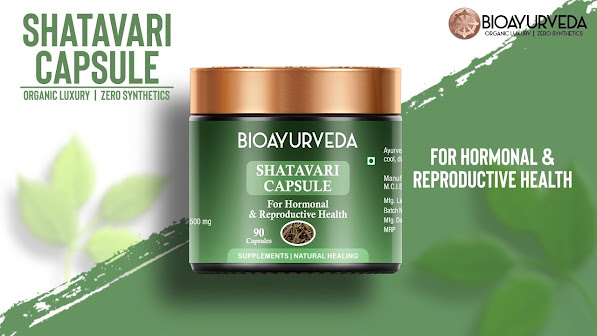 Shatavari is a widely used vitamin for a variety of ailments. It comes as a capsule, powder, or liquid essence that may be commonly prescribed.

Shatavari appears to provide the following health advantages, according to research:

Ayurvedic medicine believes Shatavari is completely safe for long-term usage, including during pregnancy and nursing. Still, there isn't any scientific data on Shatavari supplementation's adverse effects. Women who are pregnant or breastfeeding should avoid using it until additional research has been completed and it has been confirmed to be safe. Some persons who take Shatavari have reported allergic reactions. If you have an allergy to asparagus, stay away from this product. If your asthma or allergic response symptoms are getting worse, see a doctor.

For millennia, ayurvedic medicine has employed Shatavari. However, there haven't been enough human trials to suggest it for any medical problem. It is, however, safe to take in little amounts, and doing so will allow you to benefit from its antioxidant and immune-boosting properties.

If you want to take a greater dose of Shatavari capsules, see your doctor first before doing so. They can discuss your specific risks and advantages, as well as address any concerns you might have.