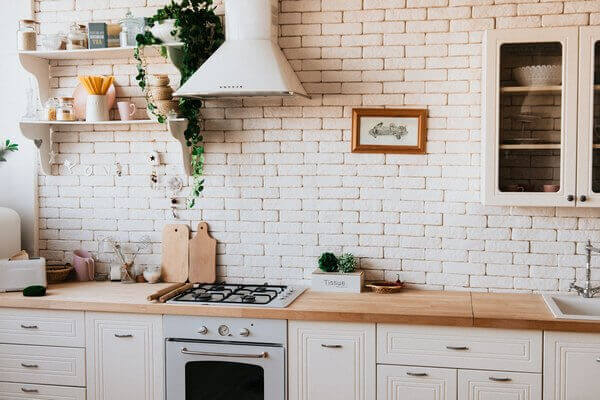 You’ve accidentally burnt something on the stove, and now the whole house stinks. Sounds familiar?

If you’ve been in a similar situation, an Air Purifier can be the best thing you buy for your kitchen. Not only will it keep the odors and smoke particles at bay, but also ensure there aren’t any bacteria and harmful gases creeping around in your kitchen.

Below, we’ll help you find the best air Purifier for cooking odors by reviewing the top five options. We’ve also included a buying guide and some other helpful tips, so keep reading! 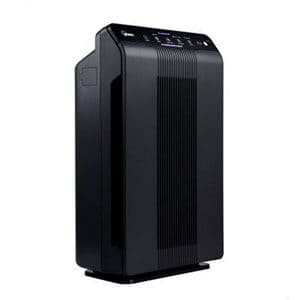 The top performer in this list is the Winix 5500-2, and it’s not hard to wonder why. This bad boy is an all-rounder with its powerful performance, easy to use controls, and smart sensors.

The 5500-2 can clean the air in up to 360 square feet, which is perfect for a medium-sized kitchen. It cleans it in three steps, which include a washable carbon, true HEPA, and Plasmawave filter.

Plasmawave involves releasing hydroxyls into the air that neutralizes viruses and other germs, and this particular feature sets this device apart from others.

Moreover, the auto-mode in the 5500-2 is super quick to detect smells and adjusts fan speeds accordingly. The LED indicator, which shows whether there’s a contaminant in the air, is also pretty responsive.

Plus, this device will be much quieter than most air purifiers of this size, even on high fan speed.
Simple yet convenient controls, low noise pollution, and a minimalistic, sturdy build make the Winix 5500-2 the best air purifier for kitchen smells. 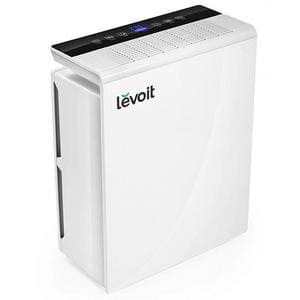 If you don’t want to spend a ton but still want something powerful, the LEVOIT LV-PUR131 can be a good choice for you.

Right off the back, you can tell that the device is sturdy and durable. It’s made with hard, white plastic that has a black control panel on top. The buttons are touch-controlled with a digital display in the middle, making the device look elegant and modern.

The controls include a quiet and auto-mode with an LED indicator. And with three settings for its powerful fan, it can easily cover up to 360 square feet.

As for the noise level, the device is remarkably quiet on its low setting, though you might find it a bit noisy when on high fan speed.

Even though it doesn’t have a CADR rating, the LV-PUR131 does a great job of removing odors and pollutants from the air. And considering the reasonable price, it can be quite a satisfactory purchase. 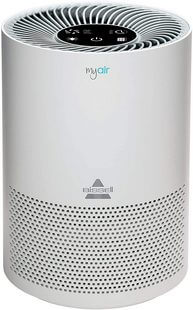 Buying a worthy air purifier usually leaves your pockets considerably lighter. However, that won’t be the case with the Bissell 2780A, as it packs several features into the device with an attractive price tag.

First off, the 2780A has three filters to remove 99% of dust, pet dander, and odors from the air. The prefilter, carbon filter, and HEPA filter together create this effective air purifier for kitchen odors and other pollutants.

Secondly, the 2780A is super quiet, even on high fan speed. And when you run it on Quiet mode, it can give you an almost noiseless operation.

However, budget-friendliness comes with a trade-off – the device can only cover up to 100 square feet. But this also means it’s pretty compact, weighing less than 5 pounds. So if you have a small kitchen, this could be the perfect odor eliminator machine for you.

And while the device lacks some convenient features, it steals the spotlight with its LEDs that serve as a night lamp. So overall, it’s a good catch for a small price. 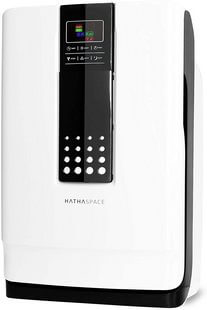 Looking for a super convenient kitchen air purifier? Enter Hathaspace HSP001, a staple in many households for odor elimination.

With its five exhaustive filtration stages, the device eliminates 99.97% of air pollutants, including smoke particles. For further assurance, it also has a CADR rating of 160, so you know it will get rid of any nasty smell.

Plus, it has all the convenience features you could ever want from an air purifier. This includes a remote-control option, which allows you to change the device settings without moving an inch.

It also features a timer that you can set from 1-12 hours. But the best part? Even when running on high, it’s very quiet and won’t add to the noise pollution in a busy kitchen. 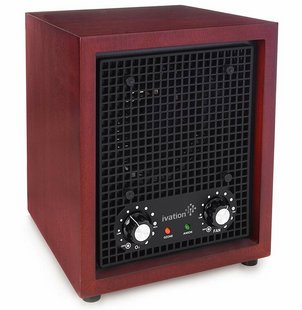 If you’re stuck with a particularly pungent and nasty smell in your house, then the Ivation Ozone Generator Air Purifier might be the perfect pick.

First off, it can cover areas up to 3500 square feet, which makes it one heck of a powerful air purifier for kitchen odors. Secondly, since it makes use of ozone, it’s super effective in eliminating stubborn smells and replacing them with crisp, fresh-smelling air.

This device also has a somewhat attractive exterior with a cherry wood finish and a couple of controls at the front.

However, we don’t recommend that you use the ozone-generating option daily. It produces very high amounts of ozone even on a low setting, which is good news for odor removal and bad news for your health.

On normal days, you can run the ionizer for as long as you need to.

What are Kitchen Odors?

No matter if it’s a residential or commercial kitchen in a restaurant, it will always have one or the other form of odors.

And while some of these include the delicious smell of bacon that can leave your stomach growling, they also consist of bad odors. These include:

Some of these smells are pretty stubborn, such as smoke smell or fumes from burnt food, and can linger around for quite a long time.

But kitchen odors aren’t just limited to food-related stuff. They also include smells from any cleaning solutions that we use or air fresheners.

And while they can cover up the smell of food or trash, they’re strong chemicals themselves, leaving your kitchen with a very intense and uncomfortable scent. In such cases, an air purifier can act as a kitchen smell air cleaner and come in super handy.

Can Cooking Odors Affect Your Health?

It is helpful to know that odors don’t affect your health directly. You won’t get sick just by smelling rotting trash or burning food – the dangerous molecules in the odor is what actually harms you.

For instance, if you’re a regular kitchen stove user, cooking smoke can affect your respiratory health. It contains hydrocarbons, carbon monoxide, nitrogen dioxide, and other toxic gases, which have severe negative effects on your health.

It was found in a study that cooking smoke leads to cough, runny noses, respiratory infections in children, and even serious conditions like chronic bronchitis. But smoke isn’t the only source of harmful gases.

Several studies have concluded that heating various cooking oils to high temperatures can release toxic molecules and VOCs in the air that can cause lung cancer. So the next time you’re stir-frying some Chinese food, you might want to ensure that no smell lingers in the kitchen.

The equipment you use also comes into play. For instance, heating a non-stick frying pan to high temperatures can release toxic fumes into the air.

And to make matters worse, your favorite disinfecting solution or air freshener adds aerosols that may smell nice, but quickly deteriorate lung health.

How to Get rid of Cooking Smells in Your House

While you can’t prevent cooking smells from entering your living quarters, you can remove them quickly. Here’s how:

Since air purifiers don’t come cheap, you want to make sure you’re making the right choice. Here are the features you should look for.

Make sure your air purifier has the right type of filter for your needs:

Also, the replacement filters shouldn’t be costly, as you’ll have to change them often.

Other Things You Need to Consider Before Purchase