Donut or not doughnut?

It's National Doughnut Week from 9 to 16 May. Oh well, one more day to go.. but better late than never, eh? Be it you spell it the British way "Doughnut" or the American way "Donut", it is basically a piece of fried dough. What we all love about this fritter is the seemingly endless possibility of fillings even savoury! Check this doughnut sandwich out! You'll be amazed donuts could be stuffed with lobster.

Back in 2007, the doughnut craze in Singapore was at its peak. You would see long queues of people at every Tom, Dick and Harry doughnut shop. What amazes me is the trend is back again in US. I wonder if it will hit our shores again.

Anyway, my love for Doughnuts exists in the form of Krafna as how we call it in Croatia. It is a bigger version of the British doughnuts. However the Croatian version has many more lovely ingredients including Rakija (Croatian brandy) and lemon zests. The typical fillings are chocolate and apricot jams. One might find custard or Berry Jam too. Finally it is dusted generously with icing sugar instead of rolled in caster sugar.

After obtaining a deep fryer for making doughnuts, I went on to try out the Croatian krafne. I made them bite size and filled them with my own berry jam. And here they are. Leave a comment if you are interested in the recipe. 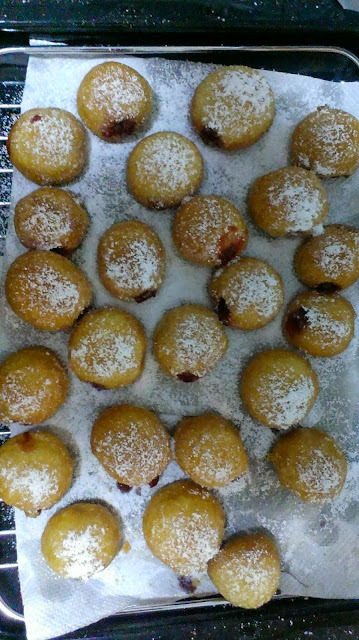 Donut or not doughnut?