One of my (many) side collections is Liddle Kiddle Skediddles. This collection is something my mom started me on and has pretty much funded. Most every birthday or Christmas for the past few years, I’ve received a Skediddle, some in played with condition, others brand new mint in box. The Skediddles in my collection are all themed around big, well-known properties, like Charles Schultz’s Peanuts gang, Disney’s Mickey and, finally, Warner Bros. Bugs Bunny. Below is a picture of the Sears Christmas Catalog from 1969. The dolls featured in this post are seen in the middle right of the page for a whopping $2.99! (Browse Wishbook Web for more catalog pages like this!) 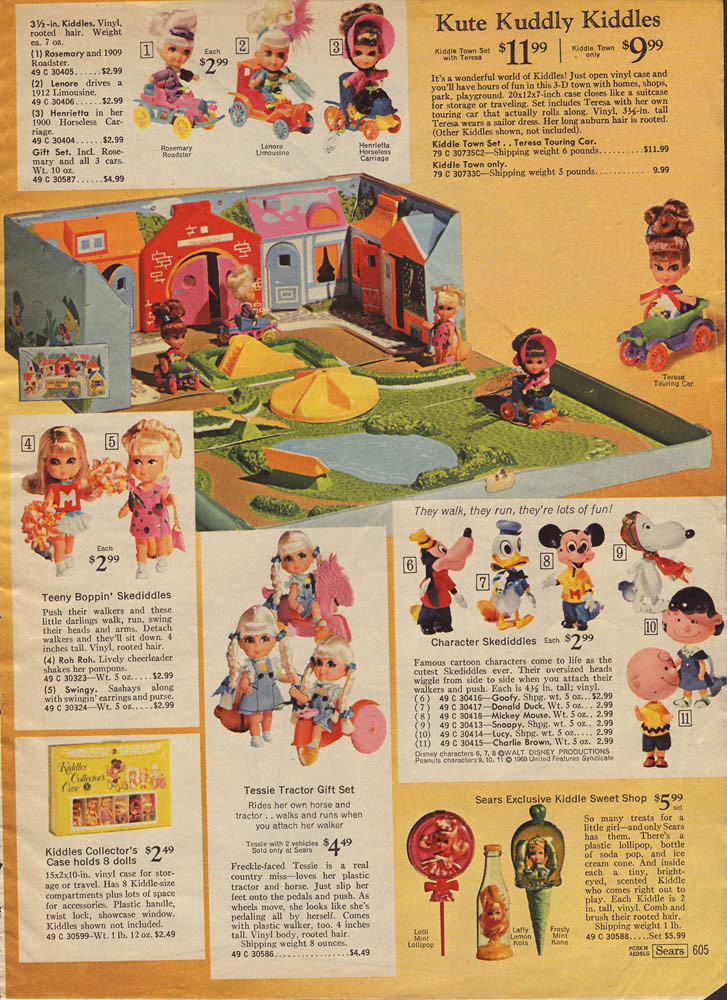 According to the web, Skediddles were made between 1968-1970. What makes Skediddles unique among the Liddle Kiddle line is their ‘Skediddler’, a pusher that makes their arms, legs and head move when you push the Kiddle forward on a flat surface. Most websites says that Mattel produced 13 original Skediddles. However, that number doesn’t take into account the cool Skediddles I’m about to show off here. 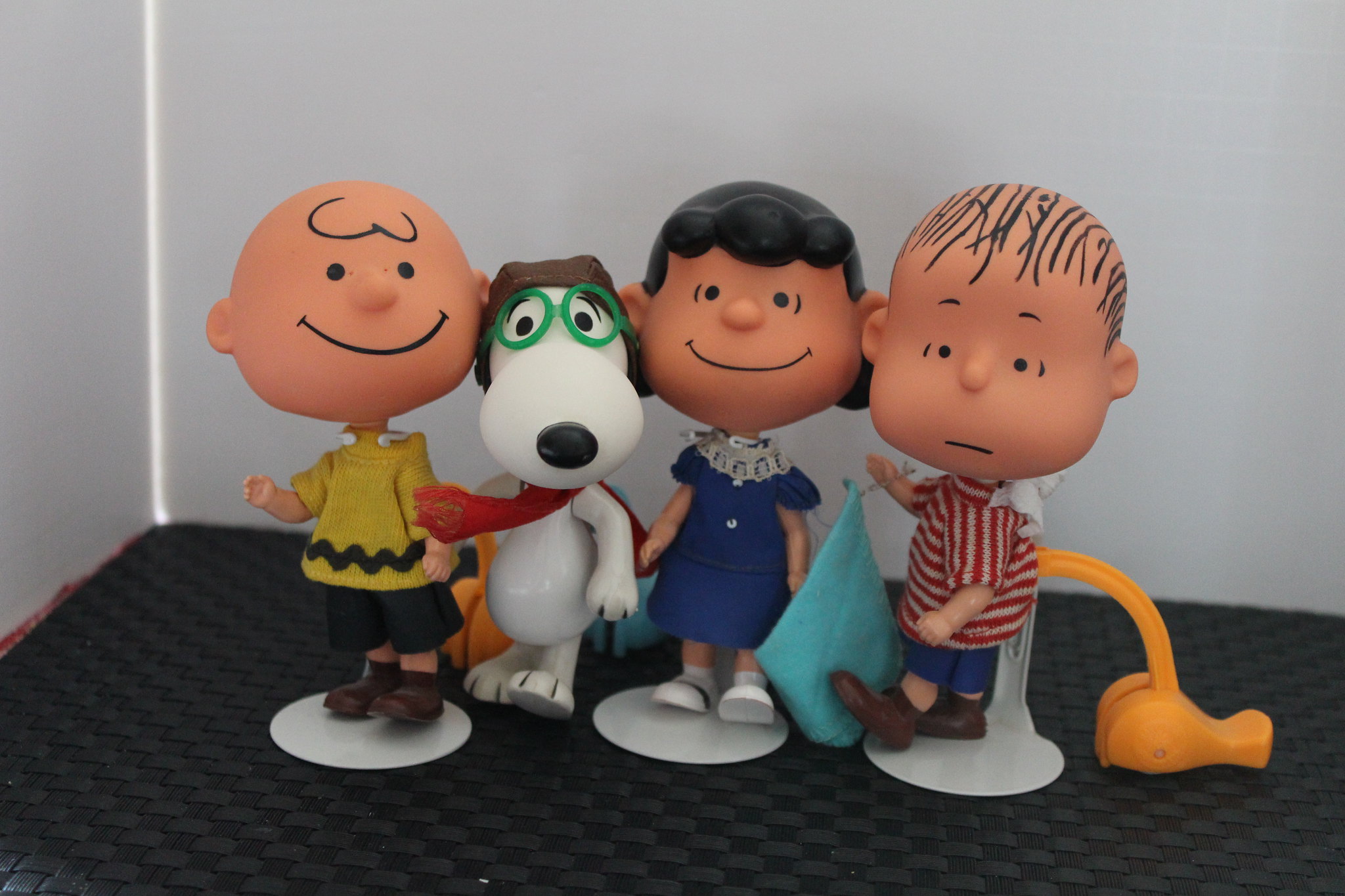 We’ll start off with my the Peanuts gang! Charlie Brown, Lucy and Flying Ace Snoopy were released as Liddle Kiddle Skediddlers in 1968. Sold separately, these Skediddlers are fantastic representations of the comic/cartoon characters created by the legendary Charles Schulz. In 1970, a three pack, the Peanuts Skediddler Clubhouse, was released with Charlie Brown, Lucy and Snoopy. I’ve never seen this three set mint in box, save for one Japanese site with Peanuts collectables. 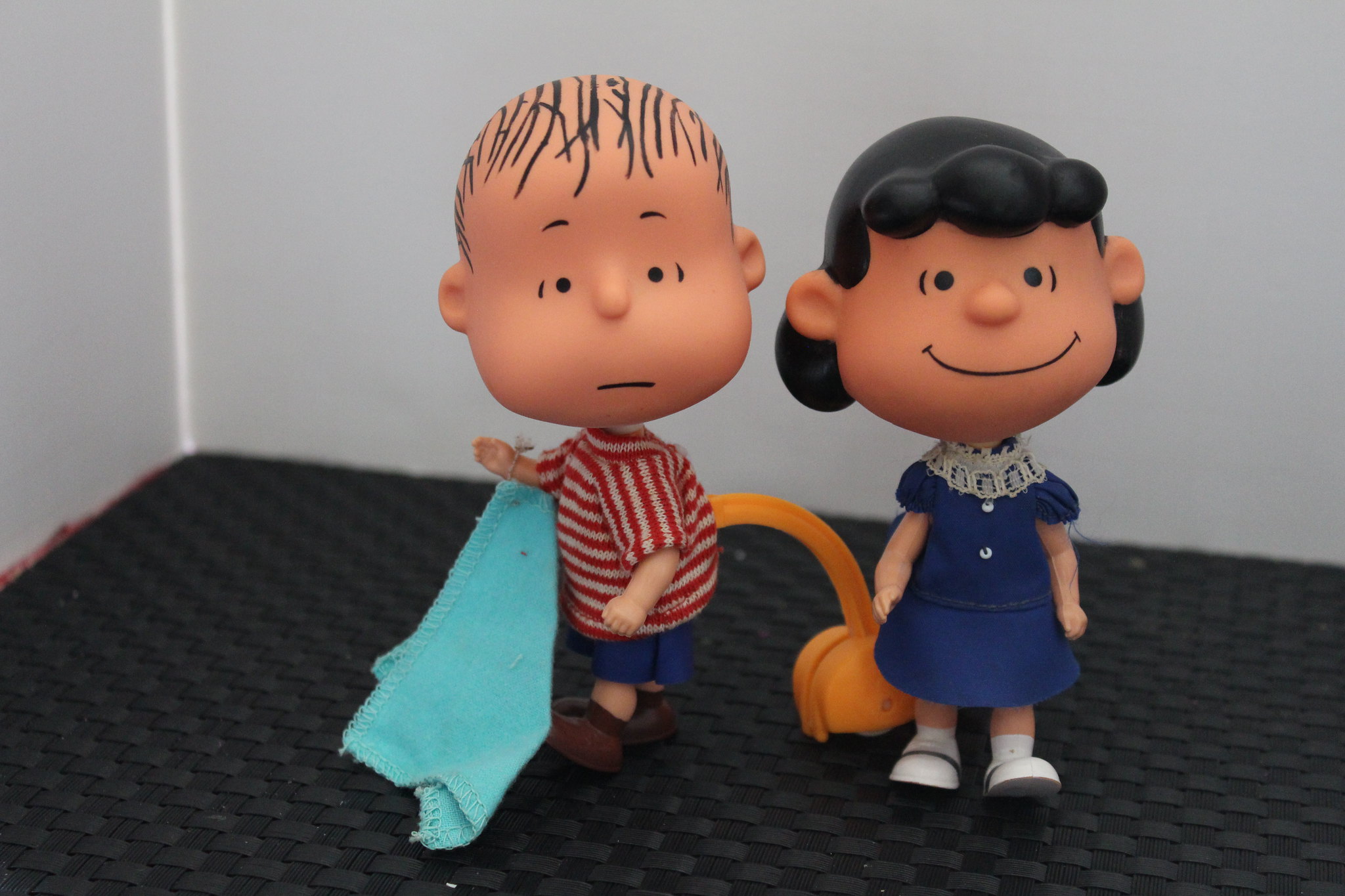 In 1969, Linus was added to the mix, as well as a cool catalog exclusive (or so the internet says) featuring Snoopy and his Sopwith Camel. (I’m still on the hunt for this Snoopy/Sopwith Camel gift set!) Linus is the rarest of the quartet. I wish I had more hard evidence as to why Linus is rarer than the other three, but I wasn’t able to hunt anything down. My best guess is that Linus is the rarest, because he was produced towards the end of the Skediddler line, unlike the other three, who were out on shelves a year earlier. (Notice that Linus is not pictured in the 1969 Sears Christmas Catalog, pictured above.) 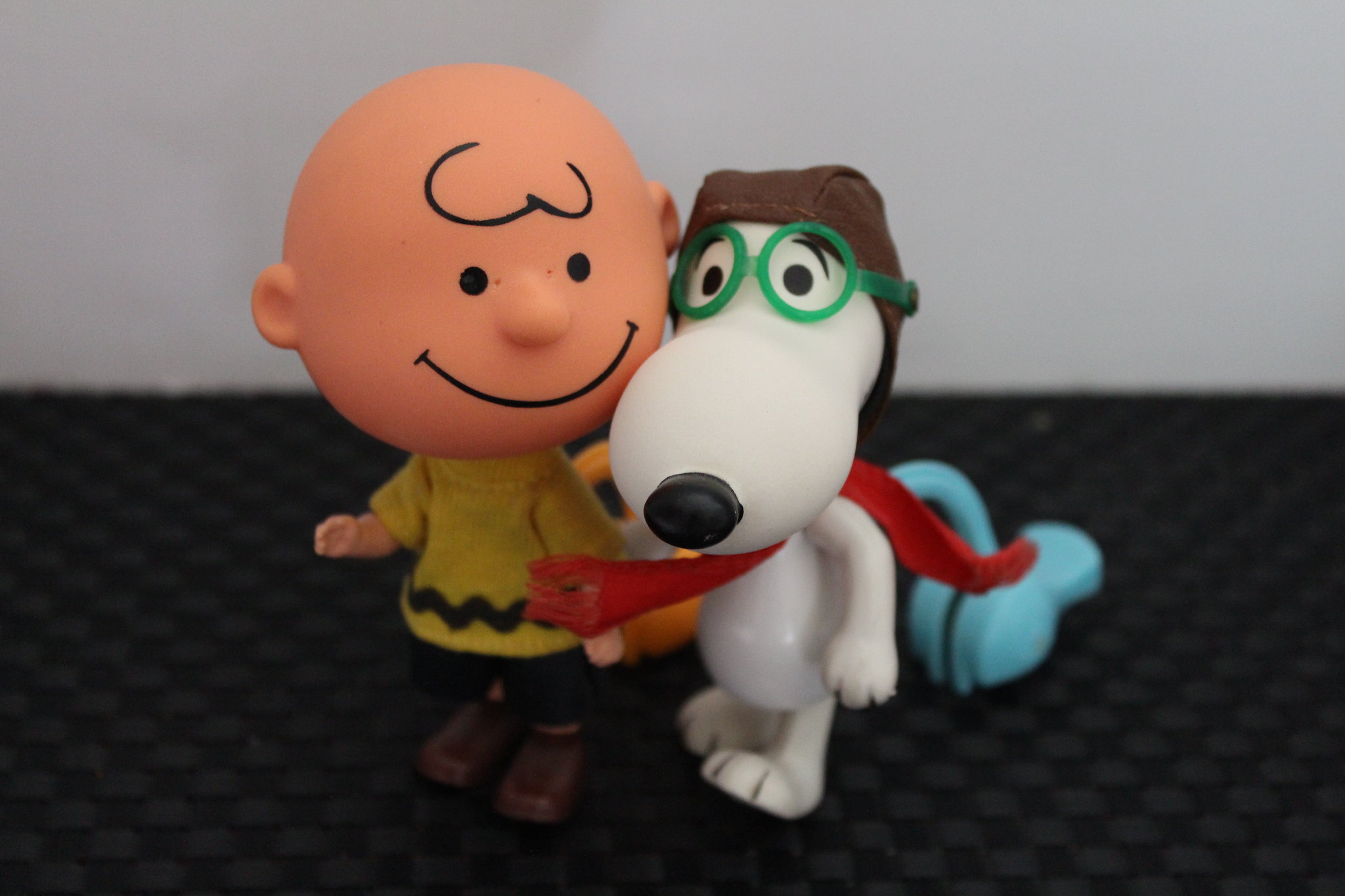 Ironically, Linus fell into our laps. We were at the Kenvention one year, browsing the room sales and Linus was just sitting there with all his accessories. Being a Barbie convention, the vendor didn’t care so much about the lone Liddle Kiddle in the room and my mom was able to snatch him up pretty cheaply! (I didn’t receive Linus until a few months later for my birthday or Christmas– they’re so close together, it’s hard to remember!) 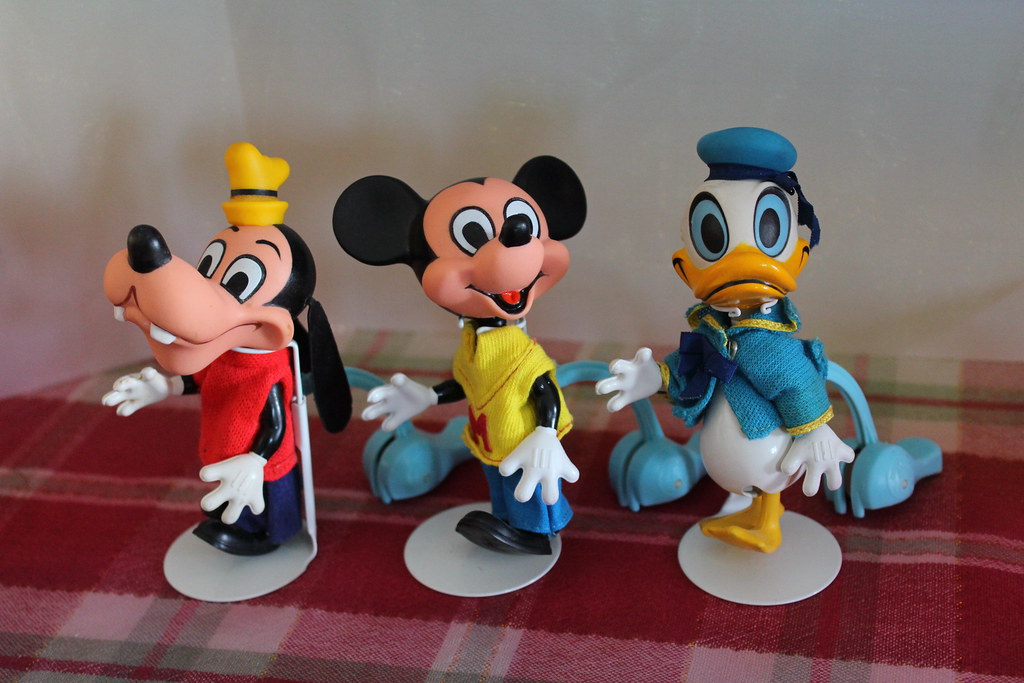 The second series of Skediddles I have found in my possession are themed around Disney’s Mickey Mouse! Arriving on store shelves in 1968, along with the Peanuts gang, were Mickey Mouse, Donald Duck and Goofy. Since the Peanuts gang were released in a three set, I’d imagine these guys were, too, but that’s speculation at the moment. 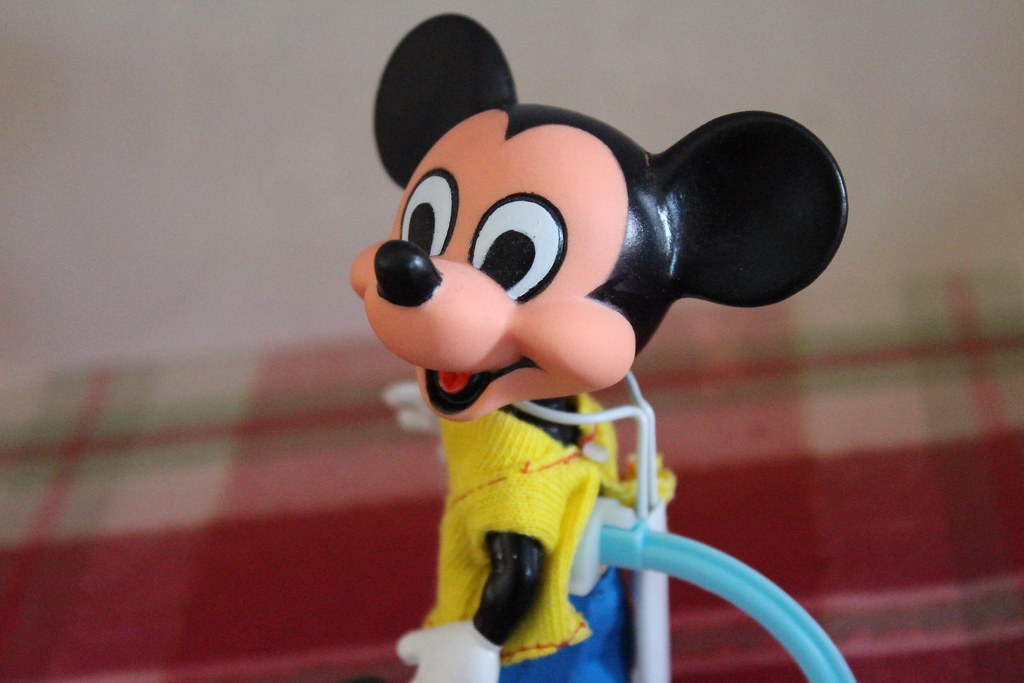 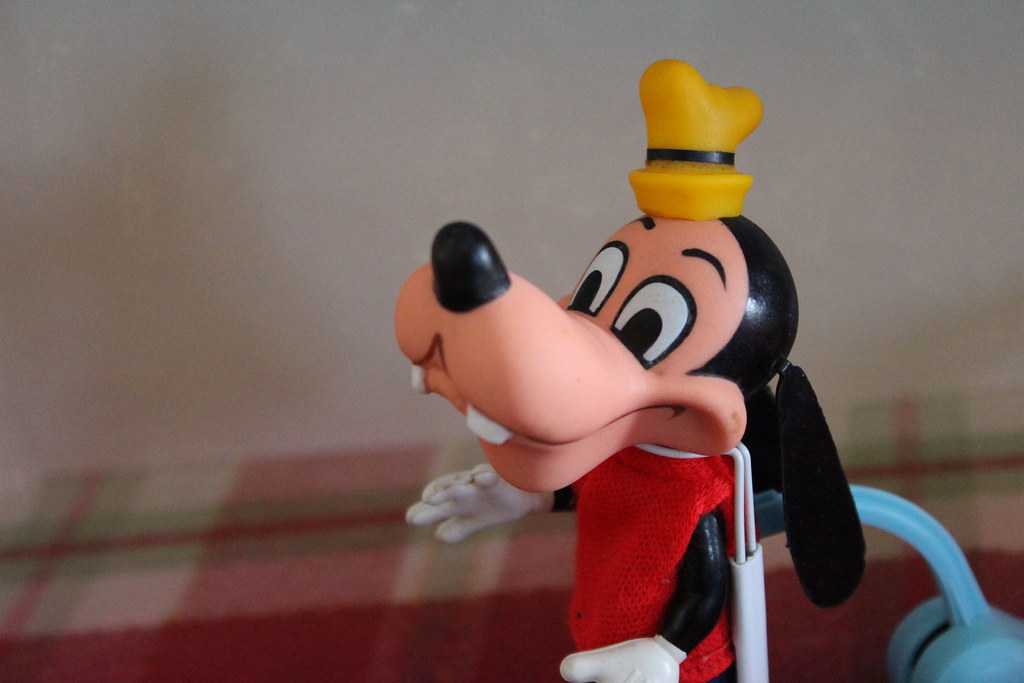 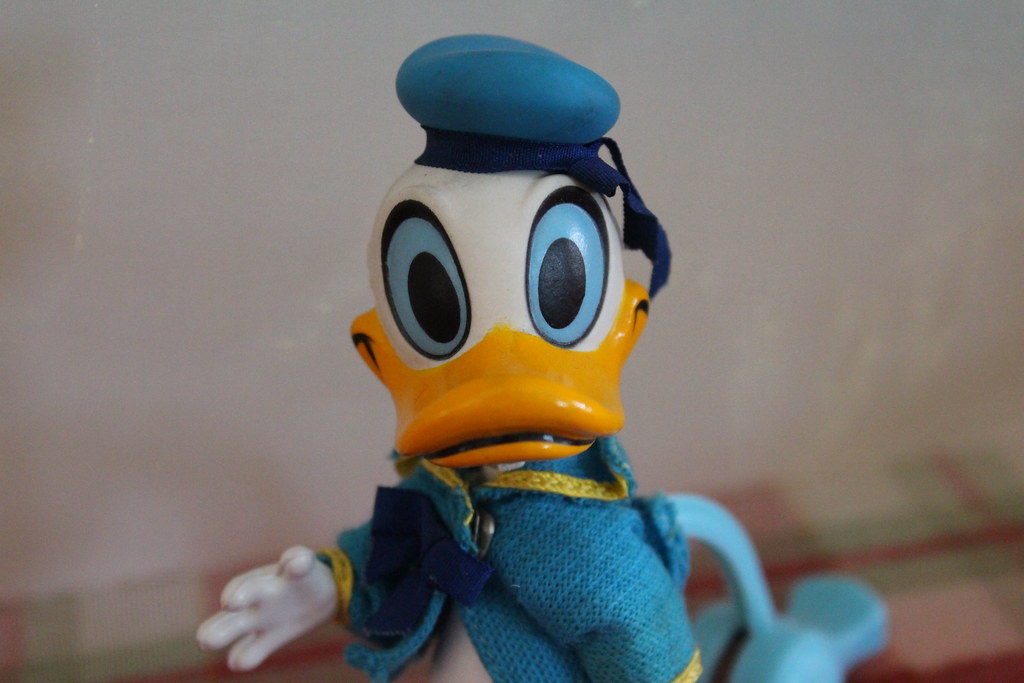 The third series, if I can call it that, centered on the Warner Bros. property, Looney Tunes. Hitting stores in 1969, Mattel only produced one Kiddle in this series and that Kiddle was none other than Bugs Bunny. 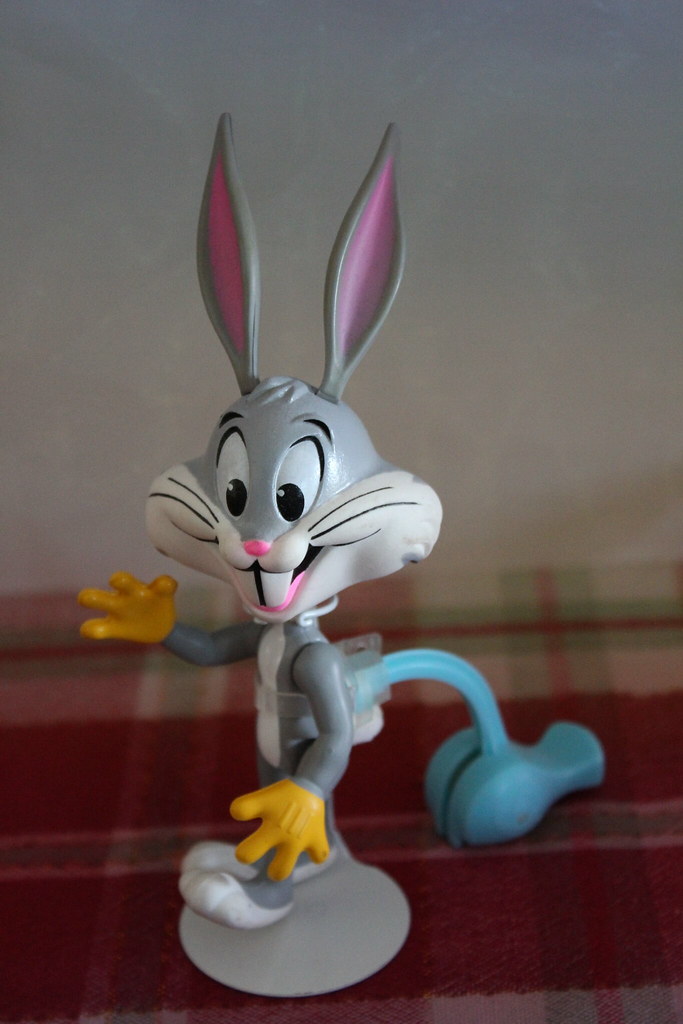 Certain websites will say that Mattel produced Daffy Duck, as well, but as of this writing and lots of googling, I have yet to see an actual picture of this supposed Daffy Duck. My guess is that one site confused Disney’s Donald with Warner Bros.’s Daffy and the rest became internet history. Because Bugs was only produced for a year, he is also considered hard to find. I would have loved to see more characters from this collection, but alas, it wasn’t meant to be. 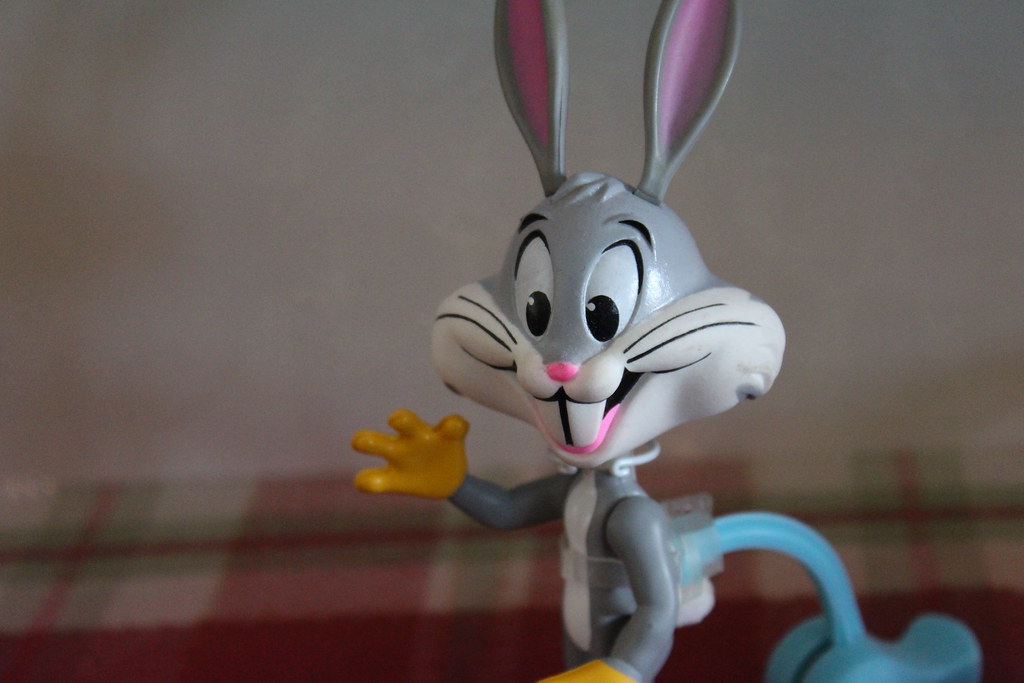 One interesting thing to note about these Kiddles is that they were featured in an episode of Family Affair! Family Affair was a sitcom that ran from 1966-1971 about a bachelor who was forced to take in his nieces (Sissy and Buffy) and nephew (Jody) after tragedy took their parents. The show was quite popular and even inspired Mattel’s iconic Mrs. Beasley doll. 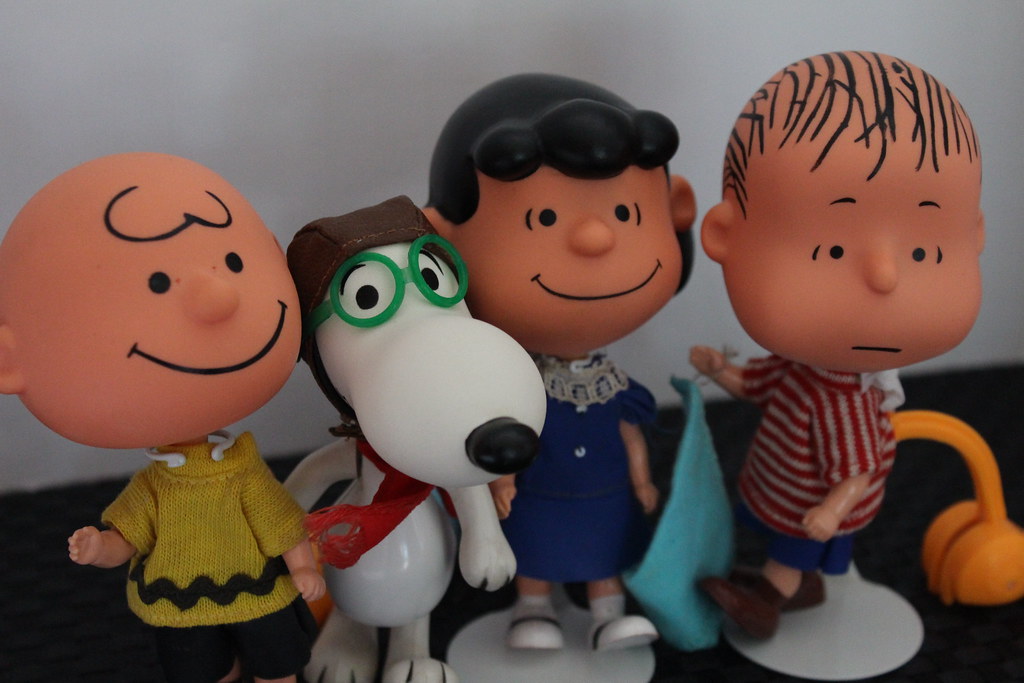 How is this related to the Little Kiddle world, you ask? Well, on February 5th, 1970, an episode called ‘Inheritance‘ aired. In the episode, the kids find themselves with a small inheritance and, of course, decide to go to the toy store to spend it. The toy store set they visit throughout the episode is filled with Mattel products (and only Mattel products) from the late 60’s. It’s like a ‘Where’s Waldo’ (or Wally, for those outside the US) of Mattel products. In one shot, behind the young boy Jody, you see some of the very Skediddler’s in this post, mint in box! Watch the episode here. (Look at the bottom left corner of the screenshot below.) 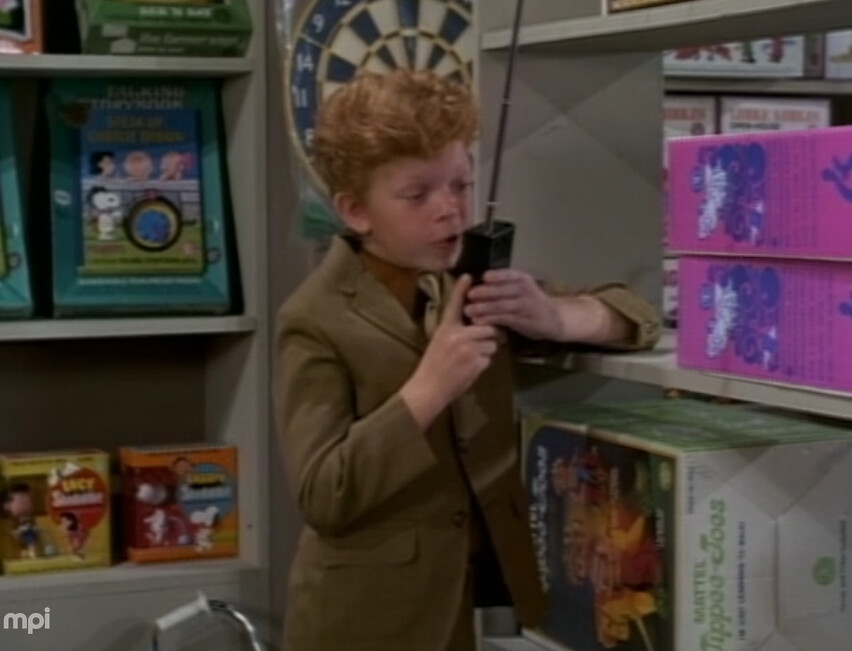 For more fun, see if you can spot your favorite Mattel doll in this 1966 episode, “Mrs. Beasley, Where Are You?“. Buffy loses Mrs. Beasley and Mr. French takes her to the Mattel showroom, I mean, a well stocked, totally generic toy store, to find a replacement. The scene is about 10 minutes into the episode. 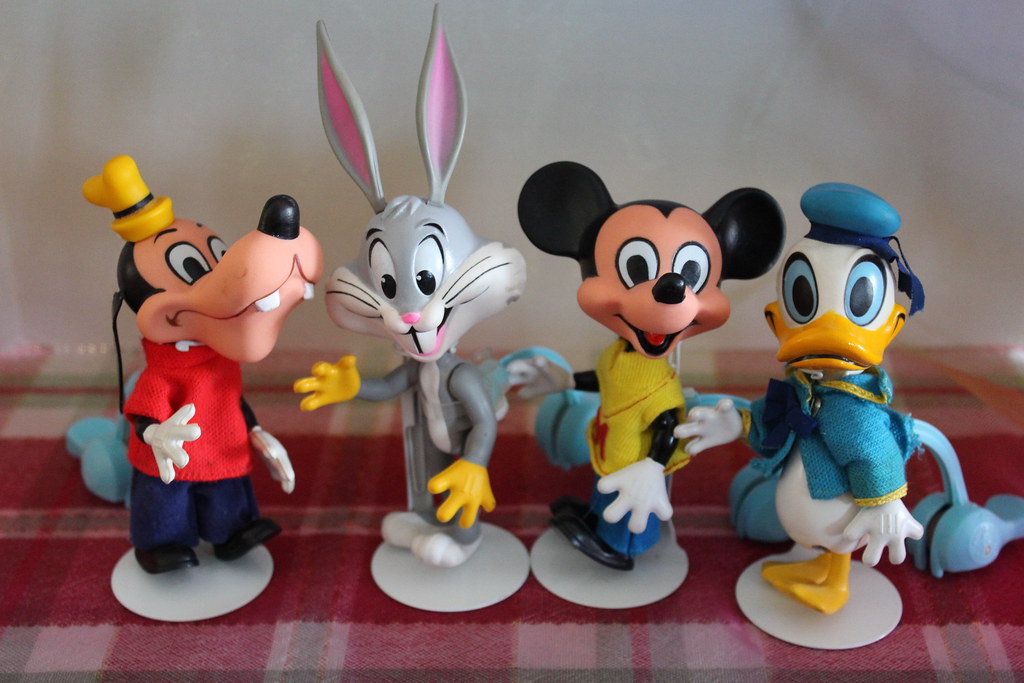 So, that’s a quick look at my Liddle Kiddle Skediddle collection. I think they’re really great representations of popular characters. Even more so, I love the variety! Do you have any of these in you collection? Do you remember seeing them in stores? Have you ever seen or heard about this Daffy Duck Skediddler? Share your thoughts in the comment area!

Reasons Why You Need a Life Coach

P-Square: I Will Never Reunite With Mr. P – Rudeboy