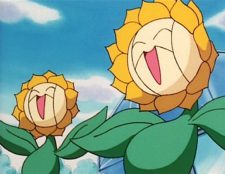 Hello SixPrizes! I’m excited to be back for another article. I hope you all had a happy Halloween. Philadelphia Regionals is only three days away! This may be the largest Regional Championship to date. Orlando had 616 Masters so I can only imagine how many people will be at Philadelphia.

Karen is the one new addition to the Expanded Format that was not at Phoenix. This one card shuts down those pesky Night March and Vespiquen Decks.

Expanded has always had a huge card pool and plenty of viable decks. In Phoenix I actually managed to play against nine different decks in my 14 rounds of play. I also consider all the decks I played against to be extremely viable.

I am going to make a top 10 list of what I would possibly consider playing and expect to see this upcoming weekend, along with a few honorable mentions.

The first deck I want to talk about is the Groudon deck piloted by Stefan Tabaco to top 8 in Phoenix, shown above. Every time there is a Regional in the West Coast it seems like Stefan is finding a way to make Groudon viable. He ran a very unique list with a slim Groudon line and plenty of techs.

The deck does run 4 copies of Korrina as well as 4 Tropical Beach in order to aid you in finding your 2 copies of Groudon-EX quickly. 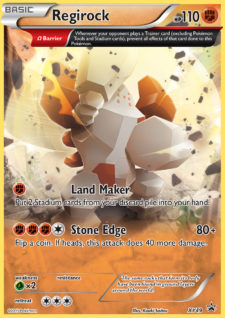 The 2 Regirock are great at getting back Stadiums as well as stalling with Focus Sash attached. They are almost guaranteed to survive two attacks with a Sash and once they go to the Bench they can not get Lysandre’d thanks to their Barrier Trait. They also make great Scramble Switch targets because they can survive two turns.

The Mr. Mime is included to give you a favorable matchup versus Yveltal decks.

The Bunnelby can be used to get back precious resources. In my testing, though, I found that since games last so long and your opponent devotes so many resources to taking Prizes that you can actually just deck your opponent out with Bunnelby.

The Pokémon Center Lady is to ensure our Groudon stay healed on the Bench from the snipe damage of an Yveltal BKT with a Silent Lab.

There is 1 copy each of Escape Rope, Switch, and Float Stone to give us the desired switching effect when needed since they can all be so easily searched out through Korrina.

My favorite inclusion in Stefan’s list is the 1 Hard Charm. Primal Groudon with a Hard Charm is not likely getting one-shotted anyways, and this gives you a way to take less damage. This card also makes all of your Seismitoad matchups even more favorable.

There is 1 Psychic Energy in the deck which may be a bit confusing. It is included because all of Groudon’s attacks take at least a single Colorless Energy so there is a chance that we can attack with Wobbuffet or Mr. Mime if we include a Psychic. But I actually do not like this. I think the odds of you needing to attack with Wobbuffet or Mr. Mime are much less that you needing to use Regirock’s Land Maker attack to get back your Stadiums.

Now let’s talk about some of the deck’s matchups. I do think this deck has strong matchups against Yveltal, Seismitoad, Rainbow Road, Manectric, and Sableye decks, while sporting poor to unfavorable matchups against Trevenant, Vileplume Toolbox, Greninja, Night March, Vespiquen, and Accelgor decks. The deck can be modified to beat Night March and Vespiquen decks with the inclusion of Karen.

This deck does require 4 Tropical Beach to play, making it difficult for the average player to assemble.

I do think this deck was piloted to a better finish than expected which is why it is at our number 10 spot. Overall though I could see this as a strong play for Philadelphia, mainly because of the rise in popularity of Manectric and Rainbow Road decks.

What?!?! Night March? Yes, Night March. Even though Karen is now legal I do not expect it to be run in many decks. I can see some Rainbow Road decks running a copy of Karen, or maybe a few Manectric decks will run it.

I do not think there will be enough Karen being played to make Night March an obsolete deck. It is definitely risky because I do not think there is any way this deck can beat Karen. It is a weird balance because many players think that Night March will see no play, so why play Karen? This may lead many people to remove Karen from their lists. I also only think Karen should be included in your deck as a tech if there is no way for you to beat Night March/Vespiquen.

I do think Night March will be played for Philadelphia by a few people and should not be written off.

Accelgor is in a prime position to make an appearance in the meta. A brief summary of this deck’s strategy is to lock the opponent with Paralysis by continually Deck and Cover’ing every single turn. You can also plan it so that your opponent gets knocked out by Poison damage at the end of their turn and they never get out of the lock. Many decks have cut Keldeo-EX and AZ from their lists giving players very few outs to Paralysis. Giratina decks have become less prominent as well which was one of the deck’s main struggles. Greninja had a phenomenal showing Phoenix which is yet another reason why this deck could shine. 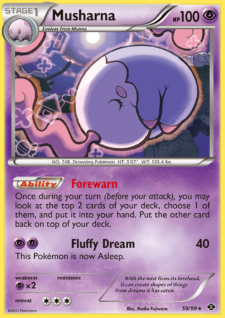 A dreamy inclusion in Accelgor decks.

Let’s go over the list. I chose to include a 1-1 Musharna line for two reasons. Munna’s Ability can allow you to stall in the early turns and set up. Once you have set up you can evolve to Musharna which aids your constant stream of Accelgor.

I would like to say that more decks in Expanded should be running Delinquent. Many decks in Expanded are very Item based and go down to a very small hand size at the end of their turn. Delinquent can punish these players. Delinquent however serves a secondary purpose in this deck. It allows us to discard our Virbank City Gym at will in order to help loop Poison damage. We also run a Xerosic and Silver Bangle in order to help with the Poison loop.

This deck needs to be able to find Pokémon every single turn so we will run out of ways to search for them eventually. Bridgette helps aid in this endeavor since it searches for 3 Pokémon at once and is reusable with VS Seeker.

There is a Pokémon Ranger in the deck because at Phoenix I did see a couple of Darkrai/Giratina decks. They did not run Keldeo, so once you use Pokémon Ranger you and paralyze them they will most likely be forced to miss an attack. If they do run AZ, they will be forced to remove all their Energy from their Giratina and they will not be able to attack with it the same turn.

Accelgor has quite a few things going for it in this meta and I would not be surprised to see a few pop up in Philly.

This is list my friend William Herrmann piloted to a second place finish at Phoenix with one change. After the tournament he told me that he found that he was not using Wobbuffet often and would drop it. I do agree that a single copy of Wobbuffet does not do much. I included a second Jirachi-EX in the deck. Jirachi-EX is just as good as Shaymin-EX in this deck if not better. After you search out your Wally you can still use Jirachi to search our important Supporters such as Team Flare Grunt and Lysandre.

This deck is fairly low on the list even though it just finished second because I think the meta has gotten much worse for it. Manectric is seeing a rise in popularity which is a very poor matchup. Rainbow Road is also seeing a spike in popularity though, and that’s a slightly favorable matchup for Trevenant. Night March may see less play however and that was one of the main reasons to play Trevenant since Trevenant is almost guaranteed a win against it. I would expect to play against Trevenant at least once during the tournament at Philadelphia.

I am using Travis Nunlist’s list for reference with one change: I dropped a Muscle Band for a Xerosic since I expect Manectric/Garbodor to see quite a bit of play. I prefer Travis’ list over Drew’s because I do not think it is a wise decision to have no out at all to Archeops when you are likely to play against at least one. I expect to see much more Greninja at Philadelphia than we saw at Phoenix since it was so dominant. So if you are considering playing Greninja, you may want to include a copy of Pokémon Ranger.

I do not expect this deck to have anywhere near the same results it did in Phoenix. I think people will be more prepared for it and I also think the meta is slightly worse for it. Night March was saw quite a bit of play in Phoenix which is a favorable matchup for Greninja. I think the large amount of Night March played a key role in the success of the deck. I do think Greninja is very strong still and you should expect to play against it one or even more times.