I’m an embroidery geek. (Surprise!) It started many years ago when my mom, whom I was working for at the time, announced to me that a few days hence we were running an embroidery class. And I was teaching it. Gulp! For me, the embroidery ‘thing’ just escalated from there.

That was back in the days when domestic embroidery machines were just becoming available, when a 4″ x 4″ embroidery area and a glorified calculator-screen were state-of-the-art technology. Do you remember those days? 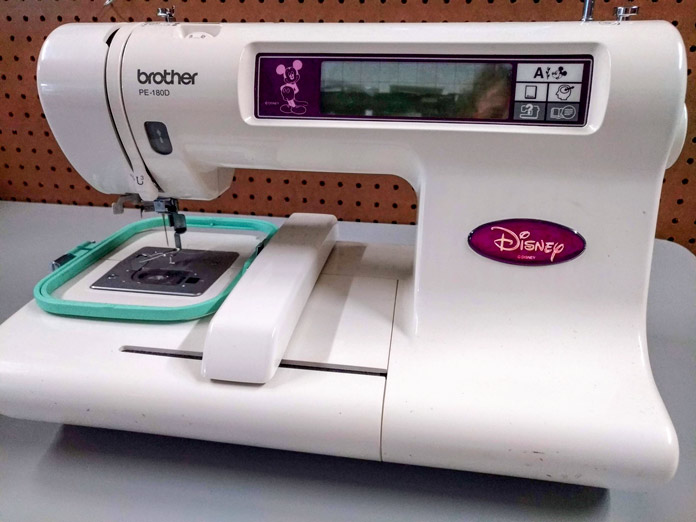 One of the first Brother home embroidery models… and still going strong!

We’ve come a long, long way since then, Baby! This fact is demonstrated so emphatically with the high-tech features I’ve been playing with over the last few days, and no less so with the toy for today: the Quilting Border Patterns built-in to the Brother Luminaire Innov-is XP1. Since this isn’t a feature I’ve put to frequent use, I needed a reminder of the process. I was delighted to find, also built right into the Luminaire, a video outlining the steps. It’s like having your own personal tutor!

Let’s dive right in so I can show what the video showed me. Of course, I’ll put my own twist on it, because I’m still trying to coordinate this with yesterday’s sew-out. Kinda suitable, because I discovered the Quilt Border Patterns share the exact same connection process as yesterday’s Pattern Connection By Camera. Where it differs is the setup – a wizard guides the process, making all the calculations for me! Gotta love it!

After selecting the Quilt Border Patterns category, I Set the pattern I liked and was immediately launched into the layout wizard. Pretty self-explanatory; I was asked for my outside dimensions and the desired pattern size. 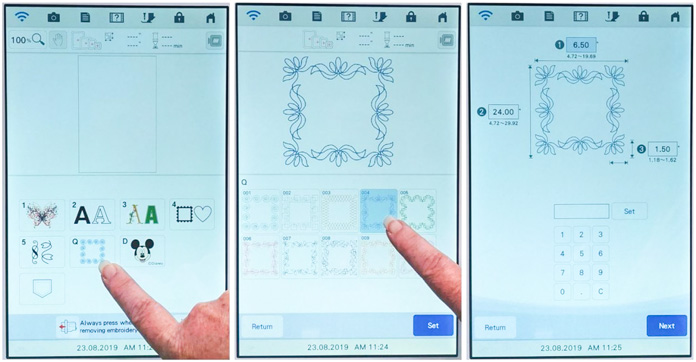 As with yesterday, there’s a lot of button-pushing, but not a lot of real effort. As you can see in the pics below, the next few screens show the layout (this setup asks for two hoopings) and has me save the layout to the machine, and then retrieve the master connected design (the one with the connection icon). 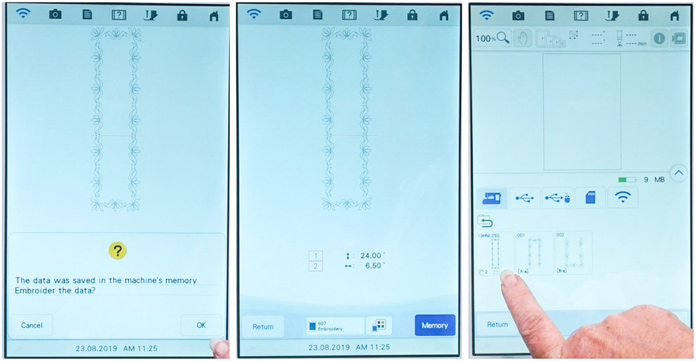 The layout is calculated, saved, and retrieved for use.

From here on in, it’s super easy. The first segment of the pattern loads up, and I can scan the hoop contents to get it placed perfectly. Stitch it out and, if you were with me yesterday, you’ll see a familiar sequence: the steps are all pretty much the same ones I did for Pattern Connection by Camera, except the appropriate ‘next pattern’ loads up automatically. The snowmen are projected onto the fabric, scanned, and recognized before being asked to re-hoop.

I followed through the sequence as prompted by the Luminaire, and I’ll admit, I had my doubts; quilt borders are traditionally only a single line of stitching that has to match up perfectly, if it didn’t, in my mind, it would be a glaring error. But… look at this close up of where the very last stitch joined the very first stitch: 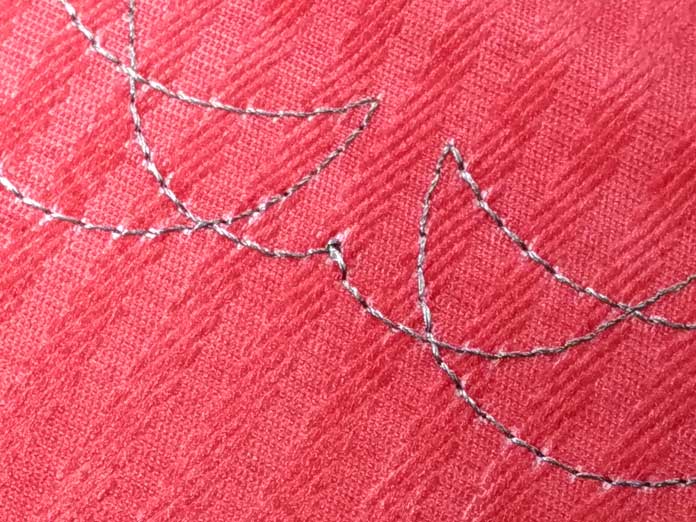 An impressive match-up! A stitch-perfect join!

And guess what? This worked out so well it’s a shoe-in for what I was hoping to do! I trimmed yesterday’s panel to 8″ wide, and today’s panel to 2″ wider (that’s the key: 2″ wider than the other). I then matched raw edges and seamed them right-sides together with a ½” seam. Yes, the back side was bigger than the front – but you know me by now – method and madness, right? 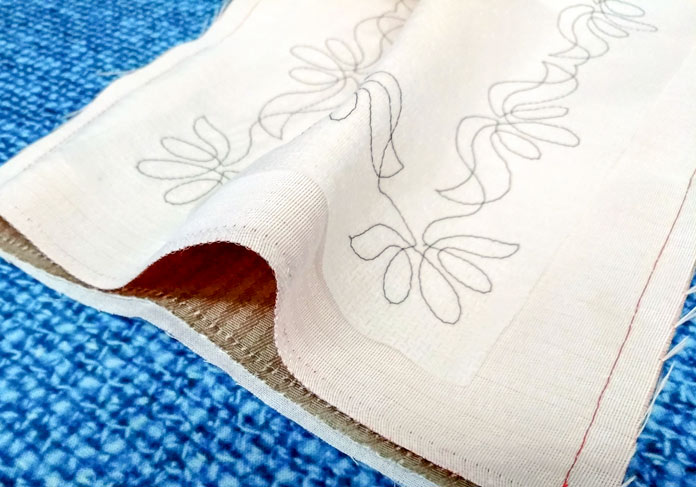 Both pieces seamed together with raw edges matched.

Turned right-side out, pressed and voilà! A reversible panel…

I love this method of pairing two fabrics (one 2″ wider – remember, that’s the key here) to create a self-bound panel. You can see one side is bold and beautiful and colorful, while the other is more subtle. 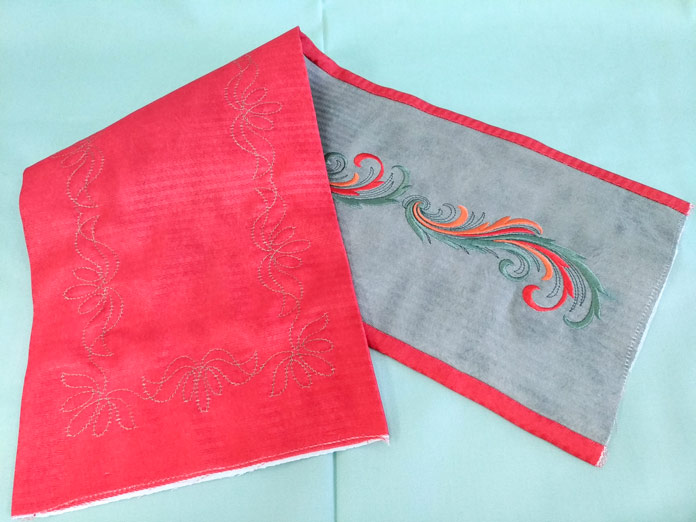 Turned, it’s now pressed and perfect. But not quite done…

I’m joining the ends for this and stitch this panel into a round. That round is destined to become a reversible pillow-wrap to spiff up a plain throw pillow. It’s shown here in all autumn tones, but can you envision it on a coordinating sage-green pillow, or perhaps a creamy faux suede? Oh, the possibilities! 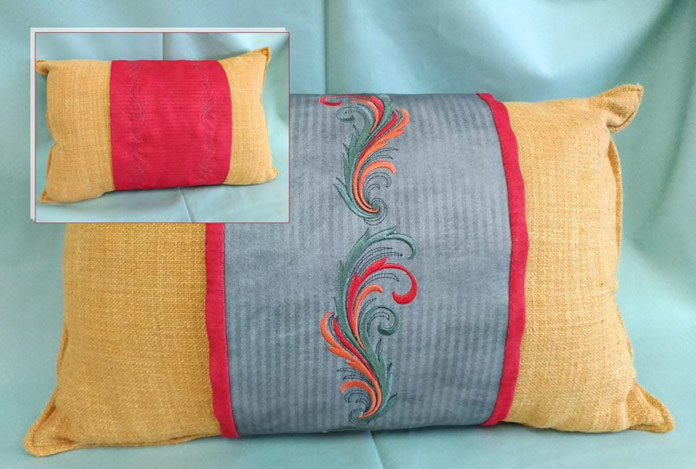 Two sides of the same project…

I hope you’ve enjoyed these starter-level applications of the camera functions on the Brother Luminaire – and you’ve learned as much as I have. I find every time I take on a new project (and oftentimes when I repeat a same-old, same-old project) I learn something new.

Now… I started off today’s blog by stating I am an embroidery geek. And I am… I love embroidery – but I really love the software. Which means I don’t play a ton with My Design Center on the Luminaire. So… remember how my Mom got me started with embroidery? This time I’ll do it to myself – what better way to learn My Design Center than to have to talk about it? I have been asked to return next month, and I plan to learn all about My Design Center. I hope you’ll join me!

This is part 5 of 5 in this series.
Go back to part 4: Pattern Connection By Camera on the Brother Luminaire

With GiftstoIndia24x7.com, this Raksh…
Massacre on Queens Blvd. ’96
Moffat Camping and Caravanning Club S…
How to Grow Your Online Business by O…
Wuhan Weather Report

The post Playing with the Quilting Border Patterns in the Brother Luminaire appeared first on QUILTsocial.