Welcome, back, everyone – looks like this is getting to be a habit, LOL. I’m just having so much fun playing with the toys tucked into the Brother Luminaire Innov-is XP1, and I’m so glad you could join me again. Yesterday I played with Auto-Stippling on the Luminaire, and today’s playground will introduce yet another toy – one I intend to apply in a bit of a non-traditional use.

Ready to dive in and play? I hope so – because I’ve a fantastic little project I want to show off – a personalized key fob using the Appliqué Creator.

This project is totally inspired by a Brother Blog post by Cindy Hogan, where she leads you through the steps to create a more sophisticated variation on the Brother BES 4 Dream Edition Lettering Software. Cindy is a Brother Software expert and the author of several excellent Brother PE Design and BES software workbooks.

The premise for this project is simple (I wish I’d been the one to think of it first!): Enter a name, add in a placeholder to become the ring tab, and then create an offset, contoured line around it all. Delete the placeholder, and I’m ready to Stitch, where I’ll use the stitch navigation tools to stitch some pieces and skip others. Here, follow along:

Building on stuff already played with over the last few days, first select a font and enter a name; Set it. Next I chose an upper-case “I” from the plain block font, Set it and sized it taller – as much as it would go. Only taller, though, not wider. I rotated it 90°, and moved it into place just before the first initial. 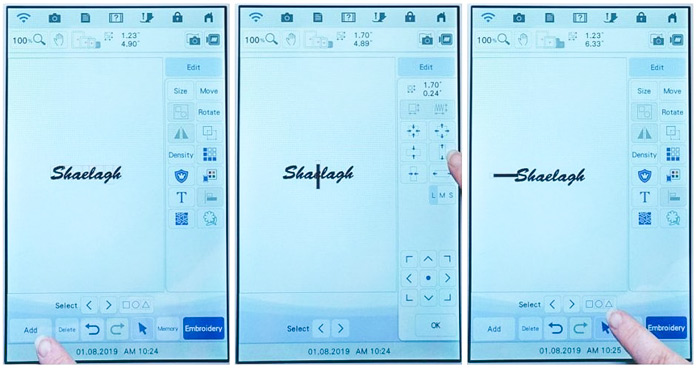 Shown here are the building blocks for this quickie project – a name and a bar.

Next, I touched the Select button, and then Select All in the selection screen. After hitting OK, I grouped the elements and the Appliqué Creator button un-greyed itself. 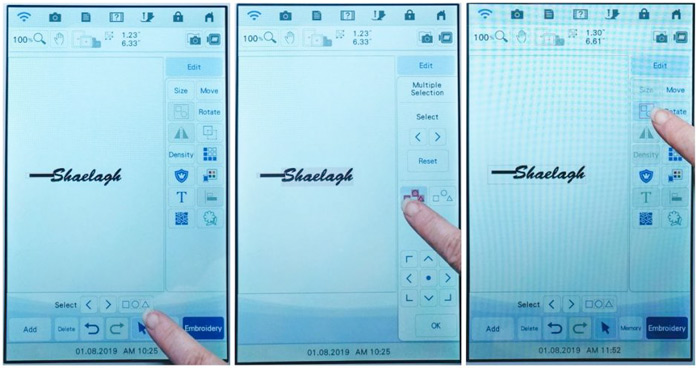 Select all the elements and group them to unlock access to the Appliqué Creator tool.

Touch the Appliqué Creator button to open its setting screen and whoa! Quick as a blink, all the necessary stitch layers for appliqué have been created! And for those of you who have a Brother ScanNCut that reads PES files, you’ll be thrilled to know the appliqué design created here is compatible with the ScanNCut. I won’t be using that for this project, but it’s something for you to explore.

To complete the design for this project, however, all you need to do now is choose the distance you want your stitching from your name, and then touch OK. 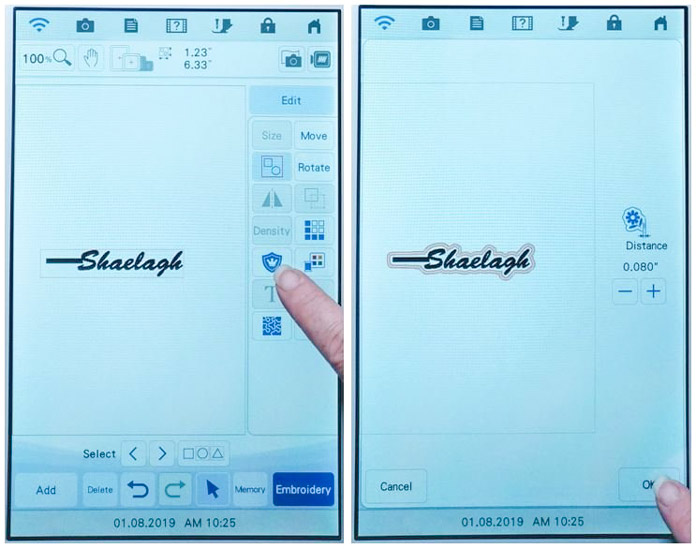 The Appliqué Creator tool automatically sets Appliqué Material, Placement, and Cover steps with the touch of a button.

Now, since I don’t want the placeholder bar to stitch, I’ll simply Ungroup, touch the Select arrow at the bottom of the screen to grab and Delete the bar. Ta dah! The design is ready to stitch – I guess I’d better catch up! 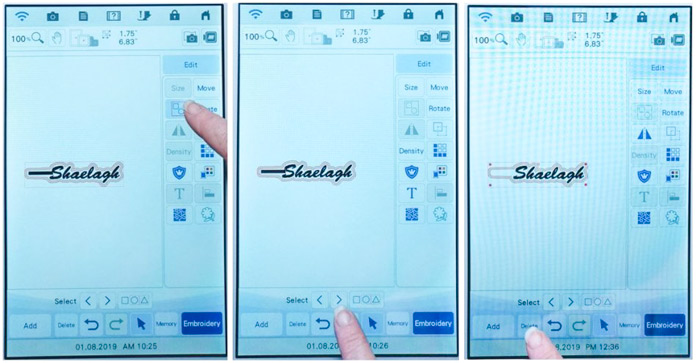 I hooped black tear-away, and cut two strips of black Kraft–Tex large enough to fit my design with a generous border for handling. I interfaced one piece to prevent my satin stitch from completely perforating out my design (this will be the top piece), and threaded up my machine with embroidery thread on top and bobbinfill in the bobbin. I’ll switch out the bobbinfill later for the same color as the top thread for the reversibility part of the project. I centered the top piece of Kraft-Tex under my design, and stitched the first part, the name, on it: 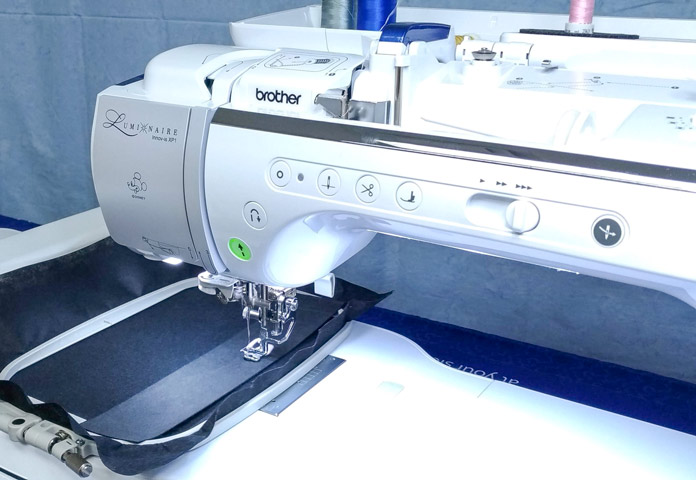 With Kraft-Tex on top of my tear-away, it’s time to start stitching.

When the name is complete, I’ll tape the second piece of Kraft-Tex to the back, lined up with the top piece. Again, I like the tear-away tape from OESD for this. Before putting the hoop back on the machine, I’ll switch out the bobbin for pink thread. I also chose to turn off the trimmers again, like yesterday. 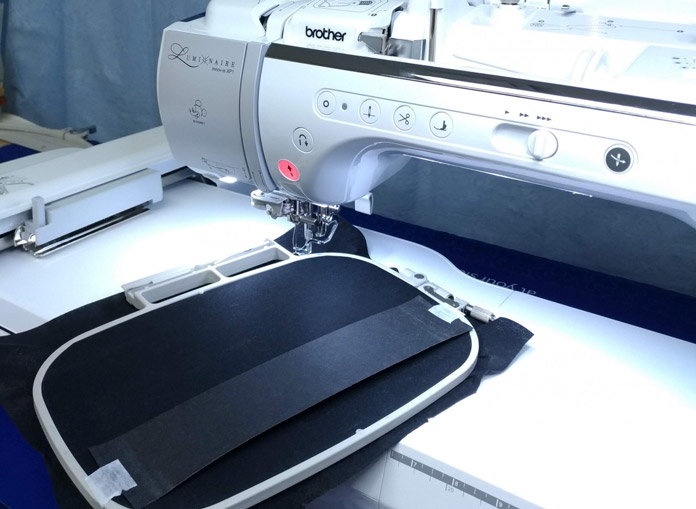 Here’s the second piece of Kraft-Tex, taped to hide the back of the embroidery.

I’ll stitch the next color step in the sequence… three times. Yep – you read that right. Once isn’t enough oomph, and I really don’t want the next color steps (the offset placement and the cover stitch) to stitch at all, so when the Appliqué Material step is don’t, I’ll use the stitch navigation tools (the same ones I use when I break a thread), to back up and stitch that same bit again. And again. Three times is the charm for the look I want. I’ll skip the last two colors completely.

Now it’s done stitching, I’ll remove it from the hoop and cut it out, fairly close to the boundary stitch, leaving about a ⅛” border. Attach a snap – I used the Babyville snap tool for this, and then snapped it closed around a D-ring and key ring for the look I envision. What do you think? Isn’t this a cool project? 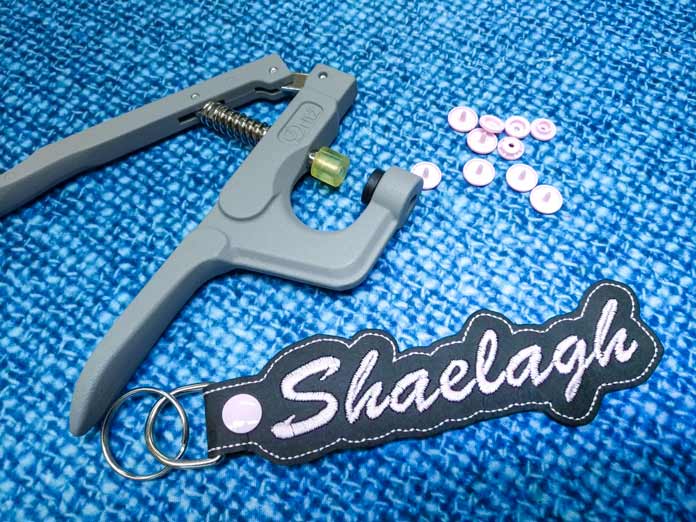 A perfect gift for someone who can never find their name pre-printed on personalized items!

I have a confession for you… that’s not all I wanted to show you today. While there may be a method to my madness, as I mentioned the other day, there’s also often a hefty dose of madness in my methods, notably… I tend to be overly optimistic about what I can accomplish in a given amount of time (or number of words, as it happens). I had grandiose ideas of showing you another really nifty tool tucked into this magnificent machine, but it looks like it may have to wait for next time. And there will be a next time – I’ll be back next month to play with some more goodies on the Brother Luminaire, in particular some of the exciting advantages the built-in camera offers. Until then, happy sewing!

This is part 5 of 5 in this series.
Go back to part 4: Create stippling-in-the-hoop with the Brother Luminaire

With GiftstoIndia24x7.com, this Raksh…
How Mail Protocols Work
Portuguese Arraiolos Rugs
Our lives’ are all about making choic…
Give the gift of health and fitness t…

The post Making your own appliques on the Brother Luminaire appeared first on QUILTsocial.