Yesterday and Monday on QUILTsocial I added the second side to all of our double wedding ring blocks and today is the day that the quilt top will FINALLY be pieced together!

There’s been a lot of sewing involved in these blocks and I’m very happy to have been able to piece these using the Brother Dreamweaver XE! 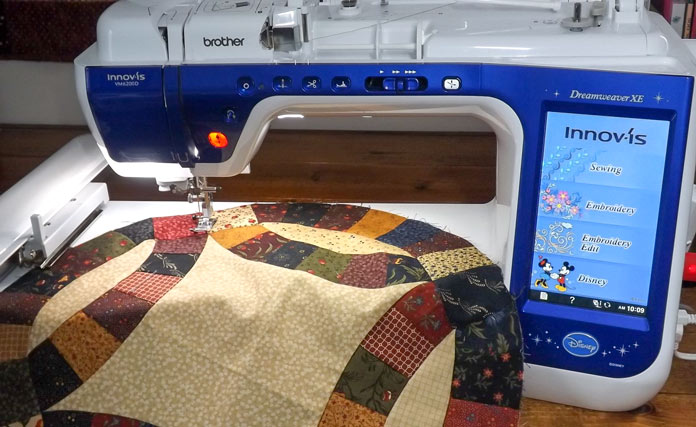 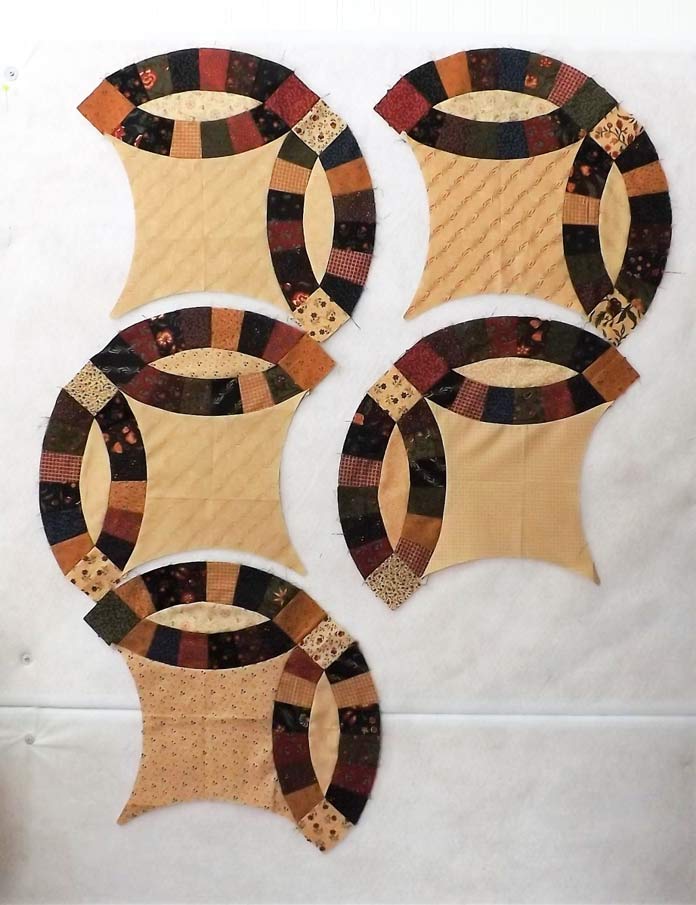 Now we can sew the remaining two sides to one of our blocks. This will become the bottom block on the right side of the quilt and is the only block that has all four arcs sewn to it before it is sewn to the other blocks. No matter what size quilt you’re making or how many blocks it has – only one block is completely sewn with all four sides before joining them all together. 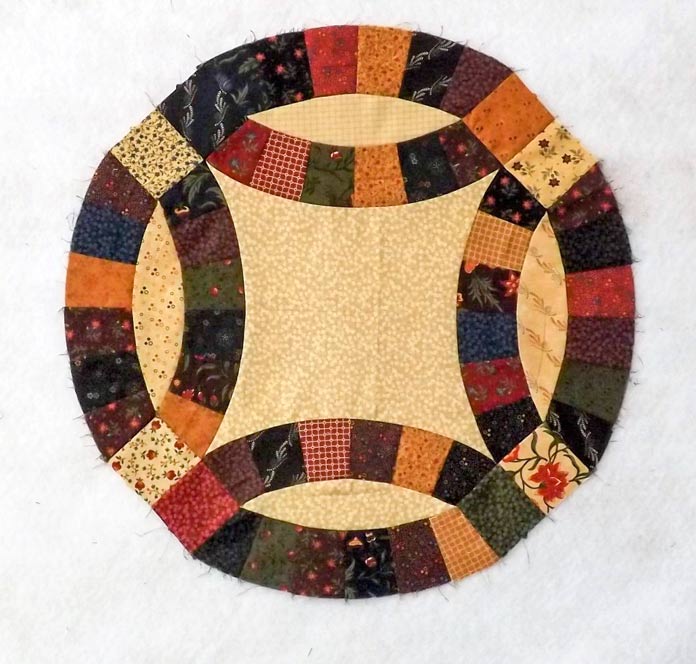 Now that the blocks are all arranged, and the complete block (with all four sides sewn to it) is placed at the bottom right of the quilt, start sewing a third arc section to each of the block centers located at the edges of the quilt. If my bed runner had three blocks in each row, the center blocks would not have a third side sewn to them at this time.

As you can see below, that third section is sewn to only one of the blocks in each row. 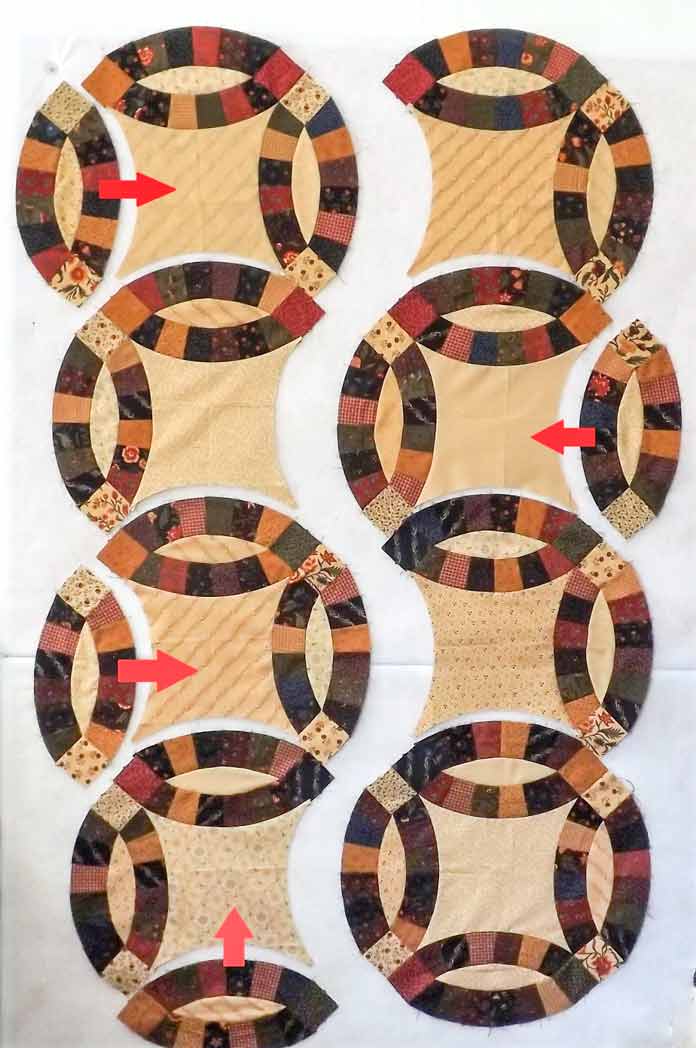 Sew the blocks into vertical columns. Notice that the seam that will be sewn to join these two columns together will be one gently curving seam.

See why I say ‘this is the absolute easiest way to assemble a Double Wedding ring quilt’? If you put the blocks together in any other way, you have to deal with set-in seams – but not with this method!

Next, sew the columns together with one long seam that goes from top to bottom in a gentle curve. Make sure to match up the center of each four patch and the block centers with the pieced arc centers the same way as the individual blocks were pieced.

Sewing the rows together

Here is my bed runner quilt top, which I pieced together entirely with the Brother Dreamweaver XE. 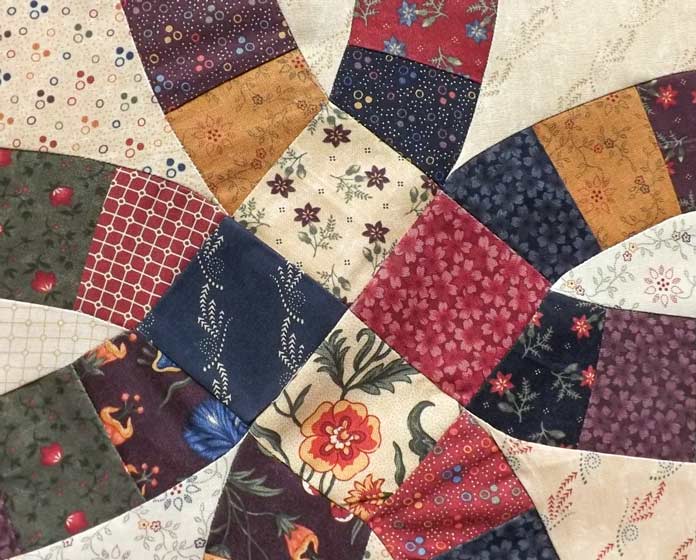 The one problem with using a die cutting machine for cutting quilt pieces is that it’s almost too easy! I often end up cutting way more pieces than I actually need for my project and this bed runner was no exception. There were enough pieces left over to make a matching four block table topper with the same fabrics.

Now that my quilt tops are assembled, I’m all ready to start quilting!

The Dreamweaver XE has an amazing dual feed foot so I’ll use it to machine quilt my table topper with some gentle curves and straight lines – see you tomorrow!

This is part 3 of 5 in this series.
Go back to part 2: Taking the fear out of piecing Double Wedding Ring blocks