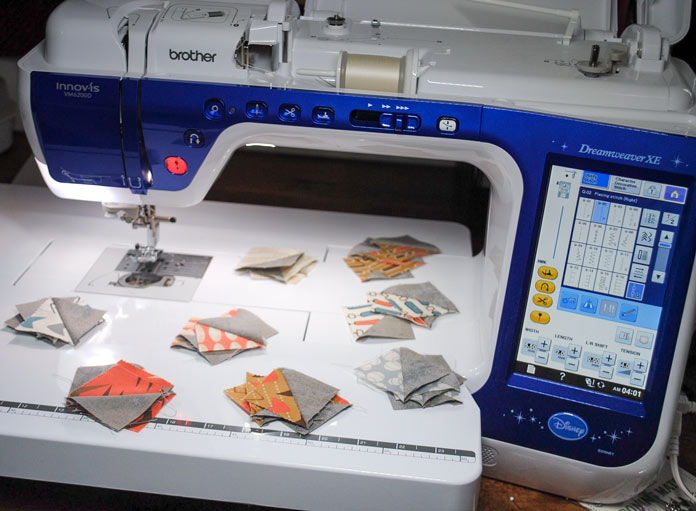 Make the top of your rice pack and cut your backing fabric the exact same size. Here’s the top that we made yesterday with our HST units. 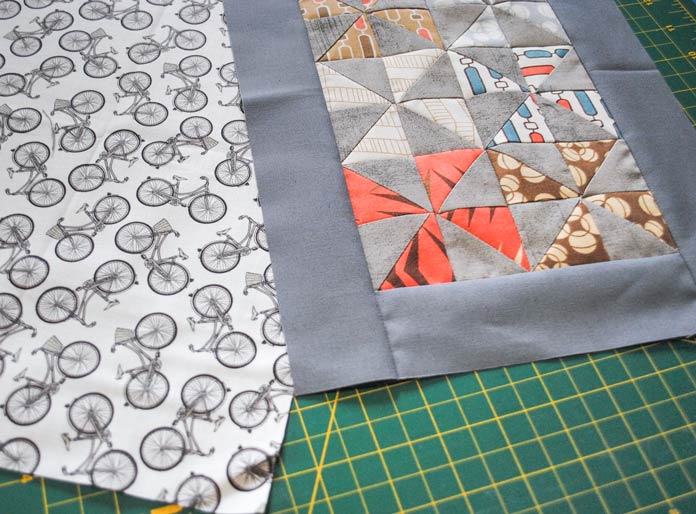 The top and backing

Pin the top and backing together. I’ve used clips to clip the top and back together and to mark the center of each pinwheel block along the top of the bag. You’ll see why in a few minutes. 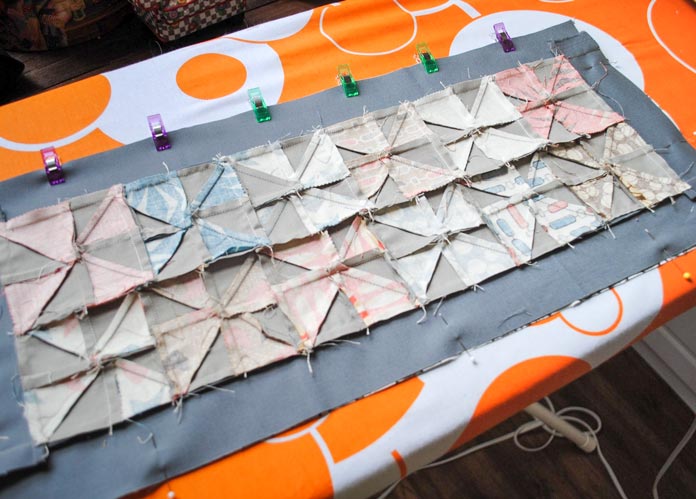 Pin the layers together.

Sew the top and back together with a ⅜” seam. The center stitch “Q-01” on the Dreamweaver XEwhen used with the “J” presser foot results in a ⅜” seam. 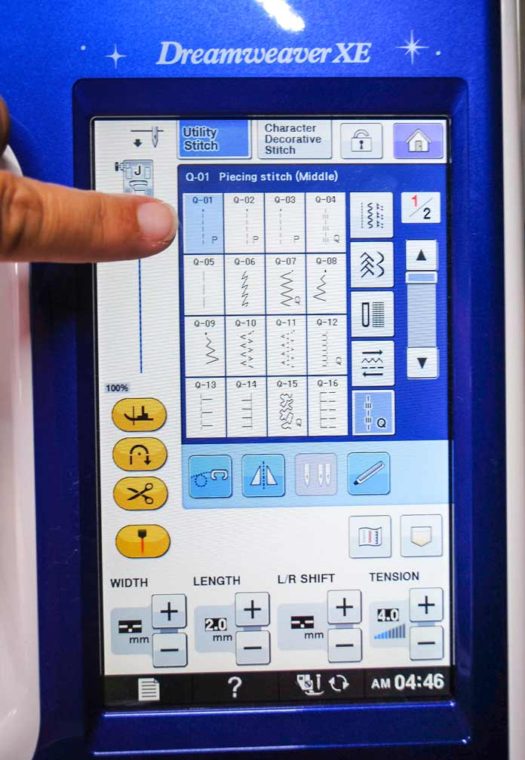 Sew the edges together, leaving spots unstitched as shown in the following photos. 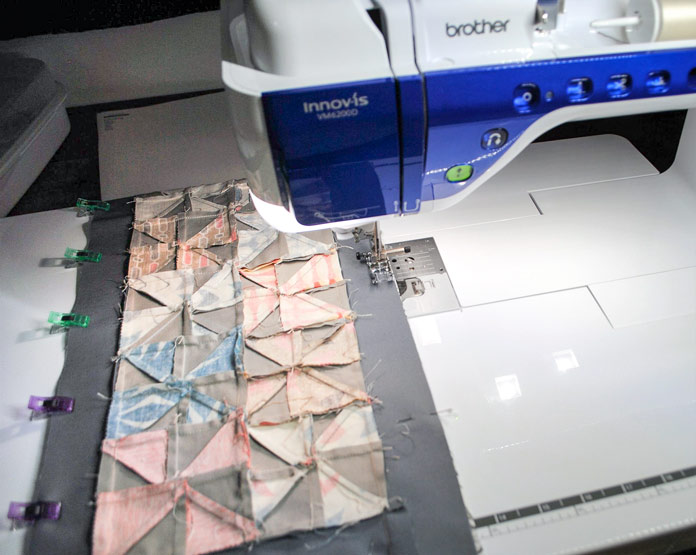 I left a small section unstitched where each of the clips was positioned. I’ve done this to create channels in the pack so that the rice is evenly distributed throughout. I’ll be able to use the funnel in each of these holes when filling the pack with rice.

Also leave a large opening unstitched at one end of the pack to allow for turning it right side out. 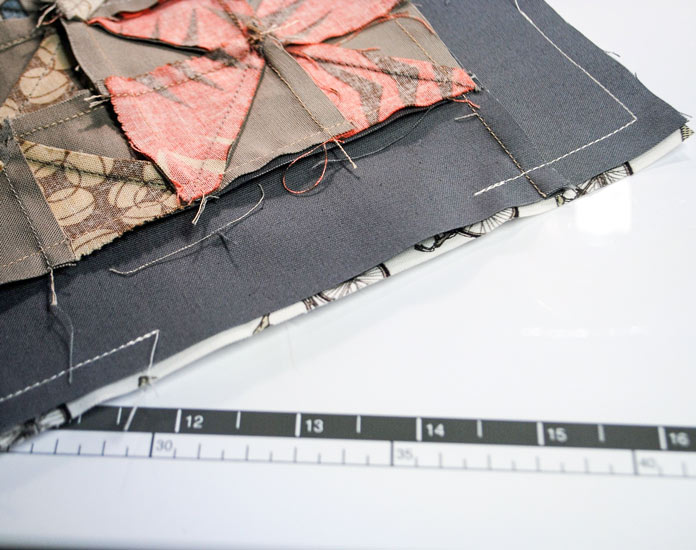 Once stitched all the way around, the Hot Pack is turned right side out and then the side seams are pressed with a hot iron. 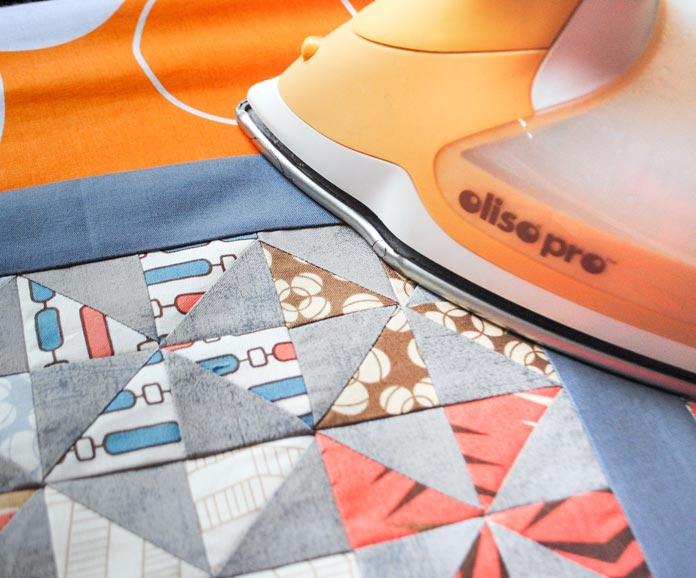 The sides and bottom of the hot pack are topstitched ¼” from the edge using the “J” foot on the Dreamweaver XE from Brother. This will close the opening that was left for turning. Don’t topstitch the top of the pack yet as we want to leave the small openings open for filling. 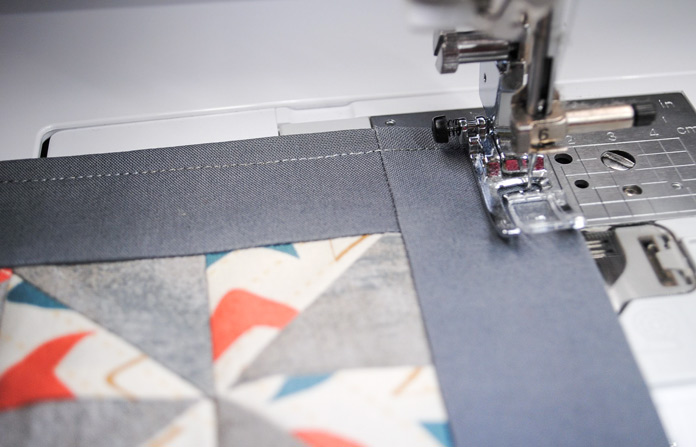 Topstitching the sides and bottom edge

Stitch in the ditch between the pinwheel blocks to make channels for the rice. I’m using the guideline marker (laser pointer) on the Dreamweaver XE to help. It’s activated by pressing the button on the LCD screen. 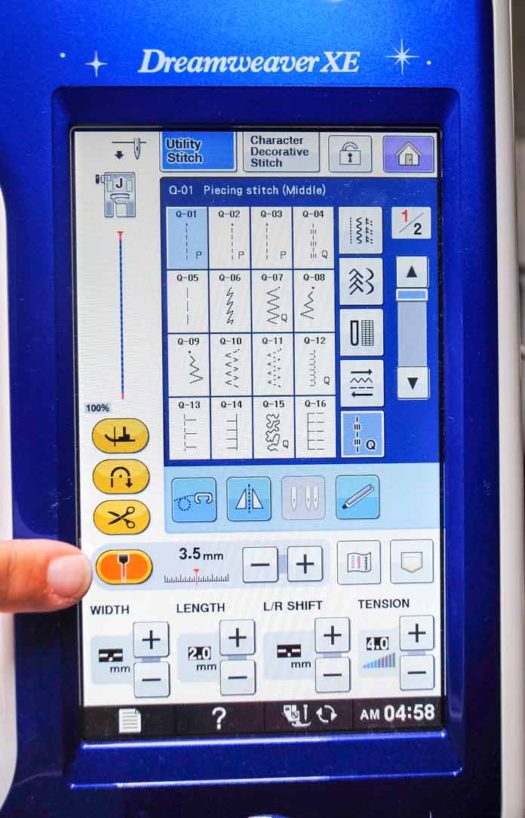 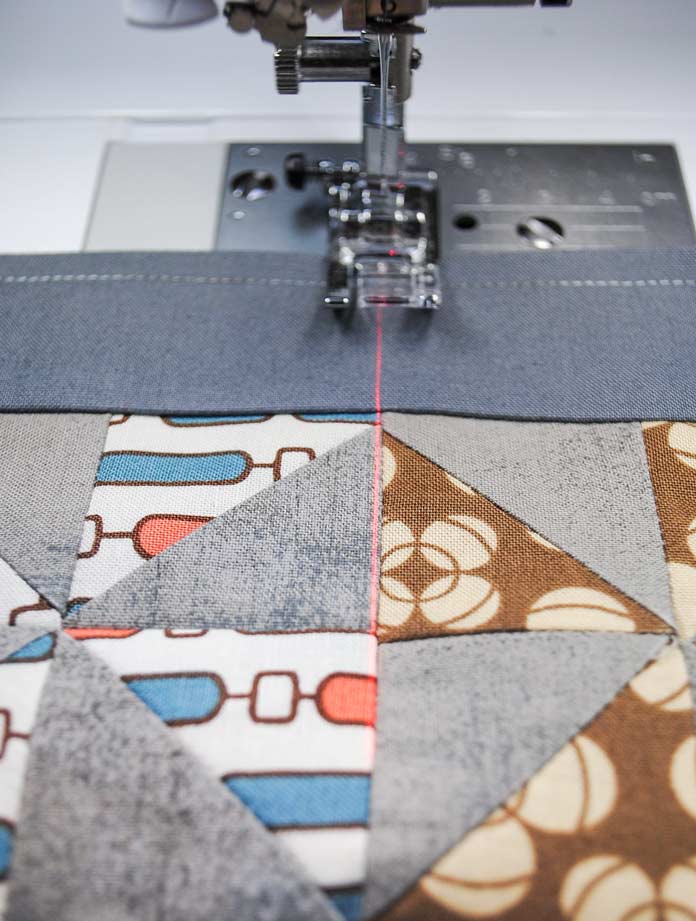 The hot pack is all stitched and ready to be filled with rice. 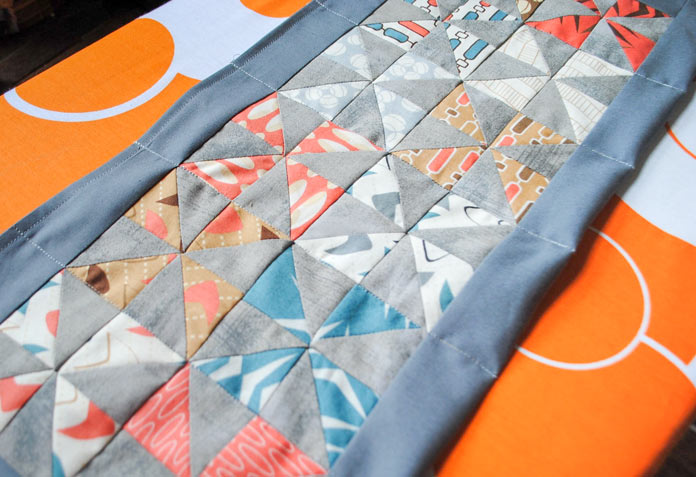 Ready to be filled 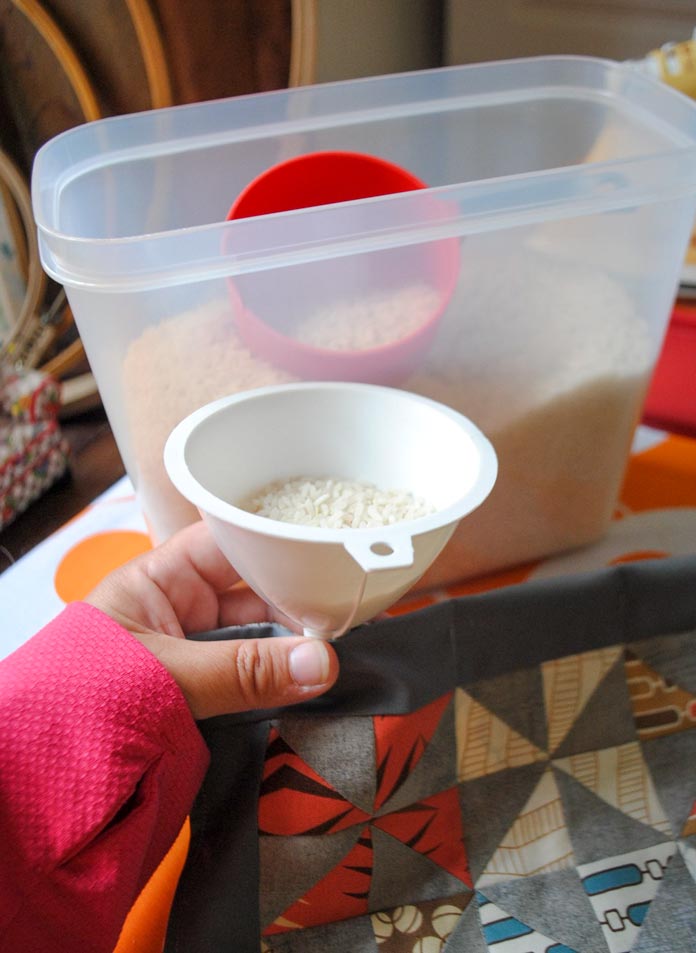 I filled each channel of the hot pack with the rice and then folded over the excess fabric to make sure that the level was even in each one. I went back and put more rice in the ones that didn’t seem quite as full. 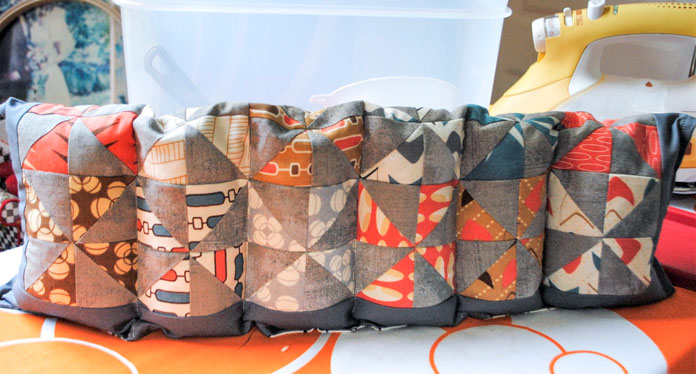 Next, I clip or pin each hole closed to prevent the rice from spilling out into your sewing machine. Believe me – I learned this the hard way! 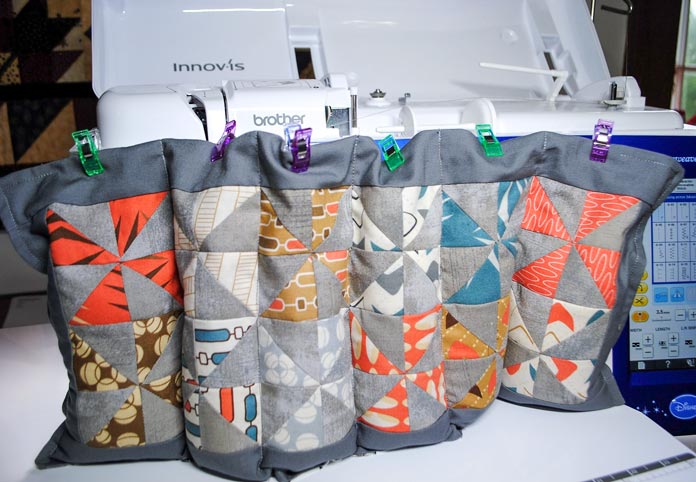 The last step is to topstitch the top edge of the hot pack with a ⅜” seam in order to close all of the channel openings. 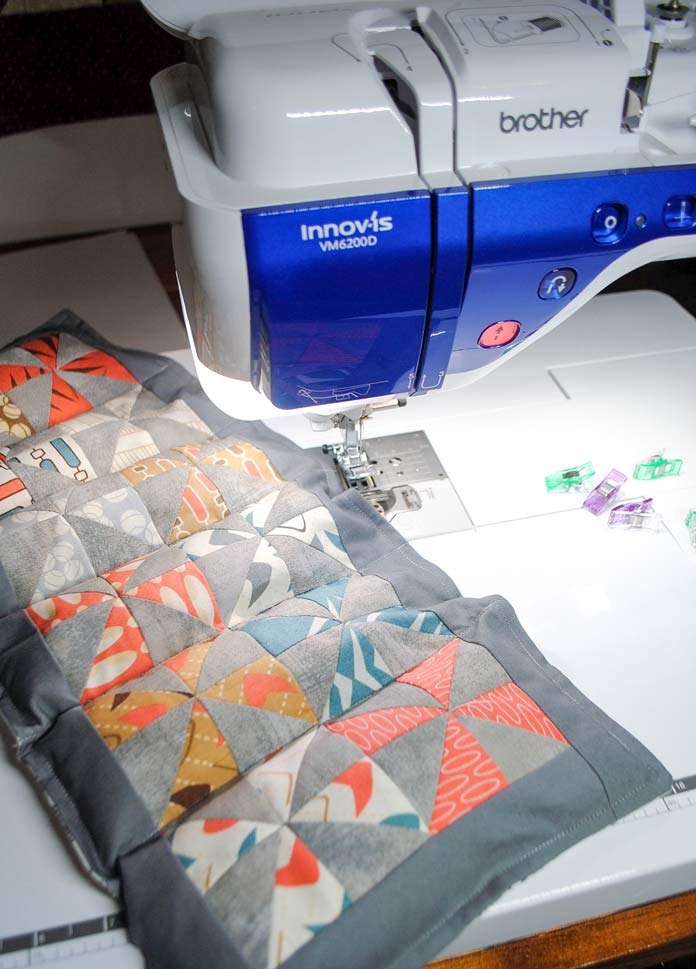 For added security, add a second row of topstitching in between the edge and the first row of stitching. 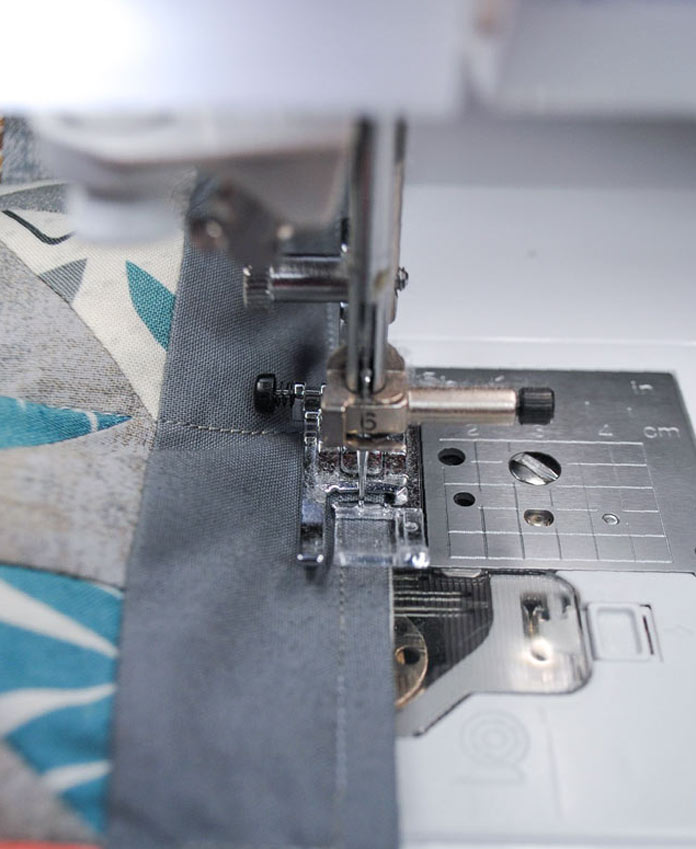 A second row of topstitching

Here’s my finished hot pack, sewn using the Dreamweaver XE from Brother. The only problem is that it looks almost too nice to use!! 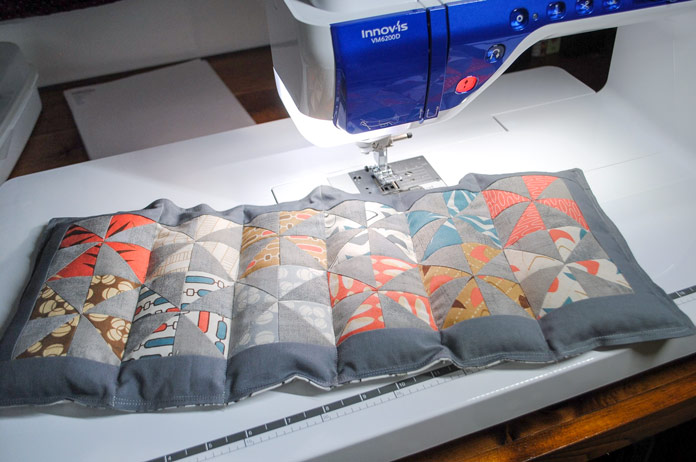 So there you have it – 8 easy steps to make a microwavable rice pack. I hope you’ve enjoyed making the three easy gifts I showed you this week and that maybe you’ll think of more inventive ways to use your leftover half square triangles!

I’m having so much fun with the Dreamweaver XE from Brother – it really makes sewing and quilting a dream! Who knows what we’ll use it for next month! See you then.

This is part 5 of 5 in this series.
Go back to part 4: Making a hot pack out of pinwheel blocks