7 tips to speed up the quilting process

Welcome back! How’s the sewing marathon? It’s amazing how much work you can get done when you have sewing space to work in and the tools are set out.

One of the things I’ve discovered and I’m guilty of from time to time is that we don’t allow ourselves time to play around. We want to dive right in. But until you’ve got a good understanding of the sewing/quilting processes, it’s very difficult to move to the next level.

Today, I’m focusing on some very simple quilting techniques on a set of placemats. There’s a lot of good information here so have a look. I’m sure you’ll learn a tip or two. 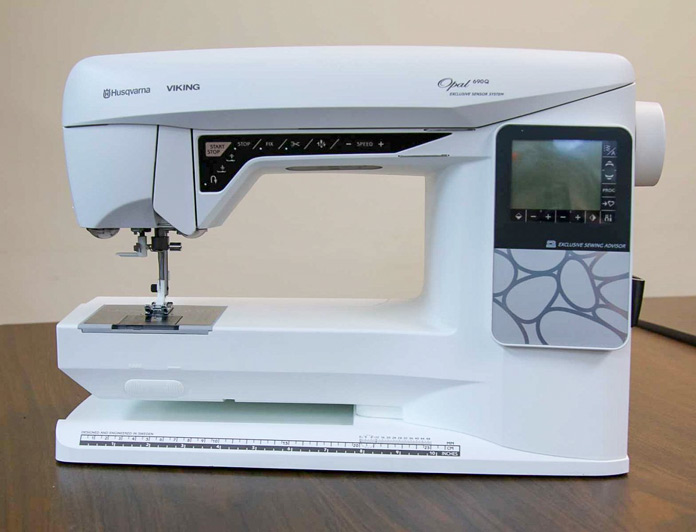 It doesn’t matter how small the item you’re quilting is, you should use the Dual Feed Foot for the straight line quilting. It works in conjunction with the feed teeth and enables all layers of the project to move together as one unit. This helps to prevent stretching.

Make sure the foot is attached properly to the sewing machine. See that plastic U shaped piece at the top? Make sure that fits around the screw that holds the Needle in place. Otherwise – well, what you get won’t be pretty. 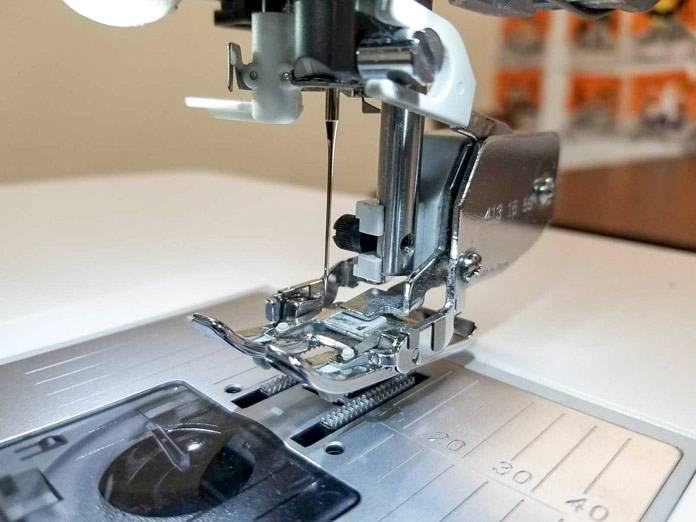 The Dual Feed Foot properly attached to the sewing machine

I’m allowing the Exclusive Sewing Advisor on the Opal 690Q dictate the stitch length and the tension. Because I’m quilting through three layers with a fairly dense batting and using a heavier Thread, I’ve chosen Woven Heavy as my setting. 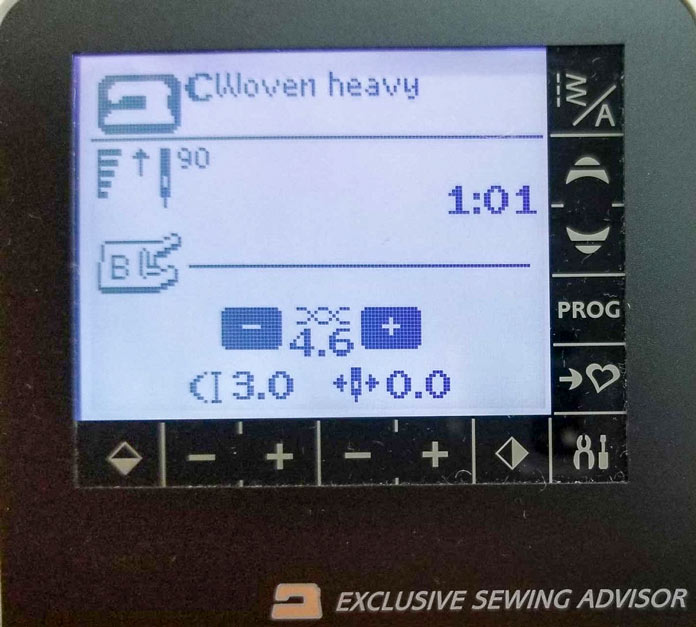 More often than not, I choose thread based on what I find in my thread stash. And color is the first indicator of why it gets chosen. This time, I found a 50 weight piecing thread that I’ll use in the bobbin and I found a 40 weight quilting thread for the top.

You don’t need to use the same weight of thread in the top and bobbin. But you should check that you’re getting a good tension when using the two different thread weights.

I have a little bit of stitch in the ditch to do and that 40 weight thread isn’t the best choice, but these are placemats. I’m not going to worry if the thread shows a little bit.

The top and bobbin threads selected to quilt the placemat

It looks like the person from whom I inherited these placemats would have stitched right down that light sashing with black thread. Yikes – that will certainly call attention to the thread (black – very stark contrast).

I wanted something much more subtle which is why I chose a thread that matches the cream background. These are placemats, they do not need a lot of quilting. I’ll be stitching around each of the little panels and in the ditch between the outer border and the center panel. 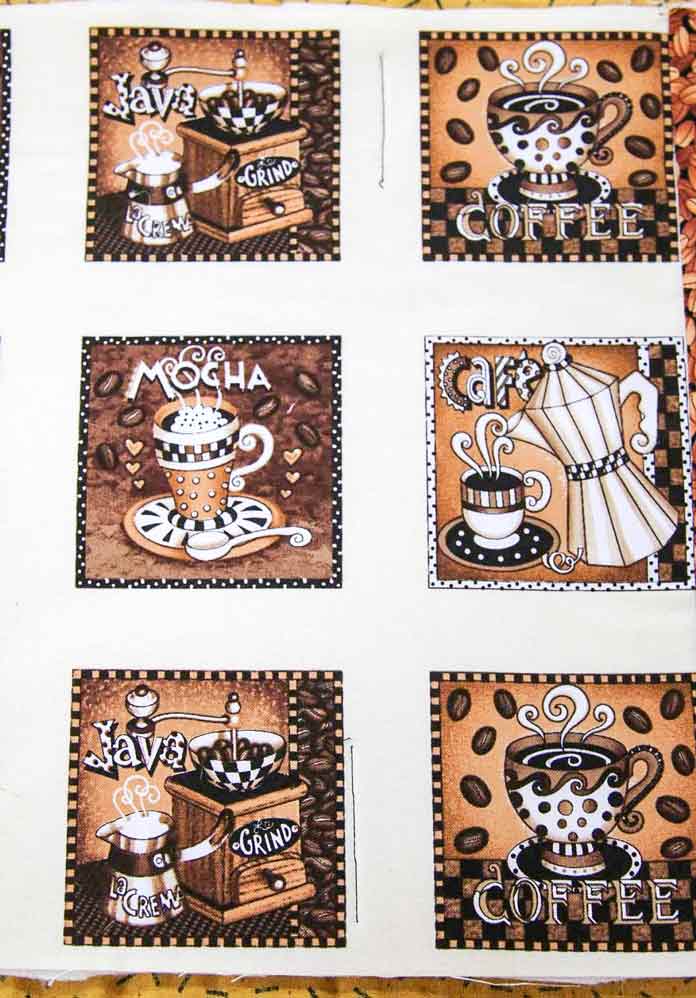 Black thread is very stark against that cream background

Whenever you’re having difficulty with thread breakage and shredding, it’s almost always the needle/thread combination is incorrect. This is something that most people don’t realize and will often blame their sewing machine for the problems. Needles come in different styles and sizes to accommodate different weights and types of thread.

Have a look at the stitching below. Do you see something that’s not right? 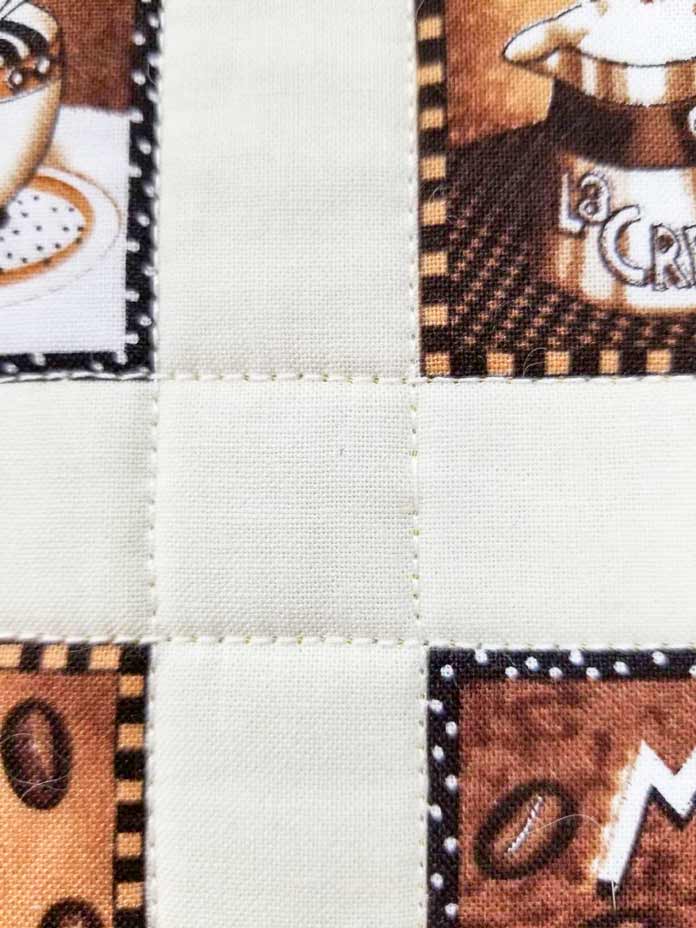 While most of the stitches are beautifully formed, there are a couple of skipped stitches.

Do you see the skipped stitches? That’s not very attractive on your finished piece. The thread also broke within the first line or two of stitching.

What happened? I tried to fit that 40 weight 3 ply thread through a size 10 needle. Yes – I was lazy but I also wanted to see what would happen so I could take a picture for you.

This is a very important lesson. You MUST absolutely match the needle to the thread. If you’re not certain, try some experiments. If something isn’t working, try a different combination. Just remember – thicker threads – use a bigger needle. The shaft is larger as well as the eye to accommodate the thicker threads. 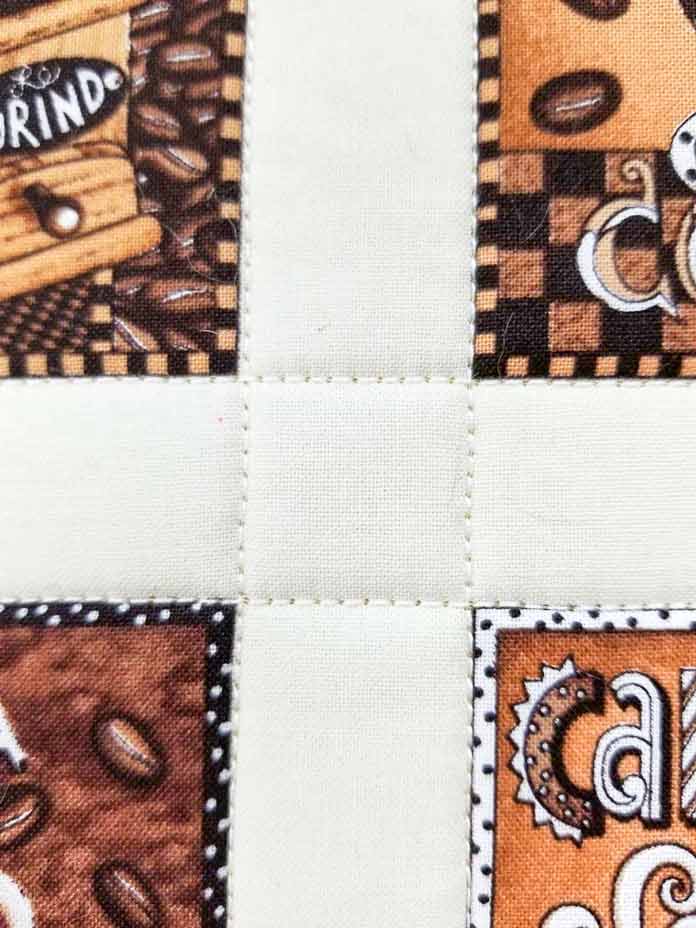 If you take nothing else from today, this is critical to having your work look amazing and it’ll lessen your frustration with machine quilting.

If you’re interested in making my little needle holder (this is for partially used needles), check out my post, Making a sewing machine needlecase using the Sapphire 965Q embroidery feature, for the free pattern and instructions.

I inherited these placemats from someone. They were already basted with basting spray. But over the years that they’ve sat in my studio, they were folded and there was a big wrinkle on the back.

The items are so small, that it doesn’t make sense to baste them in any of the traditional ways, even spray. For small items, I like to use the iron to press the three layers together. I press from the front and then I press from the back.

If you need to throw in a couple of pins for security, by all means, do that.

I would not baste anything until I was ready to quilt it. The backing can “stretch” when it’s folded before it’s quilted and things get wrinkled. I prefer to baste and then go right to the sewing machine.

Did you notice that I’m working with something very small? There’s no sense in starting a huge project when you’re learning or even trying a new technique. Do small things, get used to machine quilting and moving the quilt under the needle. Try different threads. If you practice on small things, it’ll be a snap when you get to a larger quilt.

I can’t stress this enough. I’ve seen way too many people come to a machine quilting class with the intention of working on a king-sized quilt when they get home. They’re setting themselves up for failure before they even start. 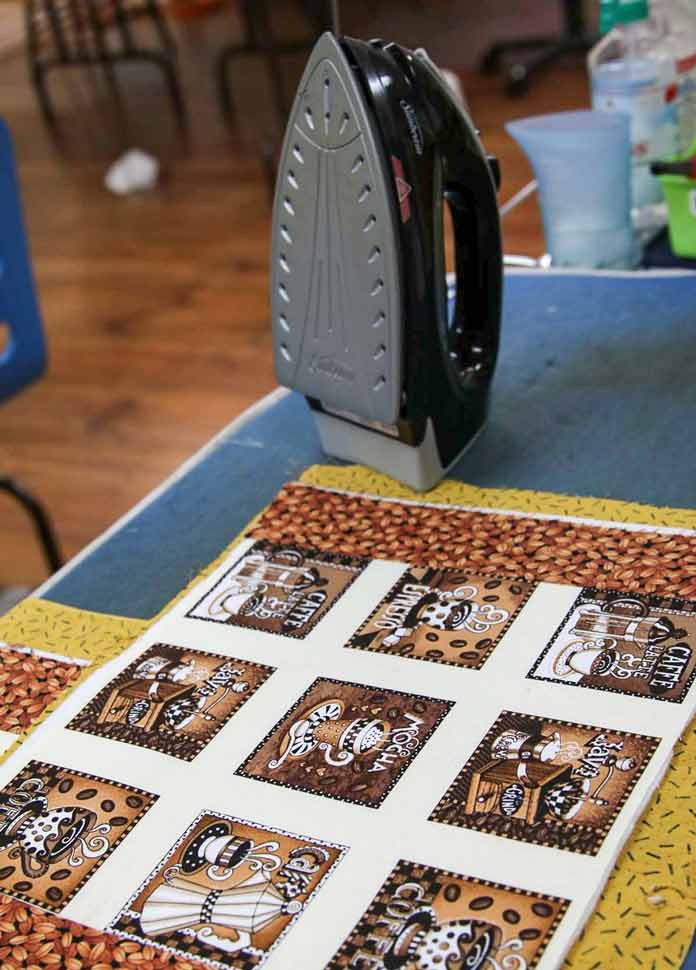 Use an iron to “baste” small items before quilting.

6. The sequence of the stitching

I mentioned above that I was going to stitch around all the little panel squares. That’s what the end result will be, but that’s not really how I’ll stitch the piece. I’ll be stitching straight lines right through the intersections which is why I chose the light beige thread. You’ll see the quilting, but it won’t be the focus of the placemat. Since I’ll be stitching straight lines in four different directions, there’s NO need to pivot around those panels.

It also means that I stitched the entire piece without breaking the thread. If I had stitched around each small panel, I would have had to break the thread after each one. 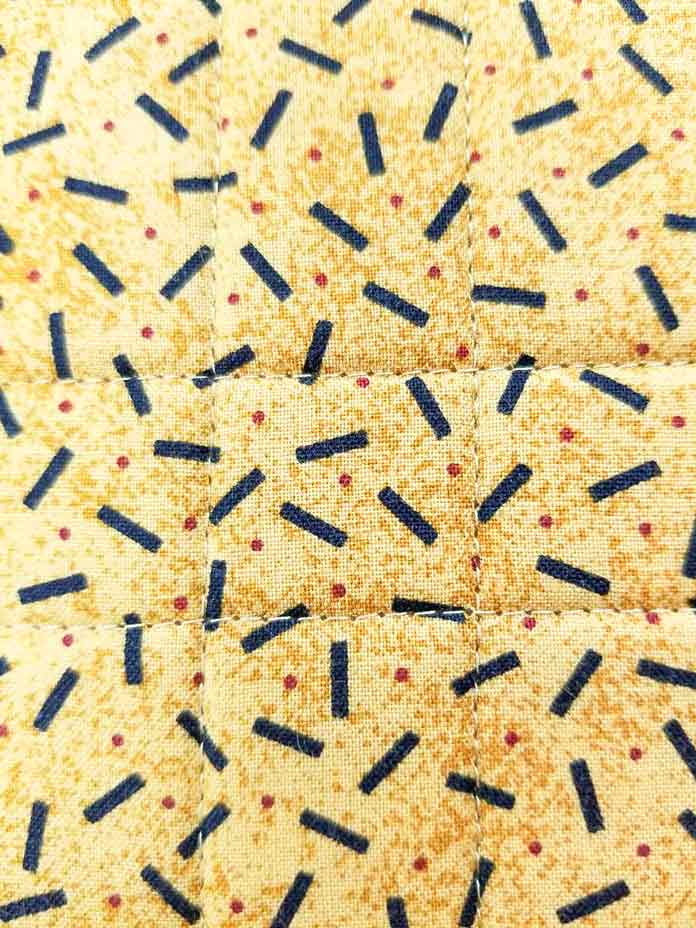 The squares of quilting are formed by straight lines, no pivoting was involved in stitching around the small panels.

To speed up the process and not have to break the thread, I did pivot when I got to the outer edge. I stitched along the perimeter of the placemat until I was lined up for the next row.

Normally, I don’t recommend pivoting under any circumstances. Why? If you don’t do the pivot correctly, the stitch into the corner isn’t allowed to finish and the stitches make a “curved” corner, not a square corner. Secondly, if the area where you need to pivot is in the center of your king sized quilt – that’s going to be very hard to do.

In this instance, the pivot is occurring on the outer edge of the placemat and it’s a placemat, it’s OK to pivot. Just don’t get in the habit! 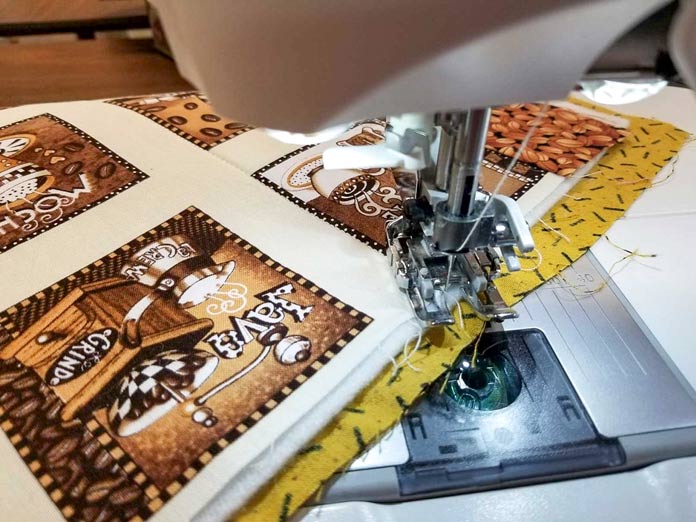 Pivoting along the perimeter of the placemat.

You can see in the photo below how I traveled along the outer edge of the placemat to get lined up for the next row of straight stitching. 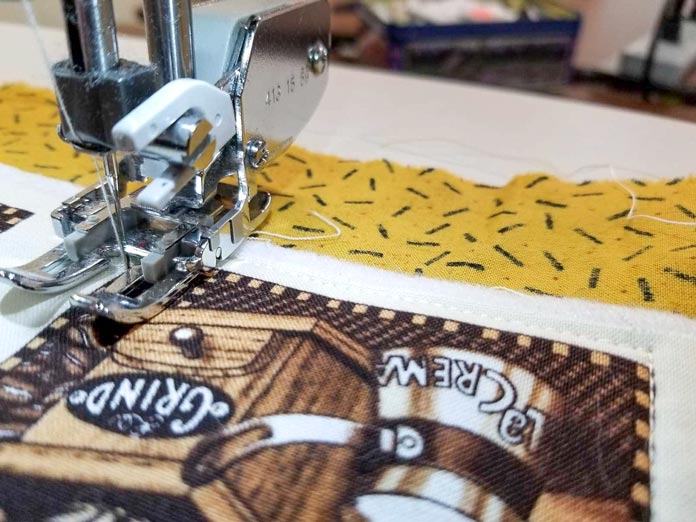 Travel along the perimeter of the placemat to get positioned for the next line of stitching.

I did not worry about starting in the center. I just started and kept going until all the stitching was complete.

A tip when you’re stitching in the ditch. Try to pull the seam apart to allow the thread to bury itself right in the ditch so it’s less noticeable. 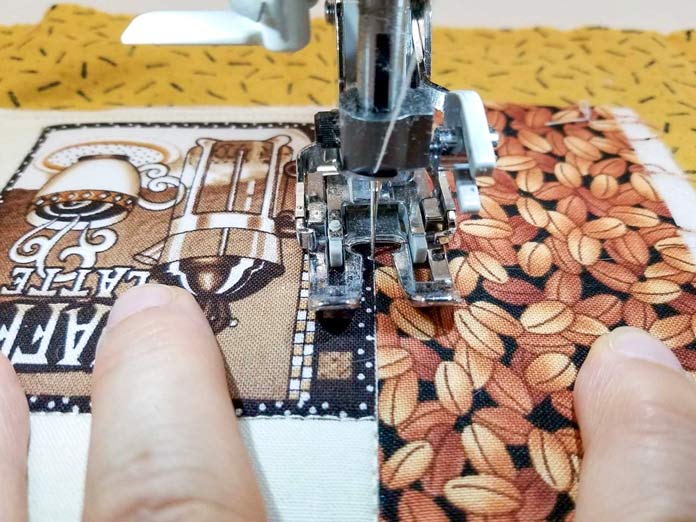 Try to “open” up the ditch when you’re stitching in the ditch.

You can see in the photo below that I have plenty of room on the Opal 690Q to pivot the placemat at the outer edge. Start small with anything new – then work your way up. In this instance, I’m learning the techniques of how the machine stitches and how to control my fabric. I’m not having to figure out how to move a big quilt at the same time. Learn one thing and then move on to the next step. 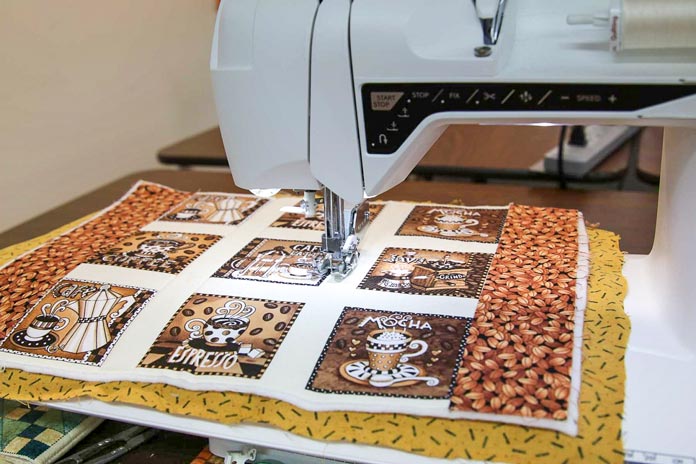 There’s plenty of room to pivot small pieces on the Opal 690Q. 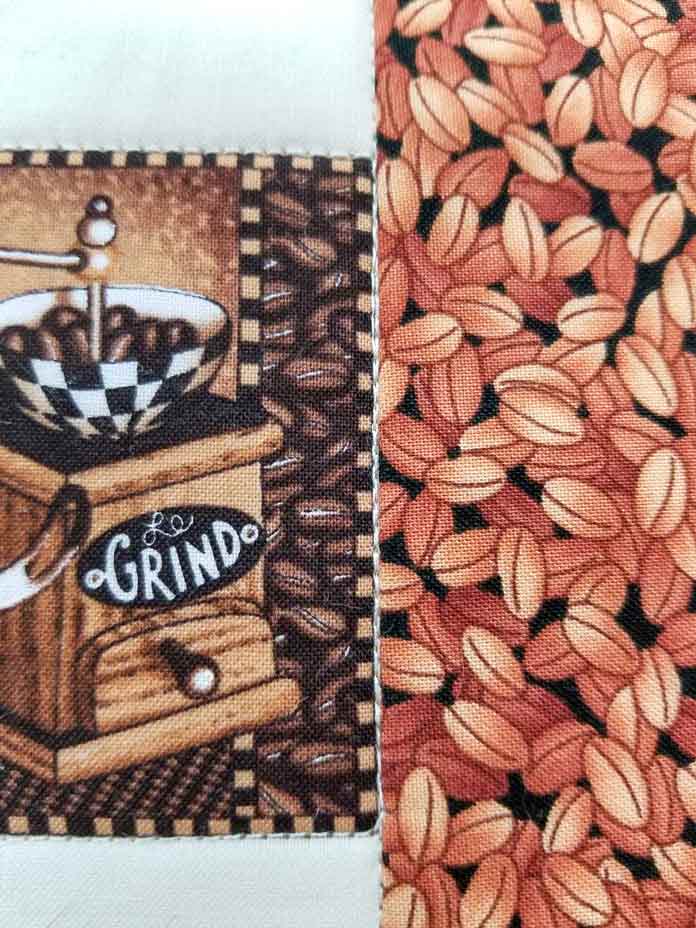 Two rows of stitch in the ditch quilting with 40 weight thread – not perfect, but saved time. 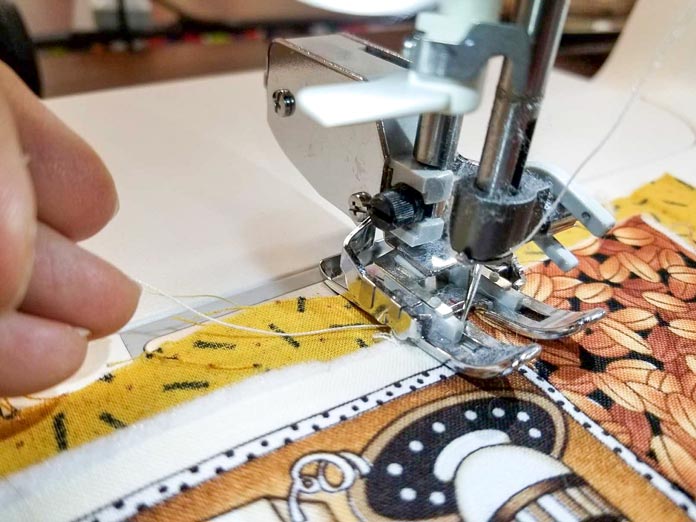 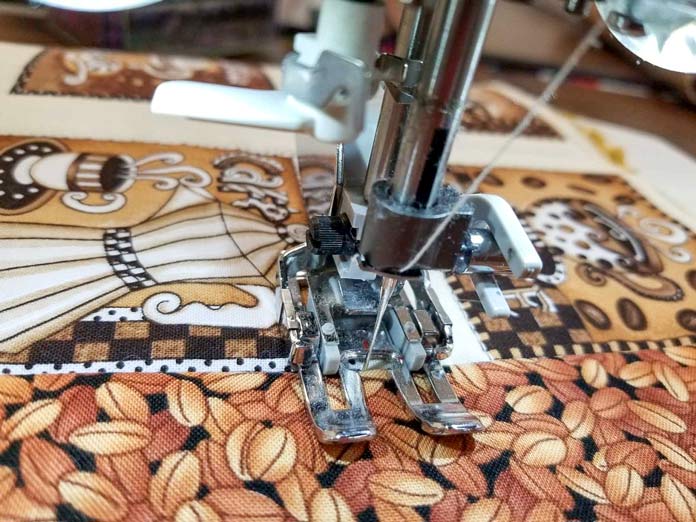 Lift the presser foot and move your work forward or backward to get the needle exactly where you want it.

One of the very practical features of the Opal 690Q is the foot pedal. If you stop sewing with the foot pedal, but the needle isn’t quite where you want it to be, just tap the foot pedal and you’ll advance by half a stitch. Usually, a couple of taps and you’re right where you want to be. This allows you to keep your hands on your work. I do this without even thinking about it. There’s no need to touch the flywheel.

Don’t forget to engage the Needle Stop Up/Down when you’re quilting. Then if you need to take your hands off the work for whatever reason, it won’t shift on you.

There’s also a bobbin sensor which will tell you if the bobbin is getting low. A very handy feature in the event that you’re having so much fun quilting and you don’t realize you’ve run out of bobbin thread. 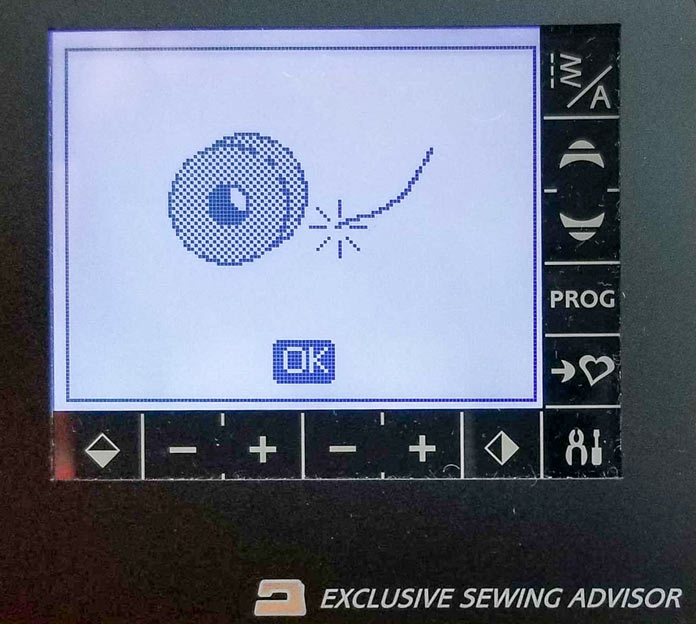 A pop-up message alerting you the bobbin is getting low

Here’s the placemat, completely quilted. It doesn’t have a lot of quilting – it doesn’t need a lot of quilting, but it’s enough to hold everything in place. Each one took about 10 minutes to quilt and we learned a LOT of stuff from this very simple exercise. 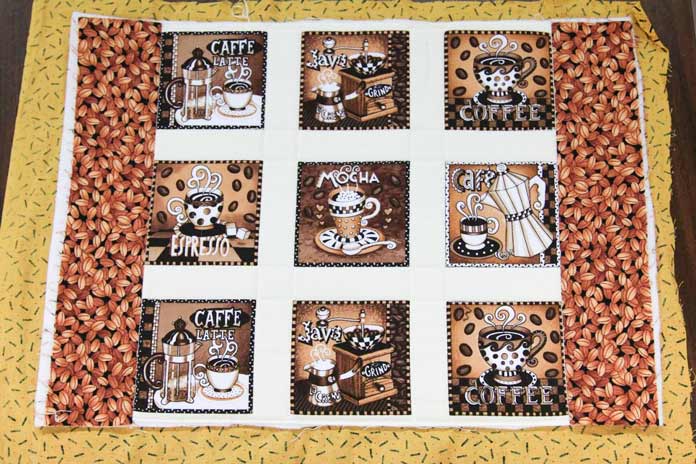 The quilting is completed on the placemat.

All four placemats are complete and ready to be trimmed and have the binding attached. 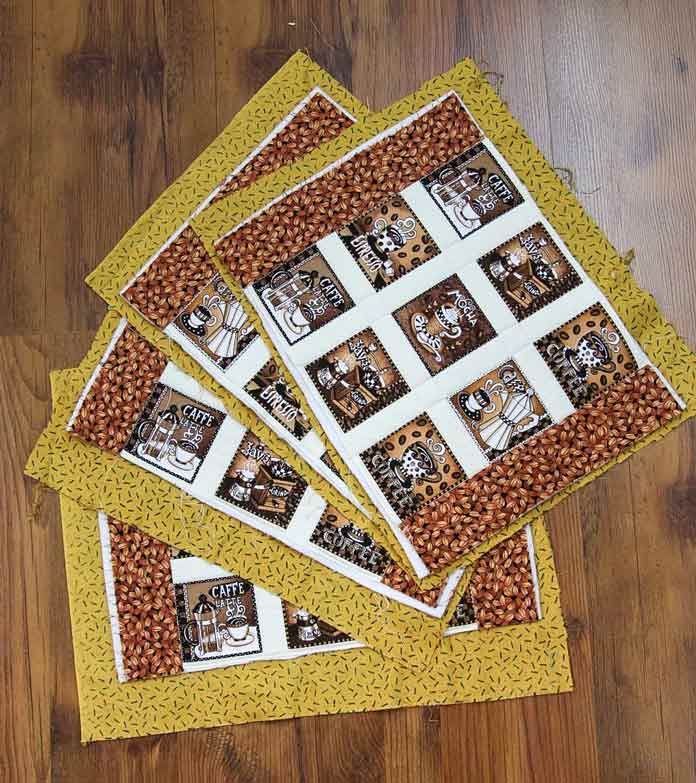 Four placemats are ready to be trimmed and bound.

Wow – wasn’t that interesting? I hope you learned a couple of tips. There’s so much to learn with machine quilting that you need to eliminate all the variables possible so you can focus on just a few things.

Using the Husqvarna Viking Opal 690Q to do the quilting was such a pleasure. There’re a lot of great features on that machine that make quilting so easy.

I’ve got another binding technique to share with you tomorrow. I’ll be giving you an update on my sewing marathon at the end of the week.

This is part 3 of 5 in this series.
Go back to part 2: 10 tips for sewing a variety of quilt seams

The post 7 tips to speed up the quilting process appeared first on QUILTsocial.

How to Turn Your Bathroom Into a Spa

7 tips to speed up the quilting process