3 ways to use a laser guide for piecing

Yesterday on QUILTsocial we looked at the sewing machine help screen on the Dreamweaver XE. It has a wealth of information about operating the machine as well as helpful hints for all types of sewing and embroidery functions.

Today I’m using one of the great features that I talked about on Wednesday – the guideline marker (laser pointer) that is a standard feature on both the Dreamweaver XE and THE Dream Machine 2 from Brother.

Here’s a video I found on the Brother Canada Youtube channel that shows how to use the guideline marker to make half-Square triangles, flying geese units, and snowball blocks.

Setting the guideline marker for ¼”

In order to use the guideline marker to make half-square triangles and flying geese, we need to set it so that it’s ¼” away from the stitching line. I like to use the “J” foot for piecing and to get a ¼” seam I select stitch Q-02 in the utility stitches menu. This is a piecing stitch with the needle in the right position.

Once that is selected, the laser pointer button is selected on the LCD screen of the Dreamweaver XE. Once this button is highlighted (dark orange) you set the position by pressing the “+” and “-” buttons. Press the “-” button until it says “0.0mm”. The laser is now ¼” away from the stitching line. 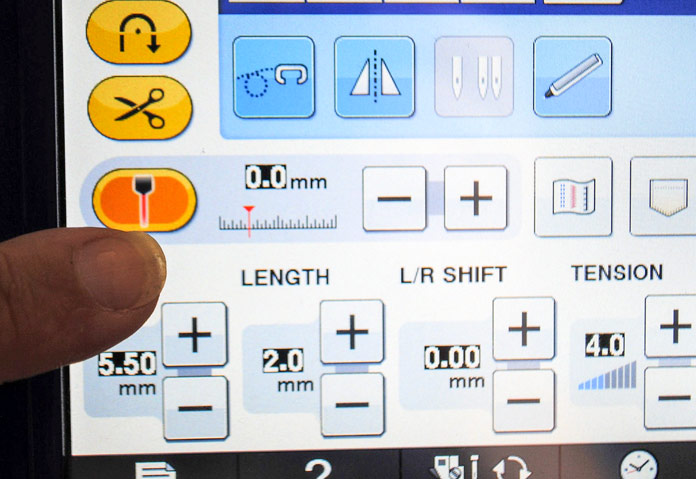 Most of the time your pattern will tell you what size to cut your squares in order to get the correct size of half square triangle units. But if you aren’t following a pattern, it’s pretty easy to determine what size squares you need to cut. All you need to know is what finished size you need – that is, what size you want them to be once they’re all sewn together. You take that measurement and add ⅞″. Personally, I like to add a whole inch which makes my half-square triangle units a bit big so they can be trimmed to the accurate size. For my example, I cut my squares 3″ square, so that I can trim them to get my 2″ finished size.

There are MANY resources on the internet that will help you with this math. Just google “half square triangle calculator” and you’ll find many sites that have a chart already made for you. How nice is that?

Line up the laser 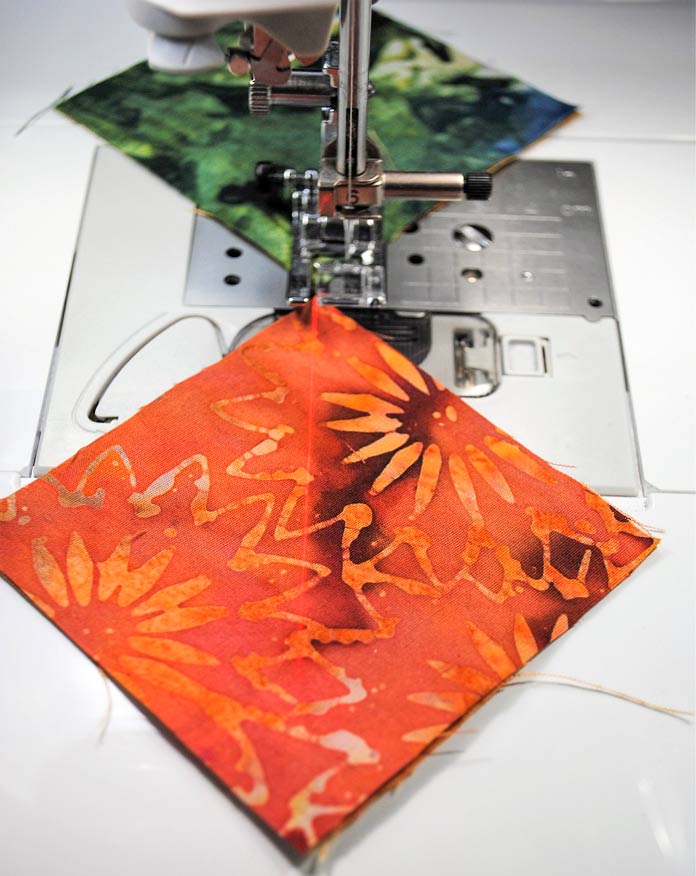 Sewing the half square triangle units

Chain piece one set of squares after the other, and when you get to the end, don’t clip them apart, just flip them around and starting with the last pair, sew the opposite side of the diagonal. Once again, line the laser up with the opposite points of the square. 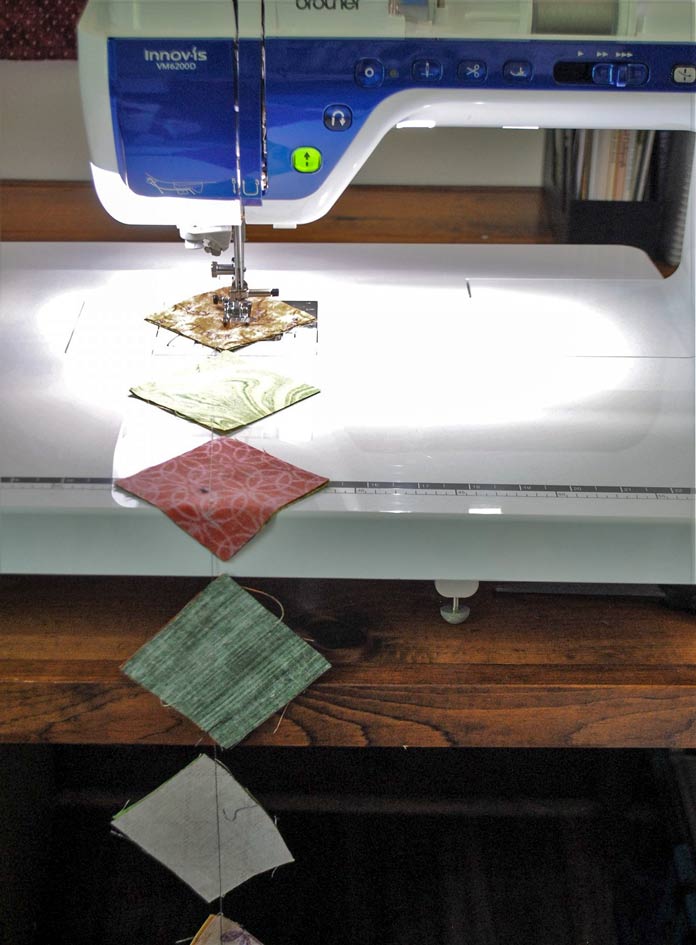 Sewing the second side

When both sides have been stitched, use a rotary cutter to cut between the stitched lines. 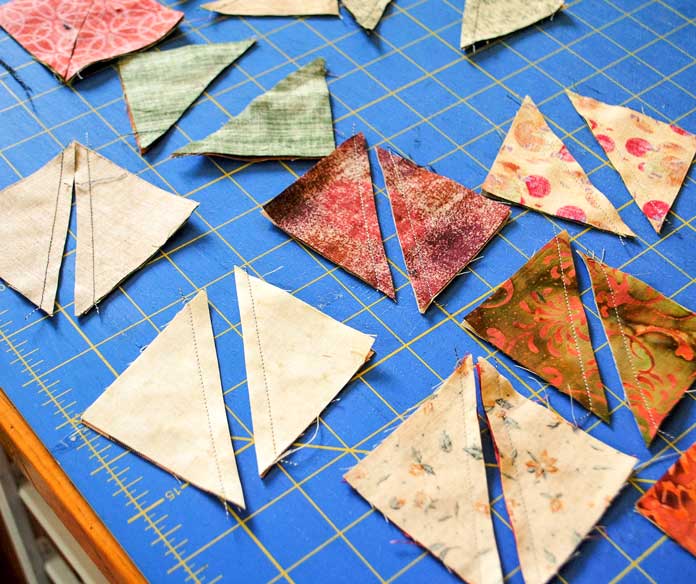 Next, the half square units are first pressed open and then trimmed to the desired size. 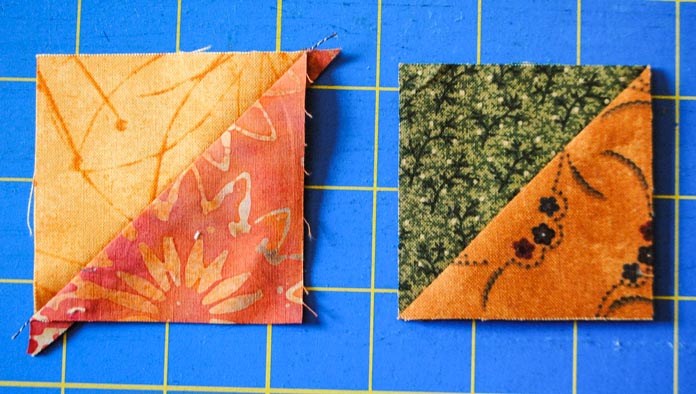 True Flying Geese are rectangular units, twice as wide as they are high. Quilt patterns should tell you the finished size of all geese that are used. But, like before, if you aren’t using a pattern, you follow this method to cut the correct sized squares.

Side triangle fabric: cut four small squares that are ⅞” larger than the finished height of your flying geese. For example, for geese that finish at 3″ x 6″, cut four squares that measure 3⅞”  x 3⅞” (3″ + ⅞”). 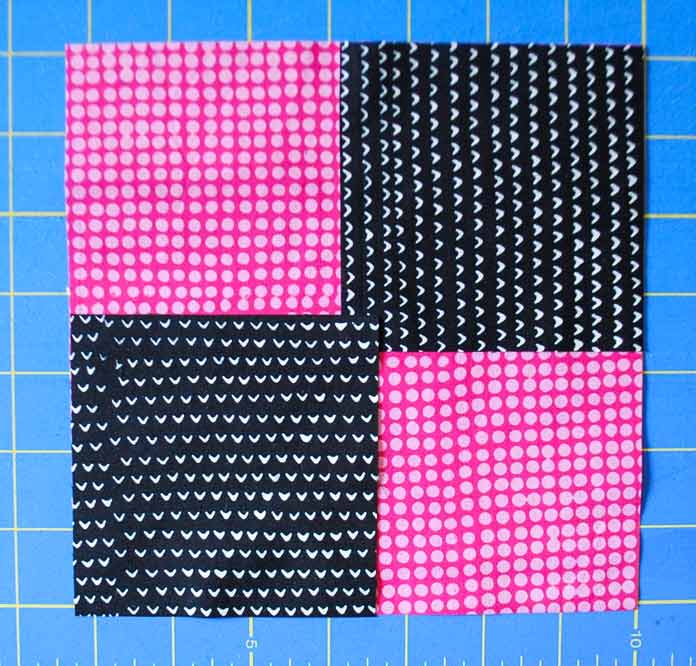 Using the Dreamweaver XE laser pointer as a guide, we sew ¼” away from the center diagonal along both sides. 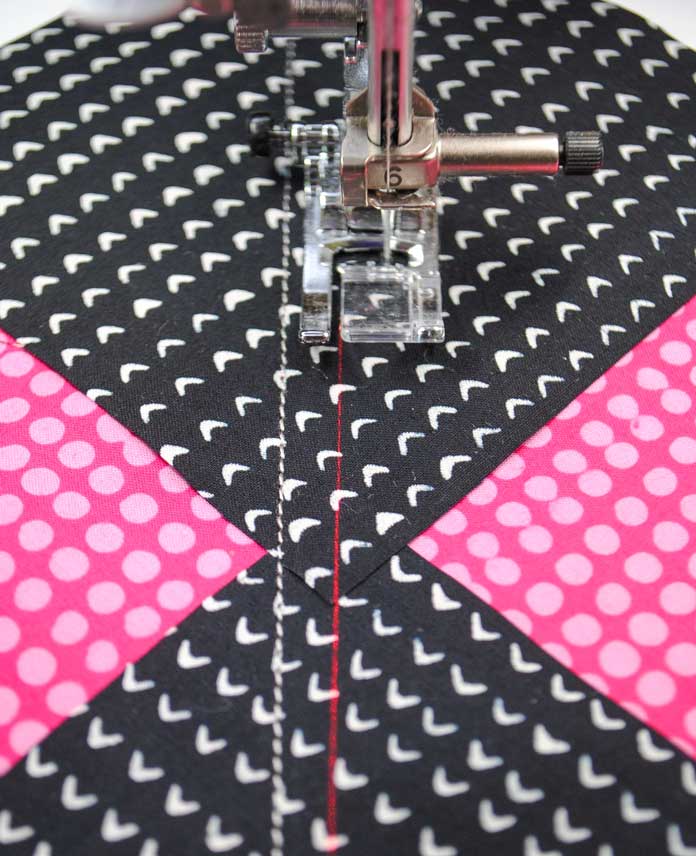 Sew down both sides of center

The two sides are cut apart, using a rotary cutter, down the center between the two lines of stitching.

Press towards the smaller triangles and then align a third small black square on the point of the large triangle. 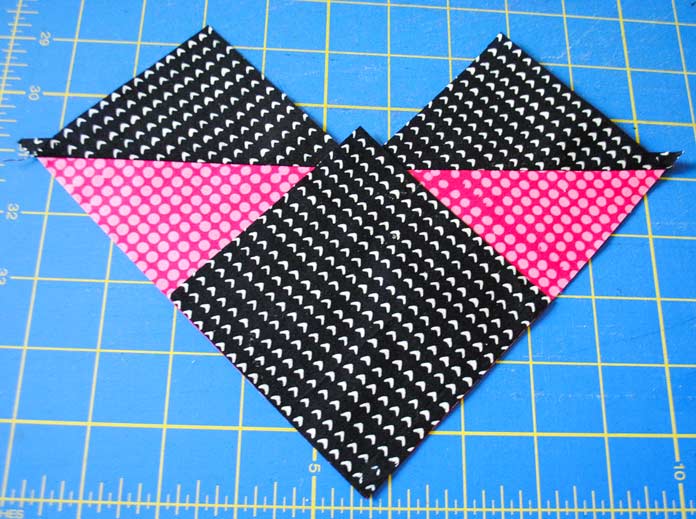 Once again using the laser pointer we sew ¼” from the center on both sides of the square and then cut apart between the two lines of stitching. Press towards the small triangles and the flying geese units are finished. Wasn’t that easy? 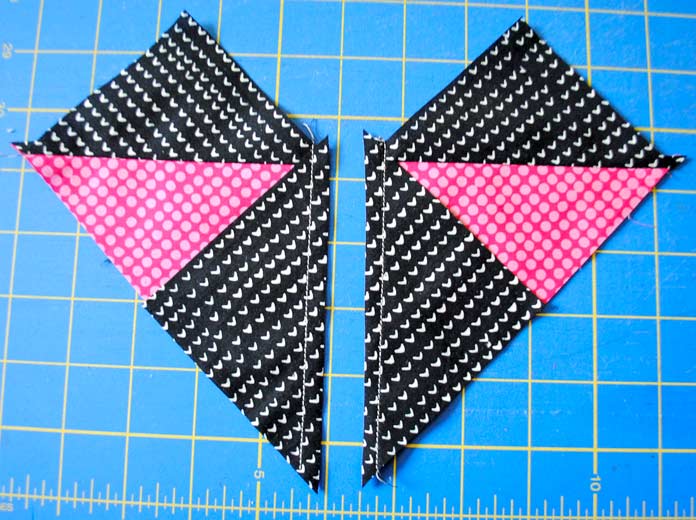 Sew and then cut apart

Here are a couple different colors of flying geese units I made using the same technique. 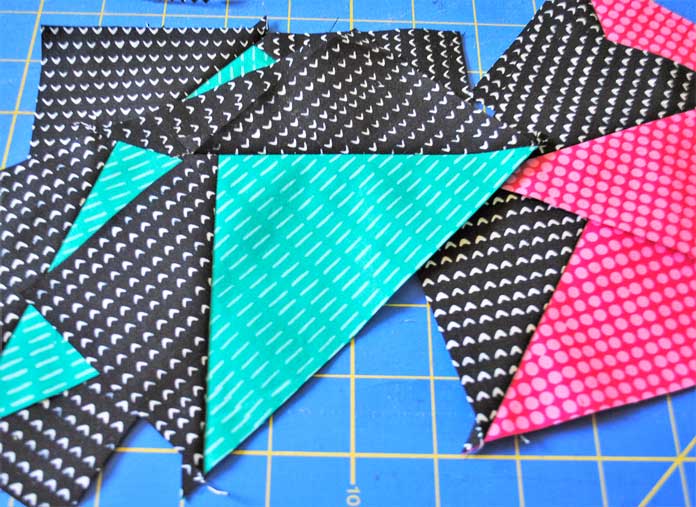 Setting the guideline marker for center

To make the snowball blocks you need to sew right along the diagonal of the small squares, so both, the needle position and the guideline marker need to be moved so they are aligned.

Select stitch Q-01, which is the center stitch and then touch the “+” to move the guideline marker to 3.5mm. As you can see from the display along the left side of the screen, the red line (indicating the guideline marker) is directly on top of the blue stitching line. 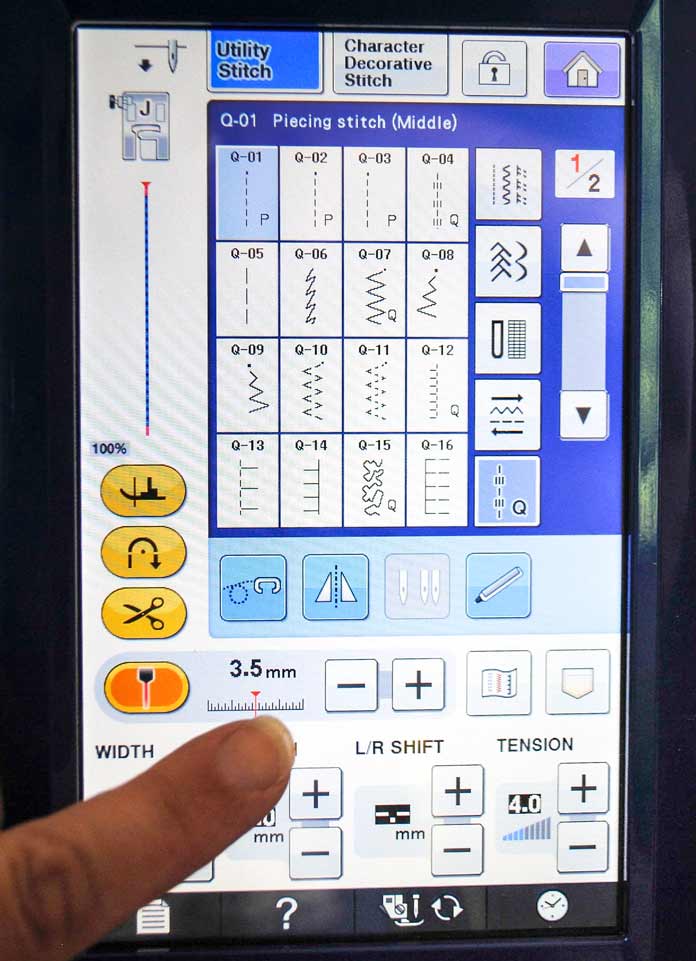 Adjusting the laser and needle position

To make a snowball block you need one large square and four small squares of fabric. To figure out the size you need to cut the fabric, take the desired size of the finished block, divide it by 3 and add ½”. This is the size to cut the four small corner squares. Cut your big square ½” bigger than your desired finished size.

The laser pointer on the Dreamweaver XE is used to sew down the middle of each small fabric square on the diagonal to make the corner triangles of the snowball block. 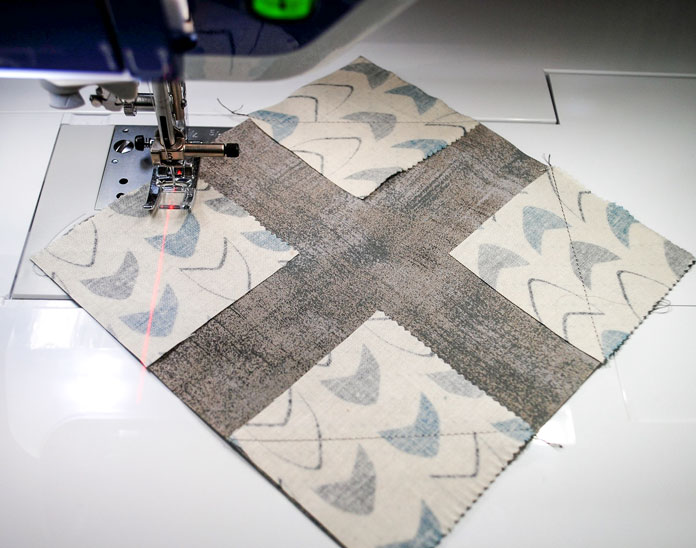 The excess fabric from the corners of the block is cut away before pressing the seams. As you can see, I sewed a second line ½” away from the diagonal so that when the excess fabric was cut off I ended up with four small half-square triangle units – waste not, want not I always say! 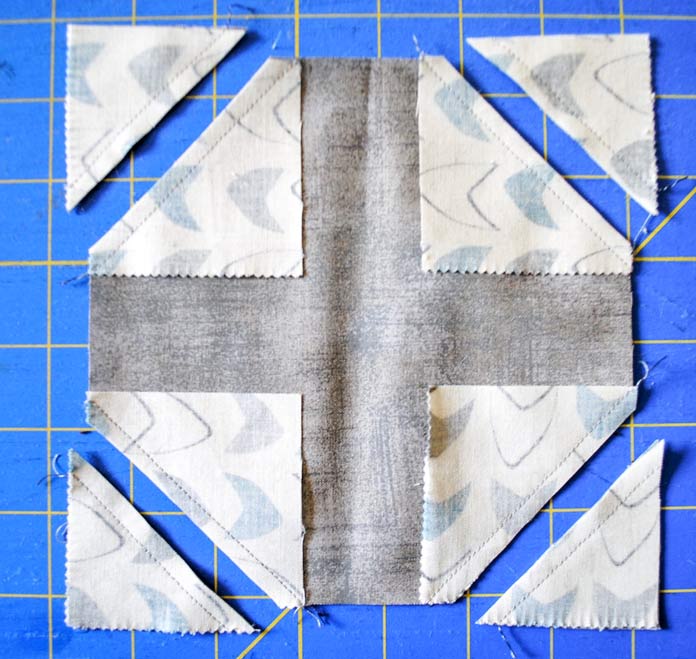 Cut away the excess fabric

Press towards the corner triangles and here’s the finished snowball block. 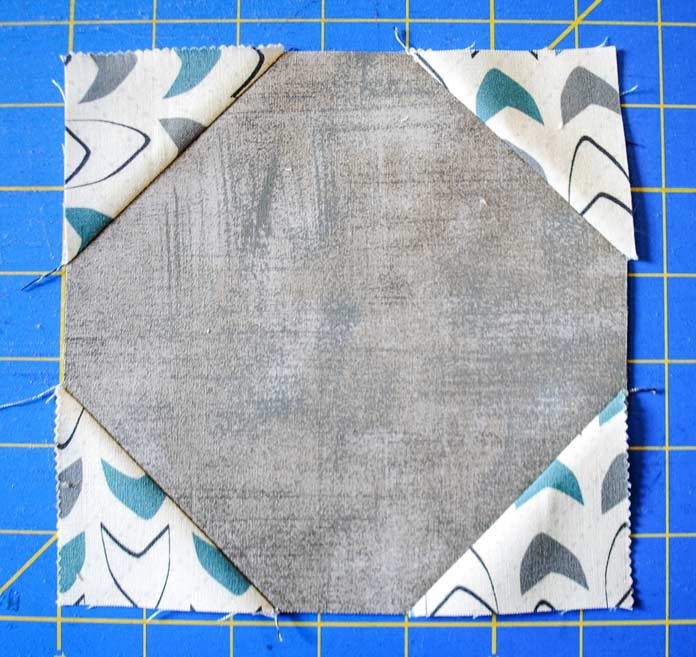 Now that you’re acquainted with the Dreamweaver XE from Brother, next month I’ll have a fun project to make. I think it will have something to do with either half-square triangles or snowball blocks – you’ll have to join me to find out. Have a great month!

This is part 5 of 5 in this series.
Go back to part 4: Help is always close at hand with the Dreamweaver XE

The post 3 ways to use a laser guide for piecing appeared first on QUILTsocial.

3 ways to use a laser guide for piecing