Quilting a hand embroidered piece and making doll clothes, is so much fun!

Welcome back. The week is already over. How did that happen? Hopefully, you’ve enjoyed the week with all the tips and ideas. If I’ve inspired you to quilt/make/fix one thing, I’m happy! 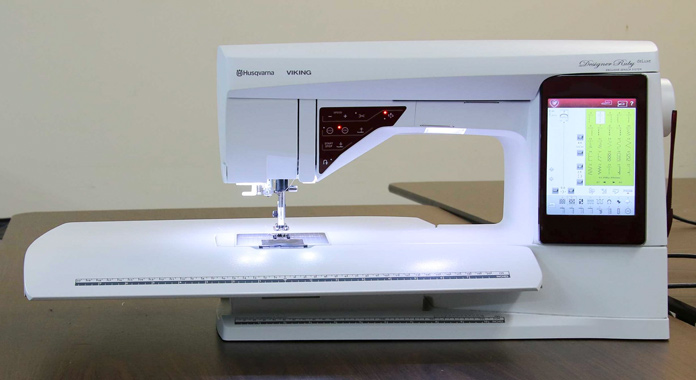 Technically, you could quilt a hand embroidered piece similar to the machine embroidery piece that I showed you yesterday. The only problem is that hand embroidery tends to have more open spaces and to me, it seems more delicate and all that free motion can just muddy the design. Maybe that’s just me who feels that way.

Today I’ll do things a bit different. Plus you’ll get another idea for quilting a wallhanging or hand embroidered quilt blocks. 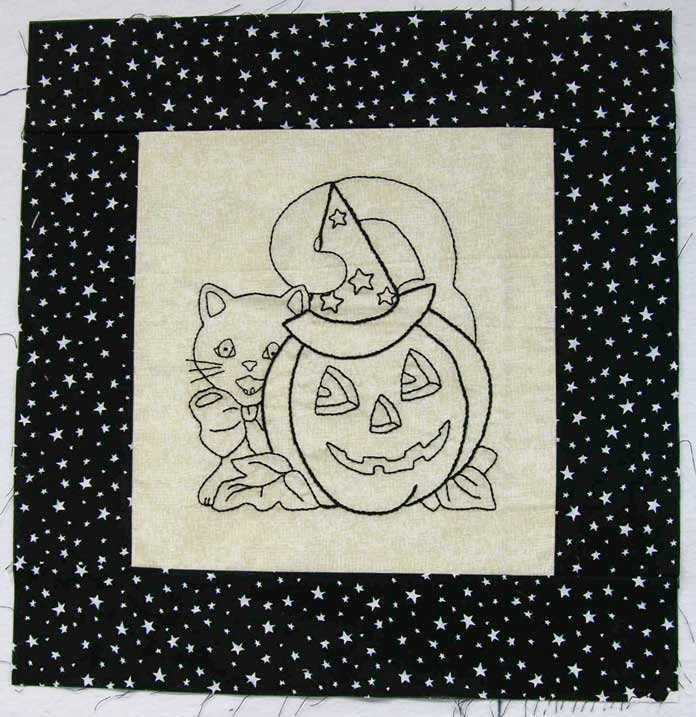 This piece is quite small measuring 15″ square. There won’t be any issues to maneuver this quilt under the arm of the sewing machine. This is the type of project that people should learn to quilt on – small in size and the threads will completely blend into the background, so no one will know if your stitches were consistent or not.

I’m stitching in the ditch around the outline of the block. Again, I used my iron only basting method from yesterday. I don’t think I even stuck pins in this one.

Instead of attaching the Dual Feed Foot for that one outline, I decided this was a good place to do free motion stitch in the ditch. I still had the Spring Action Free Motion foot attached to the Designer Ruby deLuxe.

I did change threads. This time, I have invisible on the top and I’ve got a matching thread (beige piecing thread) in the bobbin.

Using the same techniques as yesterday for holding the quilt while doing the stitch in the ditch with the Dual Feed foot, I quilted around the edges of that block. Yes – if I looked at the lines on the back, they might not be perfectly straight like they would be if the lines had been stitched using the Dual Feed foot, but you can’t see the lines because of the busy back that I put on this wall hanging and the stitches don’t show on either the front or the back so who is going to know? 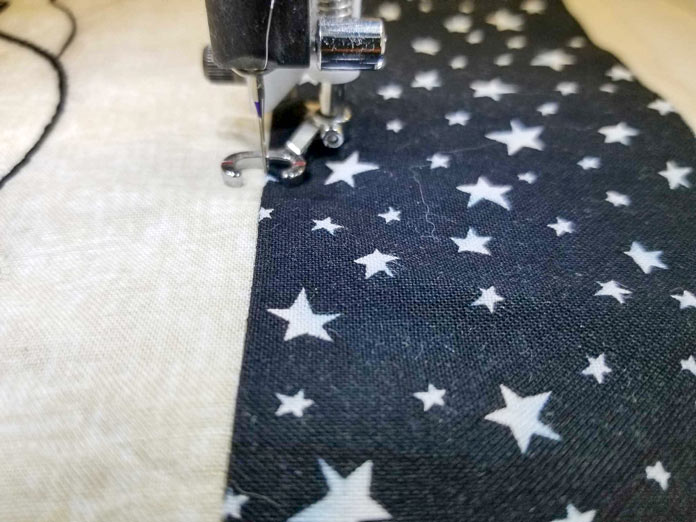 I learned this technique a long, long time ago. I had some major stitch in the ditch to do and I wasn’t going to do a lot of shoving and pushing or stopping and starting. The quilting wasn’t perfect on that compass quilt, but the free motion stitch in the ditch sure saved a lot of time to quilt that quilt and I’ve been saving tons of time with this method ever since. A good skill to learn!

Then it was time to choose the style of quilting for the embroidery. Personally, I like to stitch just beside the embroidery lines. I may change that up depending on the design but in this case, I think it works well to stitch along the lines of embroidery. 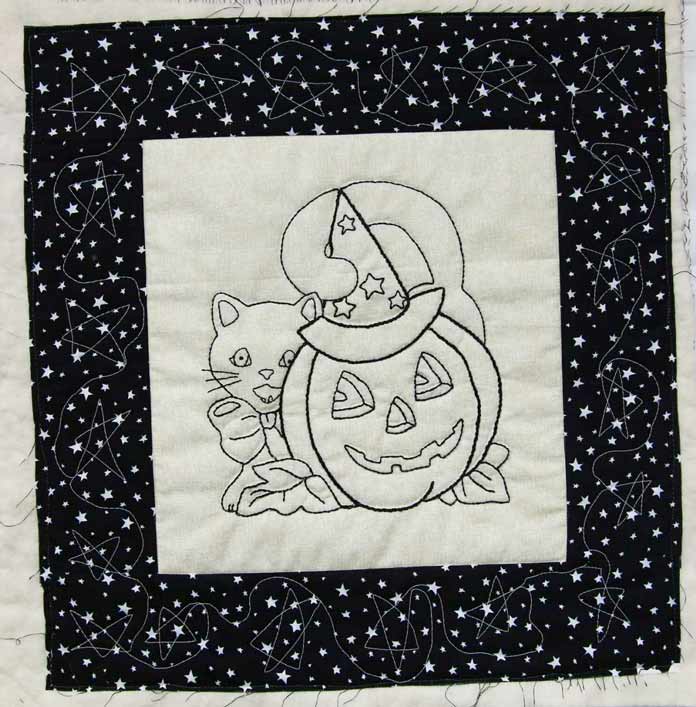 Lines of embroidery are highlighted by “stitch in the ditch” quilting with invisible thread.

I didn’t go around some of the smaller details like the stars on the hat and the cat’s face. That’s OK. You could if you wanted, but it’s not necessary to keep the integrity of the piece.

If I wanted to, I could have done some loose overall stitching in the background to make the image stand out a bit more, but you have to be careful with the density. If you quilt that background too tight, the pumpkin will puff up similar to my machine embroidered piece yesterday.

This is a seasonal wallhanging and it looks just fine like this. 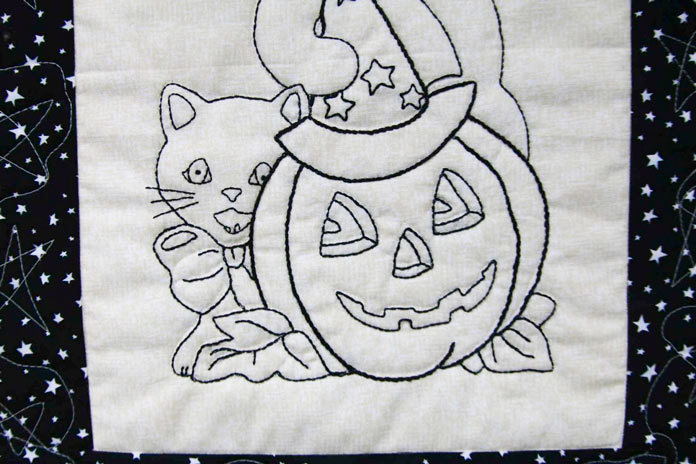 A closer look at the quilting around the hand embroidered stitching

Here’s a close up of the stitching that I did in the border. Normally I would have done that with a darker thread – maybe grey or even black. But this is a glow in the dark thread so it looks neat when the lights are off. I wanted to do the entire pumpkin face with the glow in the dark, but it didn’t look great if I accidentally stitched the white thread on the black hand stitching. That got ripped out real quick.

The stars were done fast and are by no means perfect. That’s OK. It’s a small seasonal wallhanging. No one should be losing sleep if the stars aren’t perfect. What I do like is that the Designer Ruby deLuxe made PERFECTLY formed stitches and I managed to do a pretty decent job with the stitch length. I’m happy!

And now that one goes onto the binding pile along with the rest of the quilts waiting to be bound. 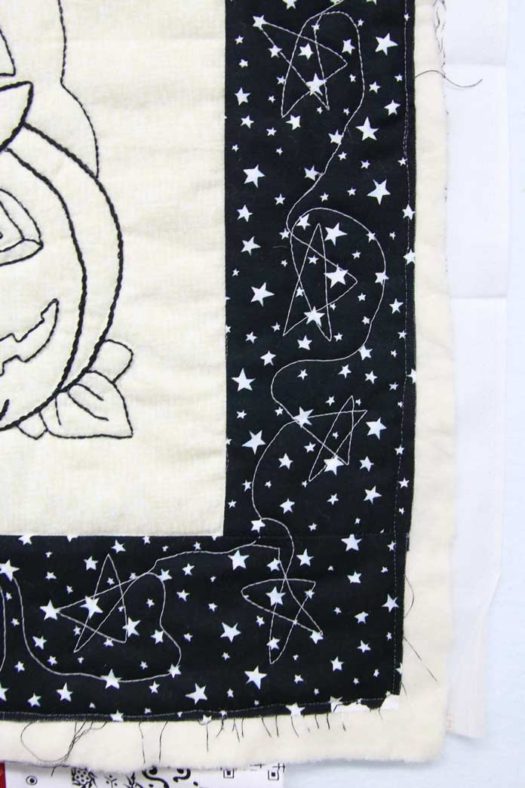 Quilted stars in the border using glow in the dark thread.

While I was on a roll and the Designer Ruby deLuxe was set up, I decided to quilt another small hand embroidered wall hanging that was sitting in the “to be quilted” pile.

I basically followed the same method as for the Halloween project. I used invisible thread to outline all the lines of hand embroidery. I didn’t do the feathers on the owl body and wings. I stitched in the ditch using the free motion technique around the perimeter of the block and around all the stitching on the leaves, flowers, and the owl.

I used a matching thread for the backing. It was a cream piecing thread. I used invisible for all the stitching on the top. 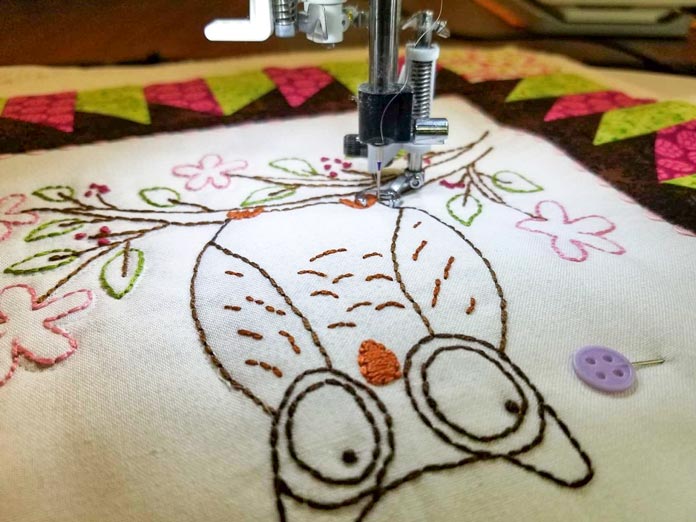 Stitching in the ditch beside the lines of hand embroidery stitches

I also decided to quilt all the border seams with stitch in the ditch using the Spring Action Free Motion foot. Note on the border that I could stitch in either a sideways motion or an up and down motion whichever worked best for me. It’s nice to have options and it’s nice to have a sewing machine that will make great stitches depending on what is easiest for me, not what is easiest for the sewing machine. 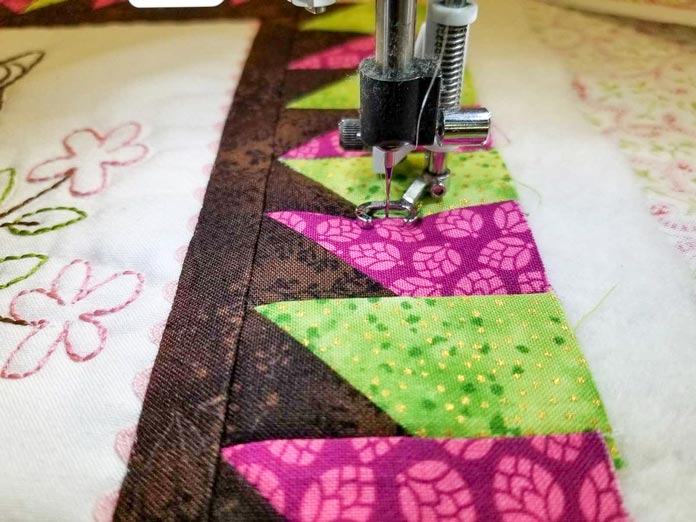 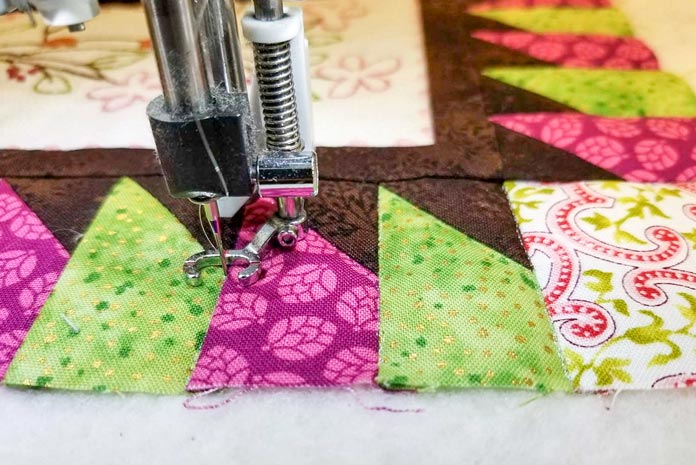 Here’s the finished wallhanging. It needs to be trimmed and have the binding put on. Yep – this one is also going on the pile of quilts to be bound. I will have to break down and start doing one or two a day as the pile is getting rather large.

Hand embroidered wall hanging quilted and ready to be trimmed 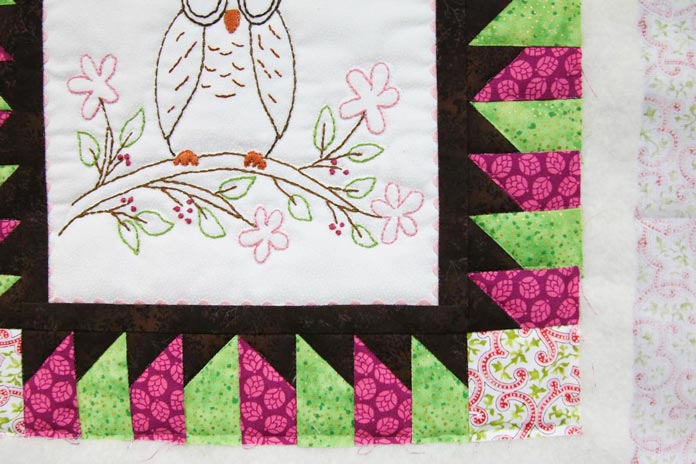 A close up of the quilting with invisible thread

Back to my childhood sewing…

I have to confess that for months, (OK – so it’s more like years), I’ve been wanting to make Doll Clothes. I’ve no one to give them to. I don’t even have a doll to put the clothes on, but I love little things and doll clothes are little and they’re cute.

I found some extra time this week to get one outfit made. It’s a great use of the sewing machine and my quilting tools so I thought I would share my experience with you. 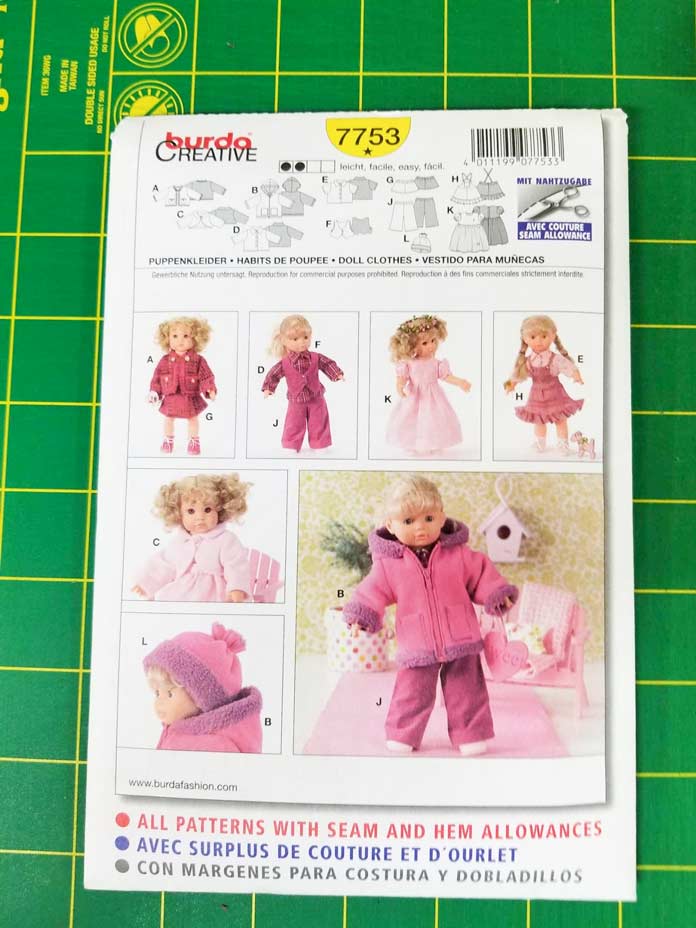 Doll clothes pattern for an 18″ doll

It’s been a while, so I’m starting with something simple. A pair of pants and a long-sleeved shirt. I went through my fabric stash and found some denim for the pants and a nice pink gingham for the shirt. 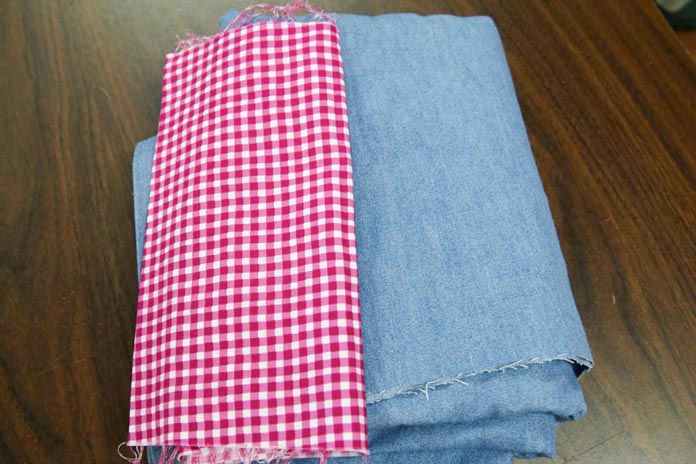 I started by cutting the pattern pieces that I needed from the pattern tissue. Then I evaluated the tools that I needed to cut out the fabric pieces. I was certain that if I used flower head pins, that I’d be able to use my rotary cutters and a ruler to cut some parts of the pattern.

I also dug out some of my threads that I can use to sew the clothes and I chose matching threads because some of the stitching is going to show. 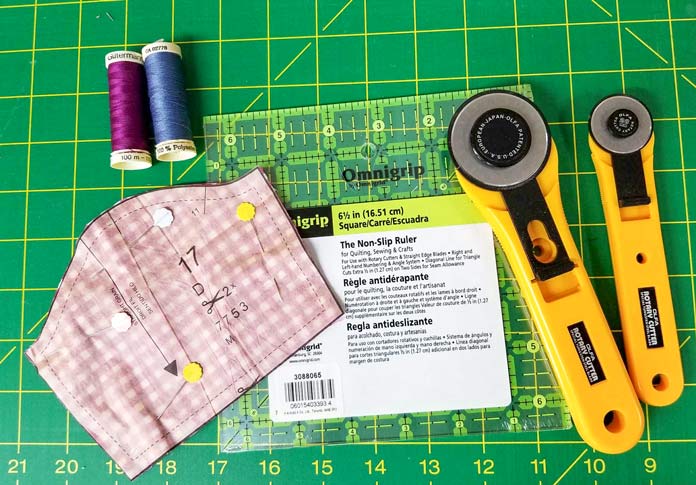 Here are some of the accessories that I will need. Elastic, velcro (sew-in velcro is my favorite), and look at those teeny tiny buttons. I wasn’t sure which size I would need for which application, so I got all sizes. They are so darn cute!! 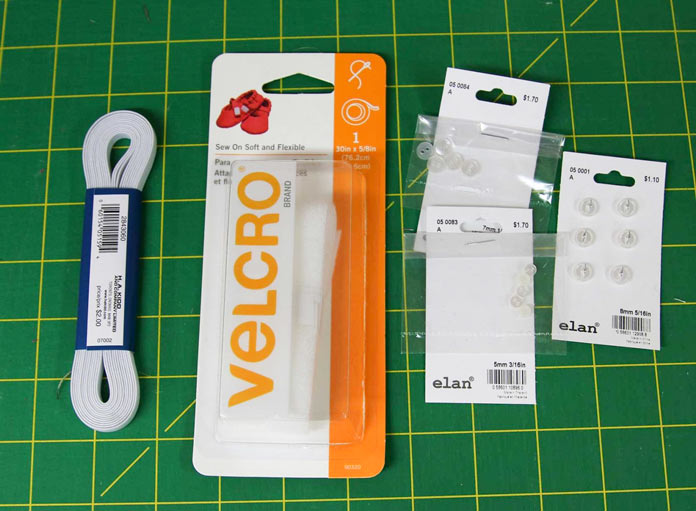 Items for finishing the doll clothes

I used to sew doll clothes years ago and I used to do a lot of garment sewing years ago as well. Things have changed and when I went to cut out the pattern, I decided that the rotary cutter was probably a lot better, faster and easier than scissors.

When I cut the pants out, I didn’t trim excess tissue paper away beyond the cutting line. That made it a wee bit challenging to keep the pattern tissue flat.

When I cut the shirt out, I trimmed the excess tissue paper away prior to pinning the tissue pattern to the fabric and using the rotary cutter worked like a charm.

Cutting out the pattern using a rotary cutter

I used my ruler on all the straight edges of the pattern. This is why it’s important to use those flower head pins. They are flat and in no way impeded the ruler. I used the small rotary cutter on the curves and the medium cutter on the rest.

The pants and the shirt were cut out in no time! 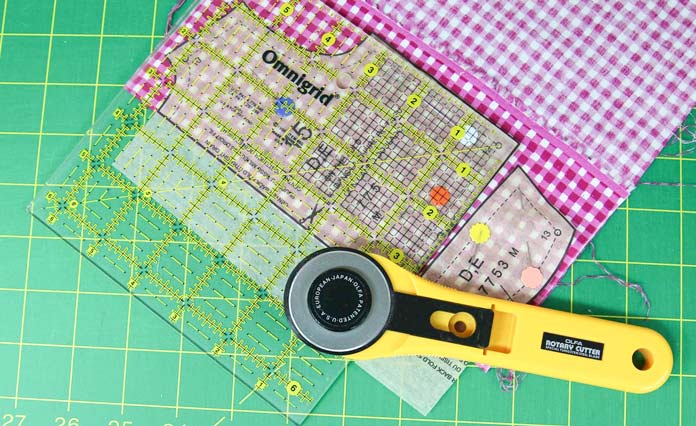 Here’s something exciting. I can use my Quilter’s P foot (¼” piecing foot) to sew the doll clothes as the patterns are made with a ¼” seam allowance. Isn’t that exciting? It will be a snap to get these clothes sewn together. 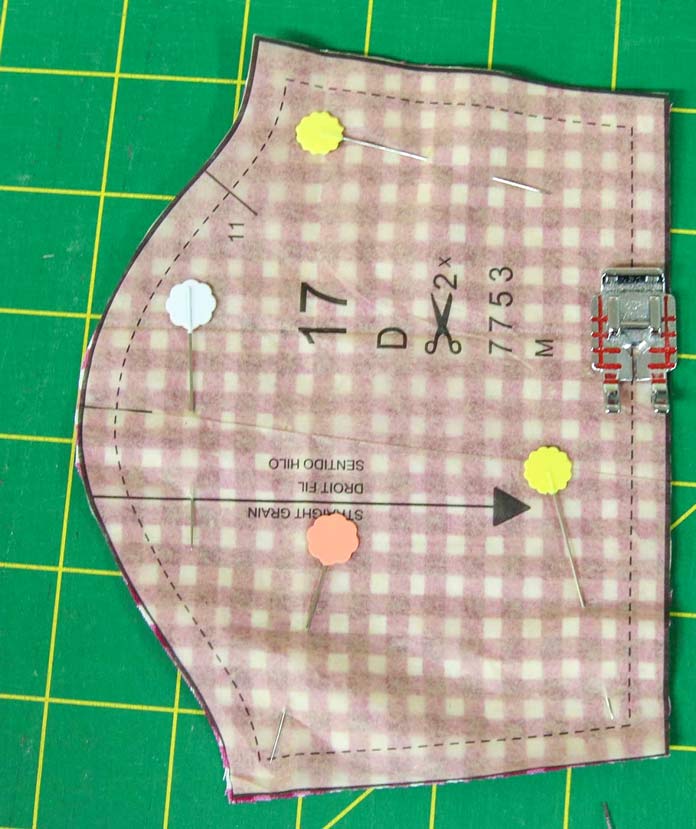 Here they are – my first shirt and pair of pants for my pretend doll. Yes – I know the pants aren’t finished, but I needed to get the picture taken and I was running out of time.

Let’s just say that some of my garment skills are a tad rusty, but I was able to use a lot of my quilting skills. Insetting those sleeves was just like a curved quilt seam. My quilter’s awl came in darn handy and there are so many techniques and machine features that I used that I decided to save them for the next set of posts. I’ll take a day and walk you through what I did and what tools I used and where. It was loads of fun and I have a lot of ideas on how to improve the process. 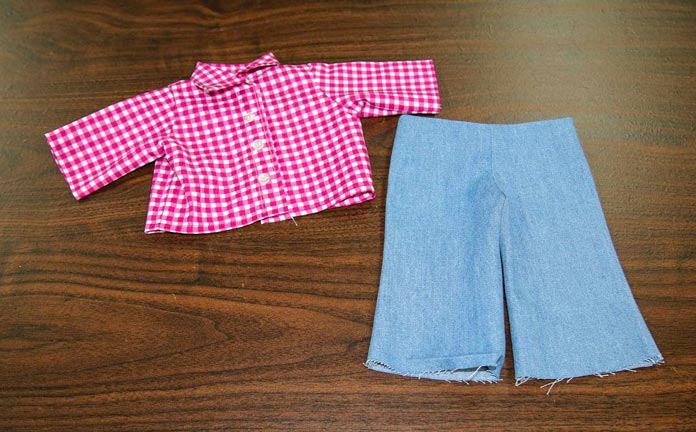 Shirt and pants for an 18″ doll

And there you have it. Some more great ways to use the Husqvarna Viking Designer Ruby deLuxe. The more I sew, the more I want to sew. The more features I uncover, the more I want to try them on different things which is why I decided to try the doll clothes. I really want to try some garment sewing again. The good thing about doll clothes – you don’t need to worry about fit! Now where to find an 18″ doll who can model her new wardrobe?

I hope you enjoyed this week. I hope you found some tip or idea that can motivate you or inspire you!

This is part 5 of 5 in this series.
Go back to part 4: 9 key steps to machine quilting a machine embroidered wallhanging

Cabbage Production Guide
5 Easy style hacks every woman should…
روبي – حتة تانية
MICRO BUSINESSES
How Do You Get Bed Bugs?

The post Quilting a hand embroidered piece and making doll clothes, is so much fun! appeared first on QUILTsocial.

Quilting a hand embroidered piece and making doll clothes, is so much fun!