Lessons From a Heat-Stressed Desert Garden Let’s face it. Hot summers are not surprising to desert dwellers. In fact, a typical Garden with native and desert-adapted plants will weather intense heat with little fuss.

However, this summer has been one for the books and I’ve seen signs of heat-stress that I’ve never seen before. And yes, within my own garden. I must admit that it’s been hard to see certain plants struggling in my garden and I know you may have similar feelings. So, why has this summer been so much more difficult than others? Pink Trumpet Vine partially defoliated due to the heat

While it is normal to have several days above 110 degrees F., the summer of 2020 is one for the record books. We have experienced not just a couple of stretches of above-normal temps but, several long spans of infernal heat. Damage to plants is often cumulative. This means that the more days of above-average (or below-average) temperatures – the higher incidence of reaction from plants.

Take a walk outside in your garden. You will likely notice some plants that are yellowing, wilting, or have given up and died. However, you may also note that there are some that are doing well.

Why is that? Let me show you some examples from my own garden – the good AND the ugly.

Let’s start with the ugly: In March, much of my backyard was renovated. This included the addition of two separate plantings of Mexican Fence Post cacti. They are located along my back wall and as you can see, one is doing very well while the other makes me cringe when I see the yellowing.

Does the yellowing cactus need more or less water? No. Many succulents yellow in response to summer heat. Of course, this very hot summer has made it more severe. So, why the difference between the two?

The one on the left gets filtered shade in the afternoon from a nearby Palo Verde tree. You can tell that the one on the right doesn’t get any shade but full afternoon sun. In a normal summer, it would be normal to see some yellowing that will return to green once temperatures cool. I am hopeful that will happen. As plants age, they tend to handle heat stress better and as these are young, the stress was especially severe. In another area of my garden, I have Green Desert Spoon and Hardy Spineless Prickly Pear, which are very heat-adapted. Yet, they do show signs of mild heat-stress that I haven’t seen before. But, they will green back up in fall. Other plants that are struggling include Artichoke Agave, Gopher Plant, and Shrubby Germander.

I am thrilled that my young Desert Willow tree in this photo is thriving despite the heat. I have four others scattered throughout my landscape and all are doing just as well.

Here are some of the good: Pink Muhly (Muhlenbergia capillaris). Will soon burst forth in burgundy plumes in fall. Here are a couple of exceptional performers that get full, reflected sun: 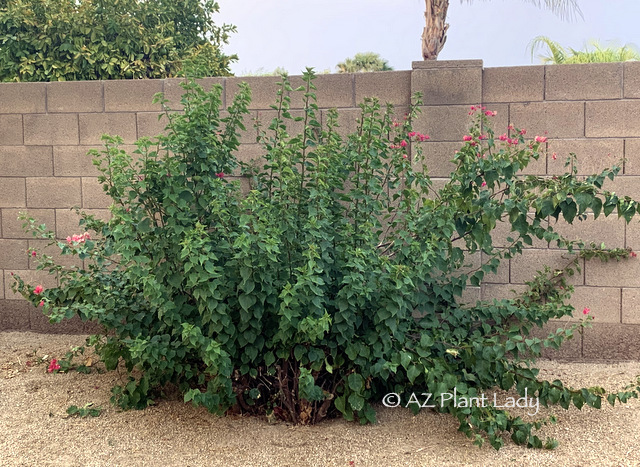 There are still six weeks of summer heat ahead of us. So, what should we do for now? 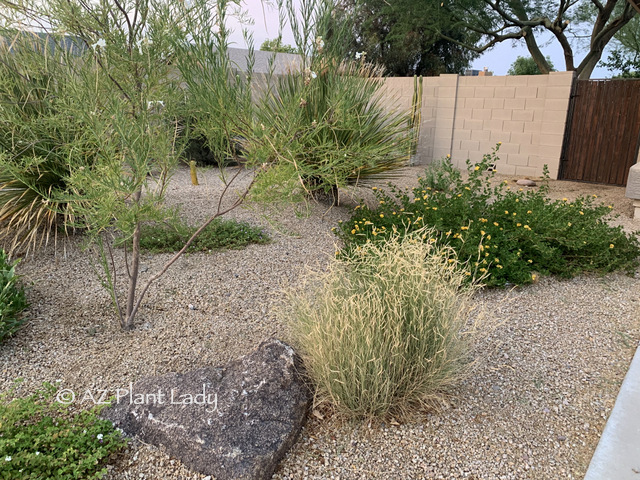 We don’t know if this summer will be an anomaly or the beginning of a new normal. But, instead of throwing in the towel, I invite you to do the following instead:

Take a stroll through your garden and take note of which plants are doing well and those that aren’t. If this is to be the new norm, it would be a good idea to add more of those that handle the heat well. I am not going to make any major changes in my own garden. Most of my plants have done just fine in past summers. I’ll replace the few plants that died but am hopeful that next summer will be one with average temperatures. If not, then I know what plants have withstood the heat best.

Before we know it, fall will be here, and I for one, can’t wait!

Lessons From a Heat-Stressed Desert Garden