Hello SixPrizes readers! I hope those of you who celebrated Thanksgiving had a fantastic holiday with plenty of delectable food. Right now we are at an awkward time in the competitive Pokémon TCG world. League Cup information has finally been announced and I am sure TOs are scrambling to get them scheduled for us! As far as current tournaments, players are focused on various upcoming events. Some of us are looking to London, some to the ARG Invitational in Orlando, others are preparing for San Jose Regionals, and then there are those who are calmly enjoying Sun & Moon.

How to Develop an Educational App?
Best Low Acid Coffees That Won’t Upse…
Wealthy Affiliate Scam or Not
Step-by-Step Guide on Creating the Ul…

Today I am going to be looking at the Expanded format, which is what will be played for San Jose Regionals. In fact, San Jose will be the first major event to use the BLW–EVO format. Evolutions is not a completely game-changing set. We got some strong tech cards such as Mewtwo, Mewtwo-EX, Rattata, Dragonite-EX, Clefairy, and Brock’s Grit. Evolutions also contains a few potent Evolution cards such as Electrode, Starmie, and Raticate. This is not nearly the amount that one could expect from the set’s name.

While there is a decent amount of playable cards in the set, none of them will impact the meta in Expanded. They will be played as techs in already existing decks. Therefore, I expect the meta for San Jose to be similar to the metas in Phoenix and Philadelphia. In this article I am going to extensively cover three of the most promising Expanded decks. These decks seem like incredible plays because they perform well against the meta decks such as Dark, Trevenant, Toad/Bats, and more.

First I’m going to look at an old favorite of mine, followed by two exceptional rogue decks. I’ll be sure to explain the key cards in my lists and go over matchups against each major deck in the Expanded format.

A lot of people do not like Mega Manectric in Expanded anymore because it only does 110 damage and rarely OHKO’s things. While Manectric only has a few Day 2 finishes, its matchups are actually incredible and it beats nearly everything relevant in Expanded. I played it at Philly and ran into a few too many bad matchups, narrowly losing to Donphan, Rainbow Road, and Groudon twice. Fighting decks are awful matchups, but luckily they are not very popular right now. I lost to Rainbow Road because I dead drew the first game and committed to Jolteon-EX in the second, only to be surprised by Xerneas BREAK.

Jolteon is used in a few matchups. It rolls Dark/Tina and Turbo Dark by itself. It also is great against Rainbow Road if they don’t run a counter. However, some do run Xerneas BREAK or Gallade. In Game 1, you want to find out if any counters are played, so you can adjust your strategy for Game 2 accordingly. Opening with Jolteon is great in any matchup thanks to its free retreat.

Mewtwo is nice if you want a strong attacker not named Manectric for whatever reason. It is particularly powerful in the Groudon matchup, and actually gives you a fighting chance. However, Mewtwo’s main reason for being here is to counter Gallade. Gallade is public enemy number one for Manectric, and it is the only reason why Yveltal stands a chance against this deck. Mewtwo is a terrific answer to Gallade because it can OHKO Gallade for minimal investment.

Wobbuffet serves as the deck’s Archeops counter. If your opponent gets a quick Archeops, Wobbuffet should give you enough time to evolve a Trubbish into Garbodor. Once a Tool is on Garbodor, you shouldn’t have to worry about Archeops anymore thanks to Garbotoxin. Wobbuffet is also a fantastic non-EX attacker. It can follow up a Turbo Bolt for a KO on just about anything with Psychic Assault. Wobbuffet occasionally can force the dreaded 7th Prize. The final reason for running Wobbuffet is that it is a phenomenal opener, shutting off Abilities from the get-go. This is disruptive for your opponent, but could be unfortunate if you find yourself needing to use Set Up. 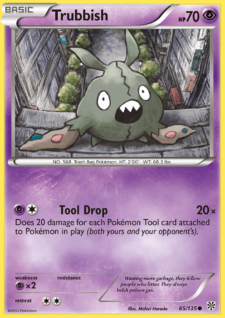 Running the Garbodor from Dragons Exalted is superior to the one from BREAKpoint unless you decide to run Double Colorless Energy. You will never want to commit four Energy to use Offensive Bomb. Garbodor DRX takes less Energy to attack, which can be relevant in the Accelgor matchup.

Since Trubbish’s Tool Drop can OHKO anything in the Accelgor deck, it may end up getting hit with Deck and Cover on the following turn. If Virbank City Gym is not in play (while it very well could be), the Trubbish will survive and become Paralyzed. At this point, you can evolve the Trubbish into Garbodor to cure its paralysis. Then, all you need to do is attach an Energy and use Sludge Bomb, which OHKO’s just about everything in the typical Accelgor deck besides Shaymin-EX and Accelgor itself. Both of those are Pokémon that will likely not be in the Active slot after a Deck and Cover. This situation may not occur, but it is a cute trick nonetheless.

AZ is an AmaZing card that can be circulated around with Battle Compressor and VS Seeker. Having a multipurpose card such as this in your arsenal is not something you want to pass up. It is great for healing damage, healing Special Conditions, and escaping from a Lysandre stall. I use it a lot against Trevenant and Accelgor in particular.

Karen turns the Night March autoloss into an autowin. Night March has had decent showings at past Regionals, so Karen should be included. Not even a skilled Night March player can deal with Karen + M Manectric and Karen + Jolteon-EX. Karen is also a decent recovery option to retrieve discarded Pokémon.

Max Potion is such a powerful card with Manectric. Since Turbo Bolt recovers Energy, you can negate the downside of Max Potion to freely heal the 210-HP beast. Max Potion is incredibly good against any deck that doesn’t OHKO Manectric. Max Potion has the ability to negate entire turns of attacks!

Battle Compressor is one of the most busted cards, and I can appreciate so much more after playing a great deal of the Standard format without it. Even in decks that aren’t Night March, Compressor has tremendous value. On turn 1, I usually use it to toss an Energy and two tech Supporters. Additionally, it can be used at any point to thin your deck of useless cards in various situations.

Parallel City solidifies the Rayquaza matchup and drastically improves the Rainbow Road matchup. It is also convenient to discard your own Hoopa and Shaymin after setting up. This denies Prizes and forces your opponents to slog through three Manectric. The red side is great to use against its respective types, and further beefs up Manectric.

Rough Seas is similar to Max Potion in that is helps against anything that cannot OHKO Manectric. If you have three Megas out, you can cycle between them and heal up to 90 damage per turn. That’s an absurdly strong effect for a Stadium card. Between Parallel and Rough Seas, you should be able to win a Stadium war against most decks. Rough Seas is particularly effective against Trevenant, Accelgor, Toad, Greninja, and Hypnotoxic Laser.

There are many different decks in the Expanded format, so it’s important to be able to handle a wide variety of threats. I’m not going to discuss each matchup extensively, but feel free to ask about anything that isn’t included here.

Wow, look at that! Manectric’s matchups are great. You should beat Yveltal if you draw decent. You can only lose if they draw incredibly well and you draw poorly. For the most part, MegaMan will stomp through Yveltal. Gallade can be countered by Mewtwo-EX and Tool Drop. Against Turbo Dark, the combination of MegaMan, Max Potion, and Jolteon-EX will make short work of it.

As for Trevenant, it just can’t keep up with Manectric. You have enough options to handily beat the deck. The only way you can lose to Trevenant is if Item lock cheeses you into complete dead draws. The same goes for Toad/Bats. These decks simply cannot deal with Manectric.

Greninja is a close matchup. There’s nothing special you have to do against it besides establish Garbodor with a Float Stone. You want to stagger your Tools so that a Tool Scrapper or Megaphone will not take them all out at once. The Raikou matchup is also favorable thanks to Garbodor. Karen is occasionally useful in these matchups to recover Garbodor pieces once they are knocked out or prized.

The Rainbow Road matchup is tight if they play a counter to Jolteon such as Gallade or Xerneas BREAK. You want to establish a Parallel City with Garbodor as soon as possible, and go with the normal gameplan from there. Against other versions, Jolteon-EX can sweep through unchallenged.

Accelgor is favorable. Remember not to evolve your Pokémon unless it is to cure paralysis. Evolving is a valuable escape option from the devastating lock imposed by Deck and Cover. AZ is key in this matchup because it can cure paralysis. Remember that Tool Drop can OHKO anything in the Accelgor deck, and it can get around paralysis by getting knocked out or evolving.

Groudon is unfavorable but surprisingly winnable. You want to start attacking with Turbo Bolt as soon as possible while powering up a big Mewtwo-EX on the Bench along with Wobbuffet. On the turn before you expect the Groudon to start attacking, you may want to play N depending on your opponent’s hand size. This is to prevent a Lysandre KO on Mewtwo, because Mewtwo is important. Then they KO the Manectric.

This article — “The Long Game” – Manectric/Garb, Mega Sceptile, and Carbink BREAK for Expanded Regionals in San Jose — was originally published on SixPrizes.