First of all, thank you to all of you who signed up for my online course on how to draft a basic bodice (sloper). I hope you've received the free pattern that I promised to those of you who signed up from the link on this promotional post made by my dear friend Li-Er over at Ikat Bag. If you haven't received it, please click here and I'll make sure to send it ASAP!

Eminent ways to send money to Ghana
Why It’s Important to Teach Our Kids …
Making a reusable produce bag using a…
Craig Wright Lashes out at Roger Ver,…
I'm in the middle of creating another pattern for the shop which encompasses a lot of testing and re-drafting and re-testing. If you've used my sewing patterns, you'll know that I never include Seam Allowances into the finished *pattern. I have my reasons for that, and before I get into those, let me go back in time a bit... 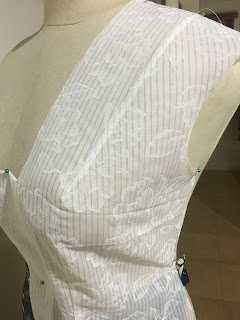 Growing up in Singapore, one did not have easy access to paper sewing patterns from the likes of Butterick, et al. In fact, I didn't even know what a commercial pattern looked like until I was well into my twenties and Spotlight opened its first store in Orchard Point in 1995 (remember that, my fellow Singaporeans?). By that time, I was already drafting and sewing my own clothes but foolishly believed a proper sewing pattern would magically improve my game. I chose and cut a size right off the packet info and made the dress...and never wore it. It was too big (despite what the sizing said), the torso was too long, and the sewing instructions were confusing but I doggedly followed them as best as I could because, you know, I'm a product of my society and era. I tried to alter the dress AFTER finishing it but could not fix the too long torso, not without unpicking most of the dress because it was a sheath. And frankly, I couldn't be bothered after all the frustration and disappointment.
But it was a fantastic lesson learnt.
MUST ALTER THE PATTERN BEFORE CUTTING
(A few other lessons learnt as well but not relevant to this post *wink*)
Fast forward a few more years and a change of careers and I found myself staring at another commercial pattern and becoming frustrated that I had to mentally remove the Seam allowances in order to get an accurate reading of the sized pattern, while also having to take into consideration the added style and wearing ease. Ugh. My frustration was also compounded by the nagging of my subconscious; telling me that I could have drafted the damn thing myself. But this was before I learnt to love drafting OVER sewing. This was during those frenetic days of DOING and FINISHING because leisure time was LIMITED. So my second experience at using a commercial pattern did not go smoothly either. And I wore that jacket only once because, yet again, the fit wasn't great despite applying the vital lesson learnt from the first attempt.
I concede that had I had greater experience in using commercial patterns, I would have been more adept at altering it. Which begs the question: If I have to alter the pattern anyway, if designers know that chances are great that the pattern must be altered to fit the myriad of body types in the real world, why don't they try to make that process easier then?
Which brings me back to why I omit seam allowances in the commercial patterns I create:
1. One less step when measuring and calculating how much to alter the pattern.
The seam allowance is just not there to get in the way of your calculations. There are multiple books and online resources available nowadays on altering a pattern for fit. Some even tell you to physically cut away the seam allowance first then add them back afterwards. Why include them in the first place?
2. You need different seam allowances at different seams for different seam types.
Commercial patterns have a standard seam allowance EVERYWHERE. Usually a whopping 5/8" (1.5cm)! It is so much harder to sew wide seam allowances than narrower ones. Even with a magnetic guide, the cloth wants to slide off the machine bed or bunch into the guide because you are trying to prevent the slippage and therefore over compensate. If you can't increase the foot tension of your machine, this is a common occurrence. Never mind that it is that much harder to sew a neat curve with anything wider than a 3/8" (1cm) seam allowance, which is, in my opinion, still a little tricky but do-able. My recommendation is 1/4" (6mm).
3. Less trimming of seam allowances while in the process of sewing.