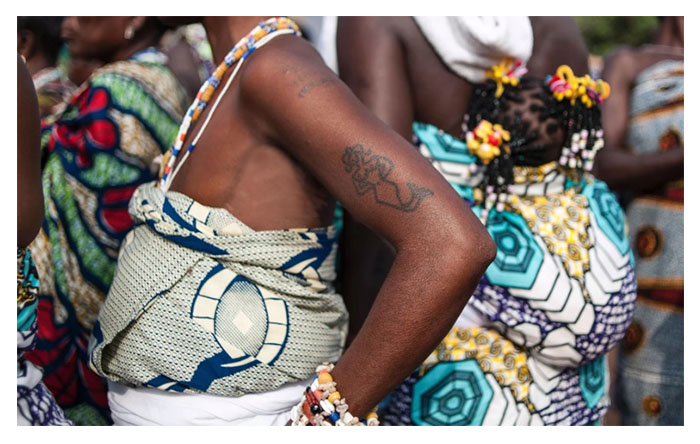 The African deity called Mami Wata, Maame Wata, or Mammy Water in some parts of Western and Eastern Africa; among the Swahili speaking groups, she is called Mamba Munti. Mami Wata is a deity that has existed in Africa for as long as African history and culture can recollect.

The half-fish half-human female water spirit is greatly respected, feared and worshipped presenting a balance between dark, divine, mysterious and angelic existence. Often appearing with the head and torso of a woman and the tail of a fish, Mami Wata straddles earth and water, culture and nature. Colors of Mami Wata are red symbolizing blood and white symbolizing spirituality and beauty; her colors represent Mami Wata’s dual personality.

She may also take the form of a snake charmer, sometimes in combination with her mermaid attributes and sometimes separate from them. She can exist in the form of indigenous African water spirits known as mami watas and papi watas. Mesopotamian myths state that the first great water goddess in the story of the Creation-Flood was known as Mami Aruru.

For women, she is a giver of fertility and protector of women and children. Mami Wata has a soft spot for women who have suffered abuse. The deity is also a provider of wealth and riches to her loyal worshippers and admirers and blesses children with beauty. She is said to have capsized many slave ships that do not make it to their western destinations especially during the abolition of the slave trade.

The role of the strikingly beautiful goddess is to provide spiritual and material healing to her worshippers, while also protecting their emotional and mental health and growth. She is the protector of the water bodies. Mami Wata is the bigger goddess with smaller followers some of which were also men and had the same appearance as their goddess.

The Oppressor and the Oppressed Withi…
Akcent przyciskowy – jak on może prze…
Those who understand Africa understand the cosmos.