And, pretty much as I predicted, I haven't been able to post in almost a month. The last few weeks of college were crazy. I think I mentioned this before, but I signed up for an online internship at a communication agency. Long story short, the customer wasn't happy with the last assignment we did, and we basically had to redo the whole thing. All of this during the last 3 weeks of school, when I also had to do a video presentation for a project. I managed to pull it off, and I finally have some time to come on here and talk all things doll related.
A couple of years ago I used to do lots of doll reviews, mostly because that was the only way I found to bring content to the blog regularly. At some point I got bored by it and didn't think people found them interesting, so I stopped doing them. Now, if I talk about a new doll, I try to add something more to the post, like a new background or a comment on another topic. For this particular doll however, I feel like I have a lot to say, so, disclaimer, this post is going to be very opinionated. 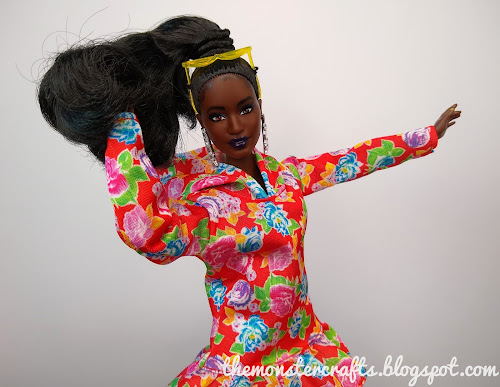 For those of you who don't know, the BMR1959 dolls were released around late October-early November 2019. In case you missed, here's the commercial. When I saw them, I didn't love them. The outfits were too wack for me, and I was quite confused. Much to my surprise, people loved them and thought they were super cool and the fashion looked superb, while I just found it... a bit tacky. Once I got pass the clothes, I found that some of the dolls were pretty, specially this one. At the end of the day, if you don't like the clothes a doll comes with, you can always redress her.
Now, why did it take me so long to get this doll? Since I wasn't super sold on the doll because on the clothing, I wasn't going out of my way trying to find them at any cost. I saw that the price point was 30$ and, in my experience, dolls on that price range tend to cost in Spain around 50€ (55$). I was NOT going to expend 50€ on a doll that I wasn't super sold on. Plus, around a month before, they announced the Chriselle Lim dolls, and I loved those (see them here). They weren't available in Spain at that point, but I was waiting to expend my coins on those, so BMR would have to wait. Much to my surprise, the BMR1959 were sold for 30€ (33$), which is the first time that I see a Mattel collector doll sold at the same price here. That made me a bit more keen on this doll, but was still waiting for the Chriselle Lim ones. Fast-forward a few months, the Chriselle Lim aren't availiable in Spain, neither have I found an European retailer that carries them. It's a bit disappointing, to be honest. However, around a month ago I was scrolling through Amazon and I found this lady for just 22€. It was my chance to finally get her and, finally, here she is. 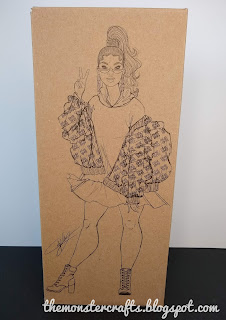 The packaging is actually really cool. It's looks like a shoe box made of what seems recycled cardboard and has this beautiful sketch on the front. The only downside is that you can't see the doll, so you don't know if you're getting the wonky one. Once you open it, the doll comes protected with a tissue paper with the BMR1959 logo all over it. It's a nice detail. 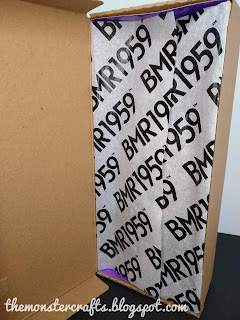 She comes attached to the box like this. Each of the BMR1959 has a different background color, and this particular one is in a beautiful bright purple that I would love to recreate for future photos. 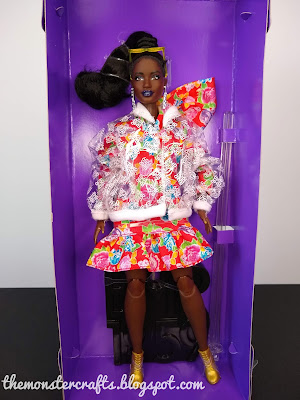 The purple background wasn't attached to the box, so you can slide it out pretty easily and release your doll. Here she is. 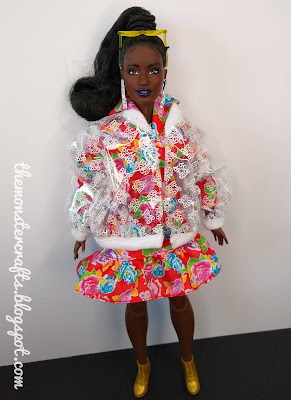 Right of the bat I can tell you that I don't like how the clothes look on her. However, I got her mostly because I love her face. She uses the Pazette sculpt, which hasn't been used very often, and mostly on collector dolls. I don't have a doll that uses this sculpt, so I'm quite happy to add her to my collection. Guess that I'm some sort of "sculpt collector". 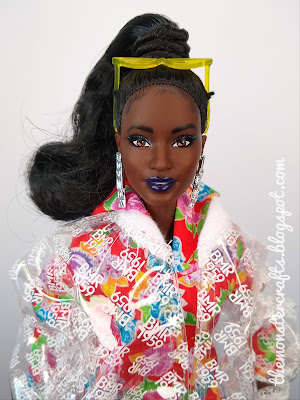 I think she's overall nice, but I can tell that her face paint is not completely symmetrical. I like the dark purplish lipstick, I think it really suits her.
Her hair is up in a ponytail. A section of the hair is twisted and turned around the rubber band. It's a nice hairstyle. She has some baby hair painted on her forehead, which is something Mattel has been doing lately, specially on dolls of color. Her sunglasses are sewn to her hair, something that I will try to remove at some point. 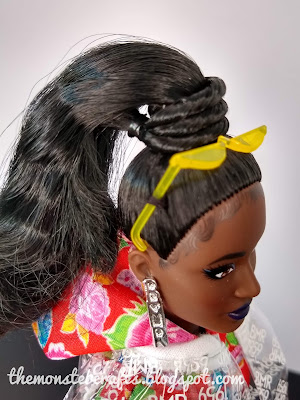 She's wearing silver earrings. One of them has sculpted "BMR" and the other one "1959", but I don't think that comes across well on camera. 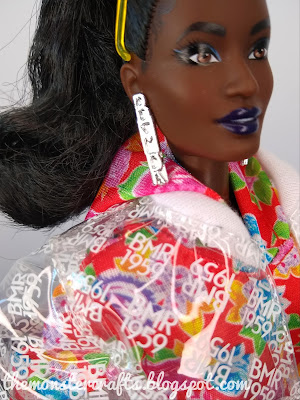 Like I already said, I don't like the clothes. This dolls are said to be 90s inspired, and people that like them say they remind them of the Benetton Barbies from the 90s. Personally, when I first saw them, I didn't get Benetton, I got Barbie meets Supreme. However, I feel like lately there's some 90s influence in fashion, so now I kind of agree. 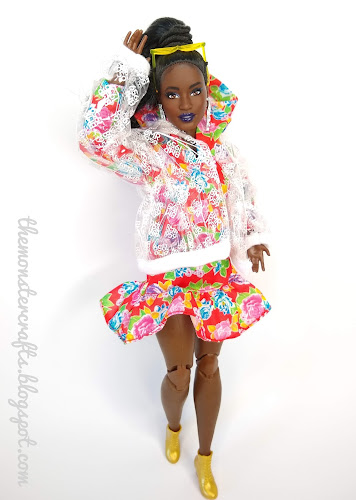 The outer jacket is made of plastic and it's quite stiff, so she can't really pose very well. When I saw the promo pictures, I thought this would be made out of a sheer synthetic fabric. It's a pain to take it off or put it on. It's not very well made either.
At first, I didn't understand what this hoodie dress with grandma's couch fabric was supposed to be. But recently I saw on Instagram a real life version of this and I got it. I don't think this design translates well to doll scale, not everything does. Despite having just called it "grandma's couch", I do like the print, it's colorful. 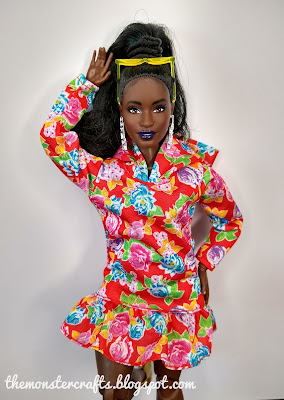 She's also wearing this golden ankle boots. I do like them because they're versatile, but I feel like they clash with the outfit. 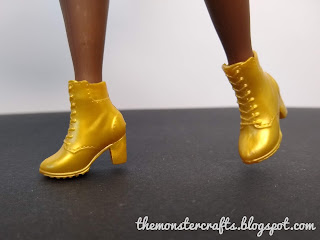 She has the same deep dark skin tone than the purple floral pants Made to Move doll. 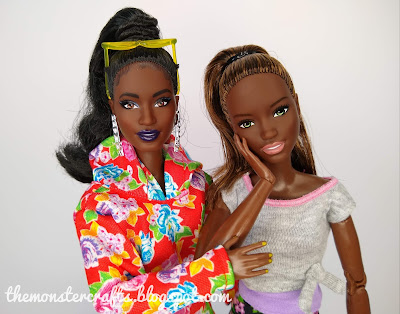 Here's my issue with this line. I do not see this as collector dolls, they look more "deluxe fashionistas". 30€ I think it's a bit pricey for what you're getting, but the 22€ that I've paid is a fair price, considering that she has a made to move body and comes with a stand. The regular made to move dolls started costing around 15-18€, and the Style Luxe dolls from a few years ago costed 20€. Maybe it's just me, but I feel that they're charging more just because these are labeled as collector. I know it's not that big of a price difference, but it's something that bugs me. 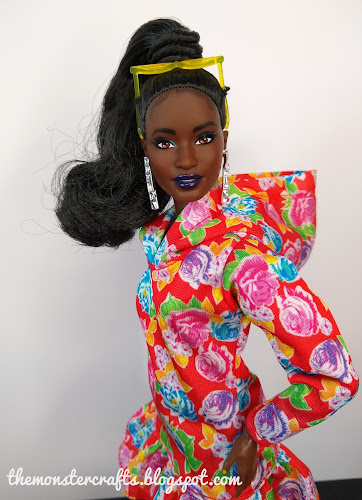 The other thing that I'm concerned about is that we haven't seen any regular Made To Move dolls in a while, so I have a feeling that Mattel has decided to make this type of body a collector thing, more exclusive and hard to find.
Overall, I think this doll is pretty, and I'm happy to have finally bought her and even happier to have bought her at a discount price. I do not like the clothes, but I see that's quite in line with today's trends. Very ASOS, very Supreme. Probably I'm too old to understand this "urban" style (or whatever this is called), or maybe I'm just from a different cultural background that's why I don't get it. However, people seem to love this style, so I wonder if Mattel has considered selling fashion packs with this theme. 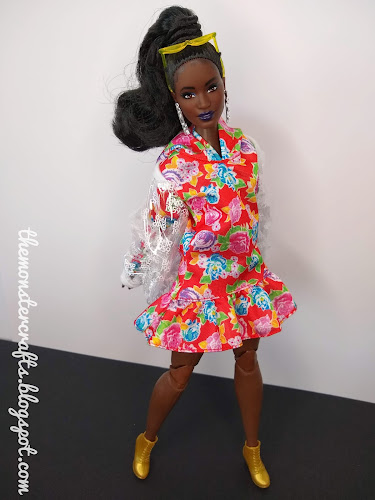 When it comes to the other dolls in the collection, I think they're pretty, and if I had a bigger budget to expend on dolls I would try to get the Kira one. To be honest, if money and space weren't an issue, I would buy every doll under the sun. Unfortunately, since we moved I've cut my budget to expend on dolls a lot, so I'll stick to the ones that I really want. They've recently released a wave 2 from this line, and there's a redhead boy that I find adorable, but so far he's the only one I have an interest in buying.
So what do you guys think? Am I being too picky? Tell me what you think of this doll line in the comment section. I do always pay attention to what you have to say.
Hope you're all doing well and see you soon.
Monster Crafts
PS. She also needs a name, so any suggestions will be welcome.
Let's keep in touch:
Instagram     Facebook     Twitter     Tumblr