Sometimes when you hear that something has never been done, or cannot be done, it makes you even more determined to do it. That's what happened with a project that involved preserving the County records in Cooke County, Texas.

A woman named Darlene decided that she wanted to have records in her county courthouse digitized, indexed, and made available online to help people with their family history. She decided to get a team ready and just do it.

The process
1. Familysearch had been to the county 40 years earlier and had microfilmed many of the records. But there were many more to do. Darlene contacted FamilySearch to see if they would be willing to digitize the records.

Normally the contact is made between FamilySearch and the record repository. We were told by FamilySearch that a project like this had never been done by citizens who were not associated with the repository or with FamilySearch, but they stated that they would send a camera if the county agreed.

2. Darlene started recruiting people at local genealogical societies, churches, and other groups to build a team.

3. Darlene chose a few people that included longtime county residents as well as experienced genealogists to meet with officials at the county courthouse to see if they would agree to have their records digitized and allow our team to do it.

4. I contacted FamilySearch and asked for additional suggestions on what to present to the courthouse officials.

5. I went through the FamilySearch records to see what had already been microfilmed.

7. The team went to the County Commissioners and received approval.

9.  A space was cleared in the county courthouse, and FamilySearch sent a camera.  I housed the camera operator (who was a lovely young woman) in my home for the months that it took to complete the project.

10. Darlene led the digitization project. She recruited her team to carefully prepare the documents for digitizing. The entire project took several months. We are very grateful to the many volunteers who helped preserve these records.

11. While the digitization was continuing Darlene and I contacted FamilySearch and said that we wanted to index the images. We mentioned the records we wanted to do, which included marriages, probates, and deeds. We were told that we may not be able to index some of the records. I assured FamilySearch that we had people who could complete the project and that I would lead the indexing effort.

12. FamilySearch agreed to all of the indexing requests, and I received a phone call today saying that some records were ready for indexing. I was asked when we wanted the records available.  I asked for an email about the records and said, "Please release them tomorrow."

The email arrived within minutes:

So tomorrow these records will be available for anyone in the world to index.  Please join us! What a great way to start the new year!

How to help
To participate in this or any other project at FamilySearch indexing, please go to http://www.familysearch.org/indexing/ and create an account if you don't already have one. Sign in, then click Web Indexing.

In the "My Batches" section, click the Open Batch button next to Guided Tour--Introduction to Indexing. 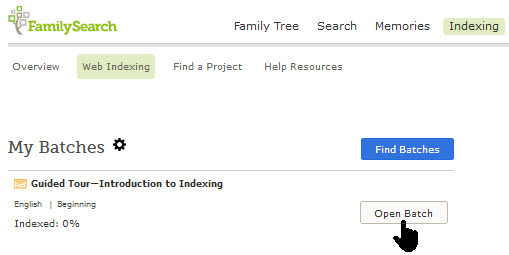 When you are ready to index, click the blue Find Batches button:

You will see the following screen. 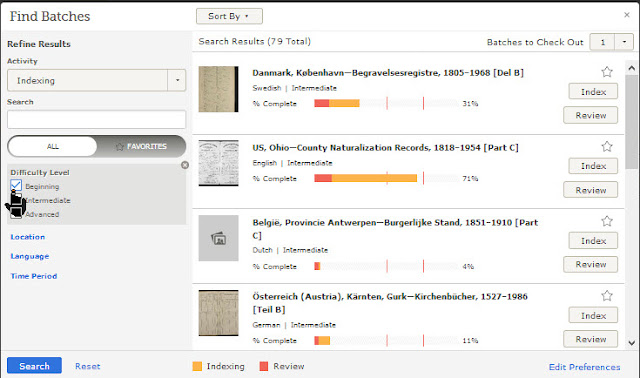 You can select one of the projects you see or you can specify a difficulty level, location, language, or time period. If you are new to indexing, you might want to start with a beginning difficulty level. The Cooke County, Texas, land and probate records will NOT be a beginning level project.

You don't have to be specific when searching by location.  Below we entered "texas" to find any projects relating to Texas. Until the Cooke County records are released tomorrow, there are currently no Texas projects. 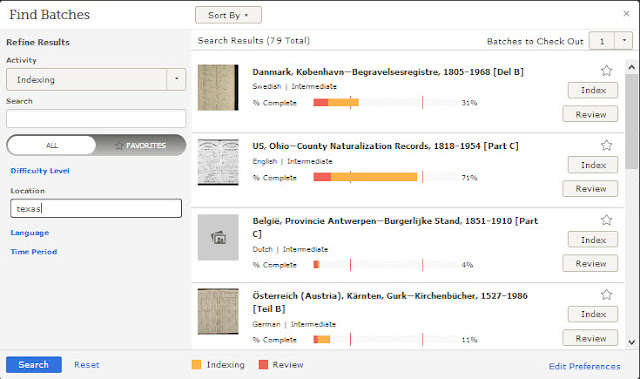 You can index any project of your choice, and you don't have to be perfect. All indexing is reviewed before it is finalized, and nobody can tell who did the indexing.

If you are good at reading handwriting, please help us with the Cooke County, Texas records.

There will be many more records to index in the near future, and we greatly appreciate the efforts of anyone who wants to help.

We are starting a new year. Think about what you would like to see that will help you and future generations find their family history.

If you would like to preserve your local records, listen to the interview with Steve Waters from FamilySearch at the website below. The interview starts at about the 10:45 minute position:

Go for it! Together we can all leave a lasting legacy for future generations.

This post first appeared on The Ultimate Family Historians, please read the originial post: here
People also like
A Furry’s Guide to Cryptocurrency
Why the BigCommerce and Walmart Partnership Is a Big Deal
Music Profile: Elliott Waits For No One - Alternative Rock Band - Illinois, Usa | SRL Networks London Music PR
In search of light on the edge of Ireland
MICRO BUSINESSES
The Eight Wives of Henry VI society (EWH6)
A Pre-Christmas Christmas Card