I have been seeing many questions regarding changes to Family Tree DNA's Big Y results or the inability to access them. Here we will see why some people cannot access results, why others may be frustrated at their new results, and what we can do to understand what we have so far.
I will be referring to my brother's Big Y test results as "my" results.
Background to Big Y testing


Let's review a little about how the Big Y test is processed. As you may remember, your DNA consists of two strands of DNA coiled into a double helix. The strands run in opposite directions.  One is called the forward strand, and the other is the reverse strand. The strands are connected by base pairs (bp) which are the As, Cs, Gs, and Ts that form your DNA sequence. All of these can be numbered to show their position on the chromosome.

Eating In Dreams. What Does It Mean?
It’s Me – Chapter 8
Types of Kisses to Spice Up Your Sex …
Top 10 Sites to watch Telugu Movies O…
Spider-Man: If This Be My Destiny - L… 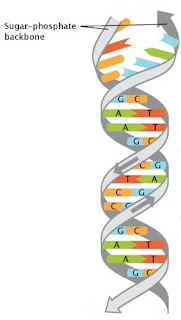 During the testing process, your DNA is not read in one continuous stretch. Instead, your DNA is broken into random fragments. The test then reads these fragments from each end. Some fragments are read many more times than others. For example, one of your fragments may have been read two times, and another 56 times. Unfortunately, not all of the reads may give the same result. So a fragment that was read consistently many times will be reported as a high quality SNP, while one read a few times with different results will be considered to be a much less reliable SNP.

After all the fragments are read, they must be reassembled, mapped to the human genome Reference Sequence, and given a precise location. Differences between your DNA results and the reference sequence are then reported.


What happened to my Big Y results?
When  FTDNA began the conversion process, all haplogroup designations were rolled back to what they were before Big Y testing.  In the image below my results are at the bottom with Cairns and another Thompson. Before the Big Y, I had tested the single SNP R-DF13, and Cairns and the other Thompson had tested positive for R-FGC11134.

For the past several weeks, Family Tree DNA has been remapping all Big Y results to the most recent human genome reference sequence, hg38. This means that many of the SNP position numbers have changed. FTDNA is also adding a new Y-chromosome Browser and a new matching system.
The remapping to hg38 will lead to more accurate identification of SNPs and even the discovery of new SNPs. The Y-chromosome browser will show more information about the test results, and the new matching system will lead to more accurate matches.

We will examine new SNP discoveries and the new Y-chromosome browser. We will not look at the new matching system because not all Big Y tests have been converted.

In the previous version of the Big Y results page, there were three tabs: Known SNPs, Novel Variants, and Matching. Your novel variants are newly-discovered SNPs that have not yet been seen by Family Tree DNA in any other tester. Family Tree DNA doesn't name SNPs until they are shared, so these novel variants are identified by their position number on the Y-chromosome.

In the former Big Y version I had three novel variants. The position numbers were based on the old hg19 human reference sequence.

Not all Big Y tests have been converted
My Big Y conversion is now complete. My haplogroup designation has changed, but the haplogroups for Kits N116392 and 34484 have not.  Since all three of us have ordered the Big Y, their results have not been completed, and they will not yet show up on my list of matches.

New SNP discoveries in Big Y Tests
On the new Big Y results page, the tab names have changed.  Instead of Known SNPs and Novel Variants, they are now called Named Variants and Unnamed Variants. The named variants are shared with others; the unnamed variants are, so far, unique to you.

When I click the Unnamed Variants tab, I can see the new Y-chromosome browser at the top. I now have six unnamed or novel variants instead of three as shown in the previous report. The position numbers have all changed. These position numbers are based on the hg38 human reference sequence: 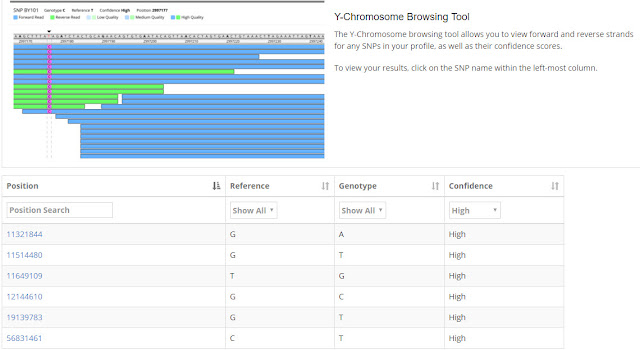 The above screen states that position 56831461 was formerly called position 58977608. It was read 53 times in my Big Y test. 34 times I had a T reported for this position, and 19 times I had a C reported (which is the ancestral position). Therefore, this SNP was rejected by all analysts.
If this position had been identified as a valid SNP by YFull, I would have been able to see it in their chromosome browser where it would have had 53 segments aligned--34 segments would have had Ts, and 19 would have had Gs.  The chromosome browser would have appeared similar to the image below.  Here the cursor is pointing to a position that had been read seven times; six of them showed an A in this position, and one showed a C. 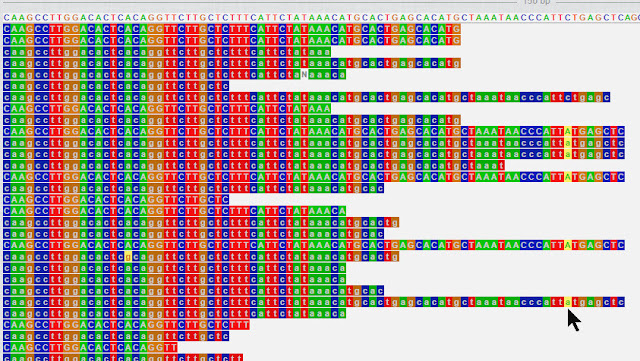 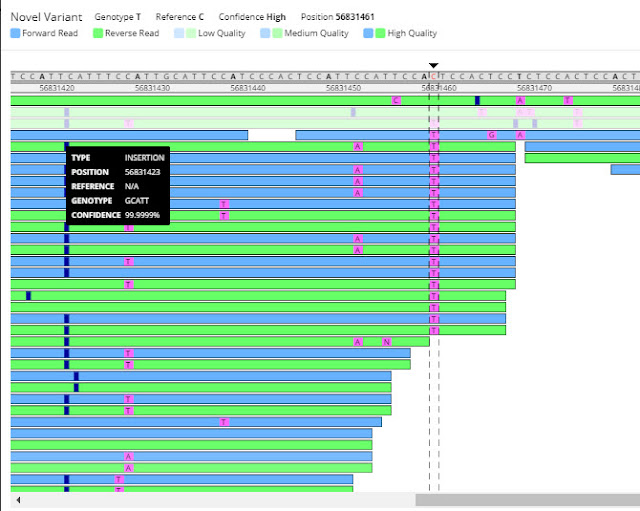 Perhaps some of the previous segments were more correctly mapped to a different location. We do not yet have access to the new BAM files, so we can't compare these results to the old BAM files to see why these changes occurred.
In FTDNA's new Y-chromosome browser the forward and reverse strands are color-coded. Notice also that in this browser image at position 56831423 the calls are identified with a blue color and no letter. If you click on the blue column you can see that this column is not a change from one base to another. These are insertions that appear in my sequence.
SNP may not be novel at all
If I look at position 56831461 at YBrowse.org, I see that it has been given two previous SNP names. This agrees with the FGC report that this SNP had been seen twice. 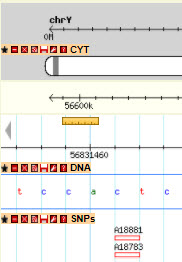 So this SNP may not be truly novel, but is only a new SNP in the FTDNA database.
How can we verify that any new SNPs are genuine?
Using the new Big Y chromosome browser for Named Variants
In the Named Variants table, the SNPs are listed in alphabetical order. In the image below the first SNP is A1207. 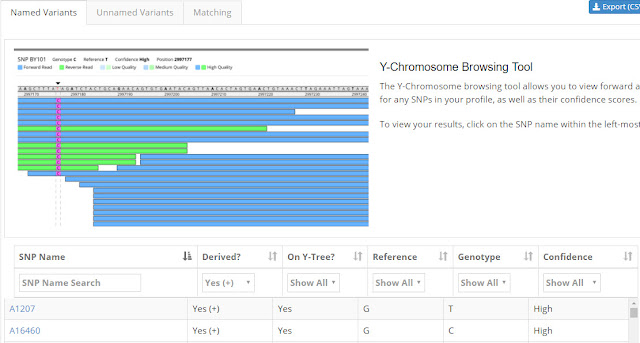 The Reference Column contains the ancestral value from the hg38 Human Genome Reference Sequence. The Genotype column shows my derived value.
If you click on the name of any SNP, you will be taken to the Y-chromosome browser. I clicked on A1207:

SNP A1207 is shown at position 10631919. When I click anywhere in that column a black reference box will appear to the right of the column. This box tells me that at position 10631919 the reference sequence has a G, and I have a T. It does not tell me how many times this position was read, but we can count down the column to find out. Move the scroll bar at the bottom of the chromosome browser all the way to the right to access the vertical scroll bar.

You can also zoom out in your Internet browser to see all segments at once.

We can count the number of segments in the column for Position 10631919. According to the chromosome browser this position was read 34 times, and all reads showed a T in my results.
"Derived" vs "Mismatch"
It appears in the above chromosome browser that I have several SNPs in the same short region. I can click on any of these locations in the browser to get more information.  But if I click in the column for position 10631929 (ten positions to the right of 10631919), I notice that the Type does not say "Derived"; it says "Mismatch".

The only column that has the notation "Derived" is the column for position 10631919. It is also the only column for which we can determine the SNP name (A1207).
What does "Mismatch" mean?  Looking at the browser, position 10631929 sure looks like a genuine SNP, but that position is not on my list of Unnamed Variants.  So if it's a real SNP, it must be in my list of Named Variants.  Unfortunately, the chromosome browser only has the position numbers, and the Named Variants table only has the SNP names.
I wish all the tools were in one location so that this was not such a cumbersome process, but we currently need to use multiple tools for our evaluations. I can use YBrowse.org to look up known SNPs and find out more about them. YBrowse indicates that position 10631929 has been named BY23083. 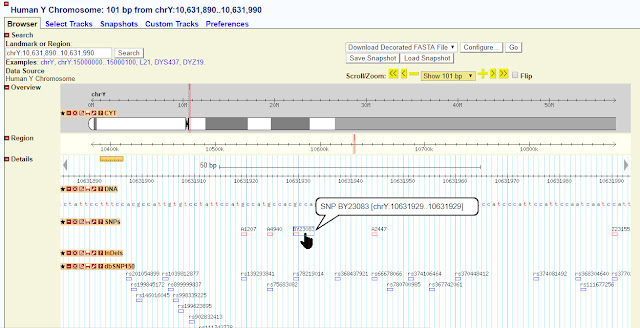 This SNP immediately shows up in my list of Named Variants:

If I click that SNP name, I will be taken back to the Y-chomosome browser. Clicking anywhere in the 10631929 column, we see that now the Type is Derived instead of Mismatch. 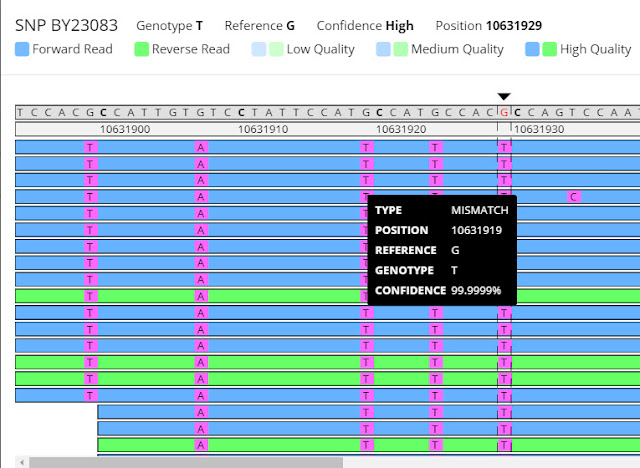 As we can see from the above browser images, only the SNP that is named at the top of the each browser screen will be listed as "Derived." All others on that screen will be listed as "Mismatch."
Evaluation of New Big Y results
It is still too early to tell the full impact of the Big Y conversion because we can't yet compare all of the people who match us, and we don't have access to the BAM files. The SNP names, hg38 position numbers, and hg19 position numbers are not fully cross-referenced, so understanding the recent changes can be frustrating.
But this change has huge potential. We should soon be discovering new SNPs, learning more about them, and finding more accurate matches. We won't see any changes to the current system until after all the results are processed, but we can make a few recommendations at a time.
Suggested improvements to Big Y Results
Although we will have many suggestions in the near future, here are a few that can make the current results easier to use.
Unnamed Variants table:
Named Variants table:
Y-chromosome browser:
Family Tree DNA has stated its commitment to making our results easier to evaluate.  I look forward to seeing how much we will soon learn!