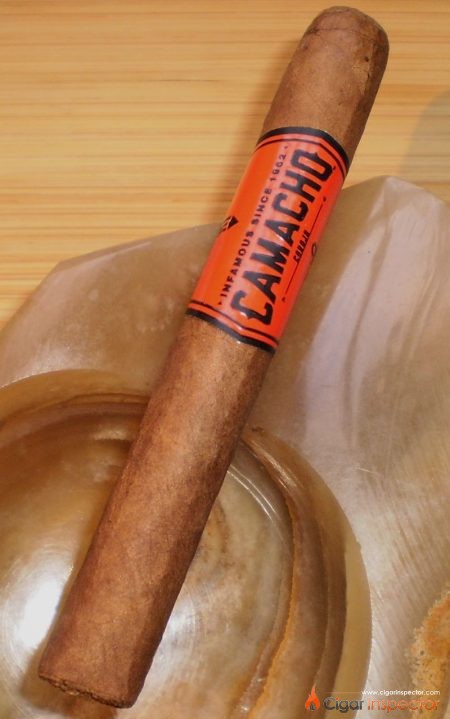 The Camacho Corojo Machito is a small, fully long-filler, hand-rolled Honduran cigar, offering rich Flavour and great value for the modest price, if not quite the depth of more expensive sticks.

The brand takes its name from Simon Camacho, the company's 1960s founder. 'Corojo' is the name of a legendary Cuban tobacco wrapper leaf, no longer cultivated there in its 'pure' form due to disease vulnerability, the Corojo-seed leaves in Honduras being the defining tobacco of this all-Honduran cigar.

'Machito' is the term used by Camacho for these petit panetelas, a word often meaning 'riding high' or 'well-placed'. Typically sold in tins of 6 cigars, the Davidoff stores - Camacho is now a part of Oettinger-Davidoff - sometimes also sell these Machitos individually.

The cigar as a whole seems slightly thicker than its official 32 ring gauge, comparing more with the 33-34 ring gauge cigars in my humidor. Wrapper is smooth and pleasant to the touch, tho with some quite different colour patches affecting the appearance, especially once that too-wide cigar band is slipped off.

Pre-draw after punching is delightful, with spice & sweet citrus, tho I am surprised afterwards in that there is not so much spice in actually smoking the stick.

With lighting, lots of flavour is immediately on the scene, giving the sense that this cigar is a great bargain. Citrus with nuts and a wood fire in the first few minutes, then just mostly sweet citrus and the woodiness, with an occasional touch of a barbecue flavour. Draw is great, tho the first half burns a bit too quickly, reversing the usual image of Corojos as rather burn-resistant.

The middle third begins with glorious flavour richness and a sense of a full-bodied cigar, belying the slender ring gauge. This is the real sweet spot of the cigar, which alas burns away too quickly. As the mid-point of the cigar begins, the flavour shifts to a somewhat darker tone, bitter tho not unpleasant, as if one is tasting the pits of fruit, or the walnut shell instead of the walnut.

That bitter-but-ok tone fades as the final third begins, and now a pleasant nutty flavour begins to dominate, a little bit of the citrus fruitiness also nudging in now and then.

Remained quite good getting down to the nub, but I couldn't resist cutting it open to verify this really was a long-filler cigar, and indeed it was, lovely wrapped filler leaves there to be seen.

Ash was a nice grayish white, holding for a half-inch or so, ok for a slender cigar like this.

A very nice short smoke for the price, lots of flavour and interest thru the smoke. But in some ways this small Machito hit me as a bit of a candy-store cigar, lots of flavour there, maybe not the depth I would find in more sophisticated (& expensive) smokes. The Camacho Corojo did not seem particularly strong in this small package, it's a good way to get introduced to this rich flavour palette.

It's common for cigar makers now to offer their shortest cigar like this as a panetela, but my thought is somewhat the opposite ... do a 4 to 4.5 inch cigar as a short corona, and then do a 5 or 5.5 inch panetela as well as a longer corona ... a 34 to 38 ring panetela thickness is a great way to have a longer but lighter smoke, and a very elegant cigar appearance-wise, whilst short sticks satisfy more if a little thicker.