Caught: Why Business Schools Might Lie to Improve Rankings

School rankings from sites like Forbes or U.S. News & World Report are often a crucial factor for students before they decide where they should pursue a degree. Using a combination of rankings, standardized test scores, job placement after graduation, and tuition costs, among other crucial factors, a school ranking a quick and succinct look at the relative merits and weaknesses of MBA programs throughout the country—and the world.

There is a lot riding on these rankings: not only do perspective MBAs often make decisions about where to pursue their degree based on these reviews, but graduates can use these rankings to demonstrate the quality of their degree to future employers. With such high stakes, organizations like U.S. News that compile these rankings rely on the accurate reporting of data from each business school.

So, what happens if the information is inaccurate, or worse? Data like student satisfaction and post-graduate salary—which can be so crucial in informing a prospective MBAs choice of school or program—is reported directly from the business schools, which often presents a conflict of interest potential. With so much at stake, would a school ever lie to increase their spot in the ranking?

Unfortunately, it seems the answer is yes. Just last week, the Online MBA program at Temple University’s Fox School of Business—a program that was consistently ranked in the top spot in U.S. News’ Online MBA ranking—vanished from the list. According to the initial announcement, new information had revealed that just 20 percent of Fox students in the Online MBA program had actually submitted test scores, a number that had initially been reported at a perfect 100 percent. Since the formula used by U.S. News weighs test score averages more if over 75 percent of students have submitted them, this inaccurate reporting from Temple Fox would have given the program an undeserved boost in the school ranking. 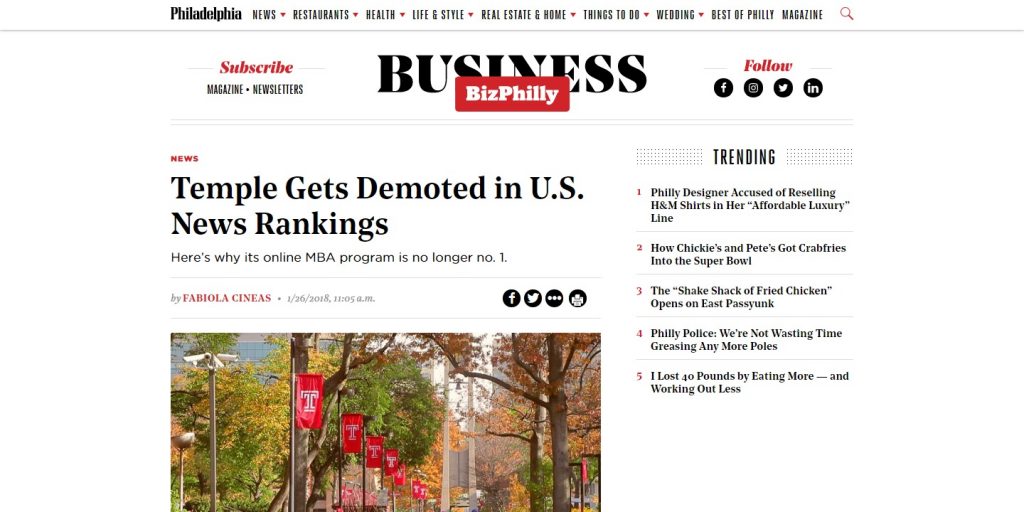 In the wake of Temple’s removal, questions continue to arise about the lengths schools go for good rankings/Photo via PhillyMag.

In the days since the initial announcement of Temple’s removal from the ranking, even more questions came out regarding the accuracy of Fox’s data. Further investigation found that Temple had reported 100 percent of students taking standardized admissions test for every year since 2014—a suspicious jump from the 25 and 33 percent that had been reported in the years prior. Since the test scores data submitted turned out to be inaccurate, it seems wholly possible that the data had also been misreported for the three years prior; the same years that Temple Fox held the top ranking for Online MBA programs.

This isn’t the first time it’s been discovered that business schools and even undergraduate programs have falsified or reported inaccurate data to boost its rankings. In 2013, Forbes was forced to remove four schools from its ranking of “America’s Best Colleges” due to inaccurate reporting: doctored SAT results from Bucknell University, false acceptance and graduation rates from Iona College, among others. In 2012, George Washington University lost its ranking on U.S. News’ “Best Colleges” list when it was discovered they were inflating the high school grades of their incoming students.

GWU was one of several schools in the past few years to submit false data for a rankings boost/via Huffington Post.

The problem may be even more far-reaching than some may suspect. In 2013, a survey of 576 college admissions officers found that 91 percent believed other colleges to be guilty of falsely reporting their admissions data. Even the school ranking creators themselves are shocked by this trend. In 2013, U.S. News editor Brian Kelly commented, “The integrity of data is important to everybody … I find it incredible to contemplate that institutions based on ethical behavior would be doing this.”

In 2005, the Association to Advance Collegiate School of Business (AACSB) took a deep look into this trend to examine why the issue of falsifying business school data might be so widespread. “Because rankings of full-time MBA programs are commonly presented under the label of ‘best b-schools,’ the public has developed a narrow definition about the breadth and value of business education,” the report states. Since most media rankings don’t consider factors like faculty research or doctoral education, MBA programs have become more likely to invest in more visible aspects of the program, such as facilities and marketing campaigns, which don’t actually deal with the quality of the degree. As a result, even high-quality programs may earn a lower media rank than they deserve based on the factors considered, adding pressure to do what it takes to earn a school ranking that matches what they perceive as the quality of the degree.

“Plenty of people apply to a school because it has reached the summit of a ‘best-of’ ranking, just as many people will see a movie or buy a book after it wins an award. That’s human nature,”  Columbia Business School dean Glenn Hubbard told Fortune. “We want to experience the best.”

Whether or not placement in a school ranking truly represents the quality of a degree, it’s easy to see why the pressure is on for many admissions departments. A better school ranking can increase the number of applicants, providing for a more competitive, and diverse applicant pool, which creates a better quality admitted class. The cycle continues: success of these graduates can improve the possibility of future funding, providing more resources for the program and encouraging even more applicants to apply down the line.

“Rankings have become omnipresent in higher education, and they have enhanced the competition among institutions,” said Terry W. Hartle, senior vice president at the American Council on Education, in 2013. “And in any highly competitive environment, there is always a temptation to cut corners.”

For now, the Fox School of Business has been removed from the U.S. News Online MBA ranking. Concerns about false data continue to be evaluated, as organizations like AACSB continue to seek solutions and make recommendations for best practices when it comes to the collection and reporting of admissions data. In 2017, the AACSB publication “On Academic Rankings, Unacceptable Methods, and the Social Obligations of Business Schools,” suggested that schools and organizing bodies work together to find a method of data collection that includes “transparency, interpretability, and the empowerment of individual decision makers by whatever criteria truly suits their individual needs.”

For prospective students, its important to acknowledge this troubling but widespread trend as they make important decisions about where to earn a degree. While school ranking remains an easy way to compare programs against each other, students should consider not just the accuracy of the data but also the kind of factors reported in media rankings. While it seems possible that the number one program in a media ranking may not truly deserve that position, the real top program- the best for each individual’s needs and career goals—will always deserve first place.

Caught: Why Business Schools Might Lie to Improve Rankings