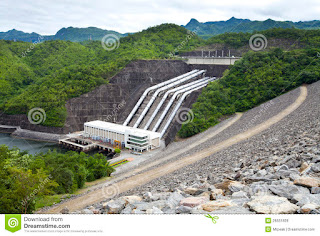 Introduction
Hydroelectric Power Plants convert energy available from flowing water into electricity. These power stations are suitable where water resources with sufficient head are available. When water is allowed to flow from the high elevation to a lower elevation, potential energy is transformed into kinetic energy, which is converted into electrical energy by the hydroelectric power plants.

The hydroelectric power plants can be divided into:
Dam or Reservoir

Stops the river's flow and forms a reservoir. The reservoir stores water during rainy seasons. It also helps to maintain a steady water head for the turbine to operate. The water level of the reservoir is called head race.

Tunnel is used to transport water from the reservoir to the generating station. It is normally made of RCC (Reinforced Cement Concrete).
Penstock


A penstock is a conduit that takes the water from the reservoir to the powerhouse. It is usually made of steel and is suitable for carrying water at medium to high pressure. For low-pressure penstocks, RCC pipes are also used.

This is a facility to start or stop the water flow into the powerhouse for normal operation and for maintenance.
Surge tank

Surge tank is a small additional storage facility near the powerhouse. When the distance is more, non-uniform water intake to the powerhouse results in water hammering. The surge tank takes the sudden increase of pressure by allowing the water into it, when the water flow is stopped or reduced. Thus the surge tank functions as a pressure regulator in the water line.
Powerhouse

نباتات الظل المتسلقة وطرق العناية بها
You Say Covid-19, I Say Hangar 18!
Everybody wants me, so when do I self…
Q&A with Phil Yates: Shaping the Futu…
Exhibit D: Lipstick and rifles--Ukra…