January 6th 2016
View original
Generation and distribution of electrical energy is generally treated as a service to the people and at the same time it is a commercial activity.

As a general practice, the total cost of energy generation is accounted in two parts - fixed cost and running cost. Fixed cost includes the overhead due to the installation a part maintenance cost, salary to permanent employees, etc. The running cost depends on the units of energy generated. It includes cost of fuel, a part of maintenance cost, etc.

There are certain parameters, which describe the size and utility of the power system.
It is the sum of power ratings of all the electrical equipment connected to the system. 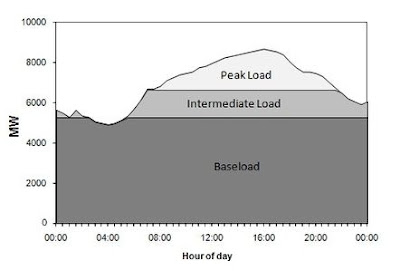 It is the highest demand of power in a system during a selected period of time. Maximum demand is usually stated in kW or MW.
In practice, maximum demand taken as the average load over a designated interval of time, say half hour. The average demand is measured for every half an hour interval and highest value out of that is taken as the maximum demand.
Demand factor is the ratio of maximum demand to connected load.
Maximum demand
Demand factor = ————————
Connected load
For a generating station, the average load is given by the following expression.
Energy (kWh) generated
Average load = ———————————
Total hours
It is the ratio of the number of units of electricity actually generated during a period to the number of units that could be generated if the generation is throughout at the maximum demand. Load factor is given by the following expression.
Energy produced during a given period
Load factor = ——————————————
Max Demand x Hours of operation
Load factor is also expressed as:
Average load
Load factor =—————-———
Maximum demand
It is also possible to relate the load factor with the load curve shown in the figure. The area below the load curve (shaded portion) represents the energy produced during the period, whereas the area of the rectangle ABCD is equal to the product of maximum demand and the hours of operation.
Diversity factor indicates how diverse the occurrence of maximum demands of individual consumers is. It is the ratio of sum of maximum demands of the individual consumers to the maximum demand of the system.
Sum of consumers' maximum demands
Diversity factor = ———————————
Maximum demand on the system
Plant capacity factor is a measure of the utilisation of the power plant's capacity.
Actual energy generated
Plant capacity factor =  ——————————
Maximum energy that could be generated
It is the ratio of the actual energy generated during a period to the energy that could be generated at the full capacity of the power plant, whenever plant was in operation.
Actual energy generated
Plant use factor = ————————————
Plant capacity x hrs of operation
Some generating capacity should be maintained as standby in the system to meet any increase in power demand. In general we can define the reserve capacity as the installed capacity available above the demand. Depending on the amount and nature of the expected increase, there are different types of reserves as follows.
Cold reserve: This is the generating capacity, which is available for service hut not in operation. Generators on cold reserve will be started only when there is a demand.
Hot reserve: The generating capacity, which is in operation but not in-service. Generators on hot reserve will be running but not connected to the grid.
Spinning reserve: The generating capacity, which is in operation and connected to the grid and is ready to take load. Spinning reserve is maintained to meet any unpredictable sudden increase in load.