1.DEFINITION :The characters that are physically expressed in one sex only are called Sex Limited Traits. But both the sexes contain genes.

Sex Limited genes are active in presence of hormones.

These are autosomal traits. The secondary sexual characters like beared in male Human Beings. The beard controlling gene is active in presence of androgens (male hormones ). In Female human beings, beard is absent due to the absence of androgens.

Milk secretion genes are present in both the sexes. But Milk is secreted from female mammals only.

Egg laying genes are present in both the sexes of birds. But Egg Laying is by female birds only.

When '5' Liters Milk giving cow was crossed with a bull, the female progeny produced gave '8'litres of milk per day. The progeny tells us that the dominant '8' liters milk giving gene is inherited from bull. But never bull gives milk. 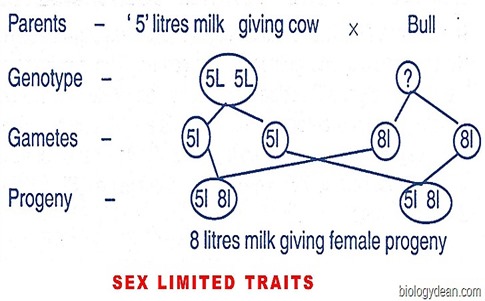