The characters in an organism are controlled by genes. The genes lie in chromosomes. Each chromosome contains one molecule of hereditary material called D.N.A. So, the Gene contains a part of D.N.A. Every biochemical reaction needs an enzyme. The enzymes are the proteins and are synthesized on ribosomes. All the enzymes information lies in D.N.A.

Empire of Language- Prelude-Metaphors…
8 Places to Drink Coffee in KC that …
Can CBD oil be addictive?
تشغيل برامج الايفون على الكمبيوتر
A Soundtrack for the Right Track 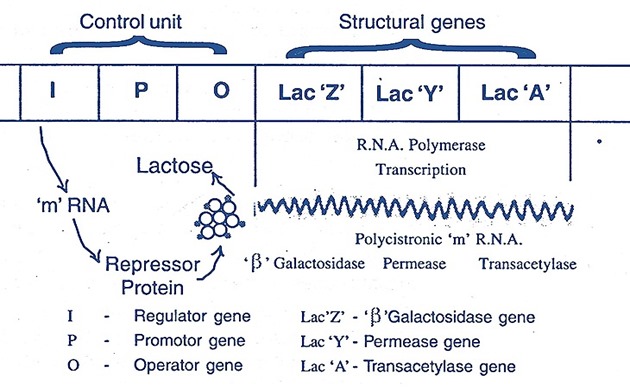 The process of transmission of information from gene or D.N.A. and the synthesis of protein according to the information together called Gene Expression.

Garrod first observed that some diseases in the human beings are due to the absence of some enzymes. In the healthy normal human beings, all the required enzymes are synthesized. Due to mutation insome genes, some required enzymes are not synthesized. Hence diseases will occur. Garrod observed alkaptoneuria and phenylketoneuria in some humans. These diseases are caused due to gene mutations. Hence Garrod stated as one mutant gene-one metabolic block.

Later Beadle and Tatum did many experiments on fungus, Neurospora. They said that one enzyme synthesis is under the control of one gene. So, they replaced the one mutant gene - one metabolic block as one gene - one enzyme concept.

Ingram observed the synthesis of haemoglobin. It contains '4' polypeptide chains. Each is controled by one gene. Ingram proposed as one gene - one polypeptide concept.

Viruses are intracellular obligatory parasites. They cannot multiply on their own. The viruses need host machinery (enzymes, ribosomes) for their essential products. The genetic material in the viruses is D.N.A. or R.N.A.The viruses that infect bacteria are called bacteriophages.

i. Gene expression in bacteriophages:

The bacteriophages gene expression is of two types. They are lytic cycle and lysogenic cycle.

T4 is the large bacteriophage. It contains D.N.A. T4 infects bacterium, E.coli.The D.N.A. of T4 is injected into the bacterium through the hole created in the membrane of bacterium. The D.N.A. of T4 uses the machinery of bacterium for its transcription and multiplication. After many phage particles are formed, the

D. N.A. of phage synthesizes the enzyme, lysozyme. This enzyme dissolves the membrane of bacterium. Hence many phages are released. This is known as the lytic cycle.

Phage Y (Lamda) is another virus. It contains D.N.A. It infects E.coli. The D.N.A. of Phage X is attached to the D.N.A. of host chromosome. Hence the D.N.A of Phage is also transcribed along with host D.N.A. The phenomenon by which the phage D.N.A. exists as a part of the host D.N.A. is known as lysogeny.

The retroviruses contain genetic material R.N.A. These are
hepatitis - B virus, HIV (Human Immuno Defeciency virus or AIDS Virus) etc. Normally the gene expression is unidirectional. It is

B. GENE EXPRESSION IN EUKARYOTES

The sequence of Amino Acids in a protein is determined by the sequence of nitrogenous bases in the D.N.A. Protein synthesis occurs on ribosomes. It consists of two steps. They are transcription and translation.

Formation of 'm' R.N.A. from a strand of D.N.A. is called transcription.

The transfer of information from D.N.A. to 'm' R.N.A. is also called transcription. 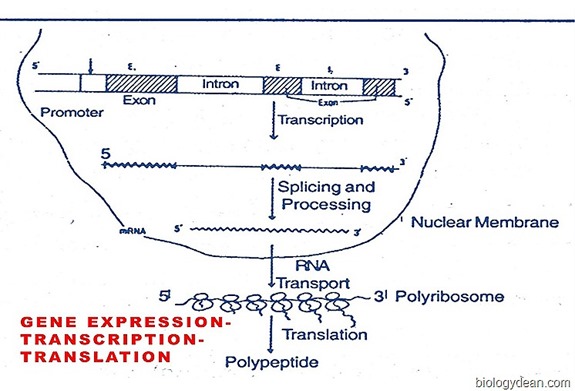 RNA formed on template DNA is called HnRNA (heterogenous nuclear RNA). This RNA contains wanted and unwanted parts. The wanted parts (codons) are called exons and unwanted parts are called introns. The introns are removed by splicing enzymes. This process is called splicing. The exons are joined serially. This process is called processing or Sizing. Now the RNA is called messenger RNA. It passes through the nuclear pore into the cytoplasm. The 'm' RNA is now attached to the ribosomes. The'm' RNA transfers the information from DNA to the ribosomes.

The three continuous nitrogenous bases present on'm' RNA forms a codon for aminoacid. There are sixty four codons for 20 aminoacids. Each codon is complementary to the three continuous nitrogenous bases of D.N.A. Among 64 codons, 3 are non-sense codons (UAA, UAG, UGA). These are termination codons also. The remaining 61 codons are for 20 amino acids. So, some amino acids have more than one codon.

The synthesis of proteins according to the information present on'm' RNA is called translation.