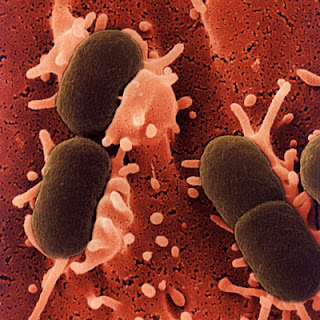 Search for signs of Ancient Microbial life in the geological record is challenging due to degradation of the primary organic material. Therefore, proof of biogenic origin often relies on chemical signatures that microorganisms leave behind. A new study of minerals in rock cracks presents chemical signatures that are definite proofs of widespread ancient life processes in the energy-poor continental crust. More importantly, the study greatly expands the known chemical variation of sulfur, one of the key elements in microbial metabolisms. This gives new clues to what type of chemical signatures to expect from life in extreme environments, including search for life on other planets.

A major part of the biologic activity on Earth is hidden underneath the soil down to depths of several kilometres in an environment coined the “deep biosphere”. Studies of life-forms in this dark anoxic system have implications for how life has evolved under conditions we consider extreme. It also gives clue to how life may have evolved on other planets where hostile conditions inhibit colonization of the surface environment. The knowledge about ancient life in this environment deep under our feet is still extremely scarce.
Search for signs of ancient life on Earth in the geological record is often challenging because the primary organic material has been partially or completely degraded. In these situations, the proof of biogenic origin relies on geochemical signatures that microorganisms leave behind, or to morphological shapes of mineralized microbial remnants. In search for life on other planets, such as on Mars, the same challenges can be expected and it is therefore important to know what type of chemical signatures to expect from life in extreme environments.
In numerous cracks down to depths of 1700 meter that have been partly sealed by crystals grown in them, a team of researchers led by Dr. Henrik Drake from Linnaeus University, Sweden, has traced ancient microbial processes, dominantly focusing on microbes that transform sulfate to sulfide in their metabolism. The multi-disciplinary approach included micro-scale measurement and imaging of sulfur coupled with geochronology within minerals formed in response to microbial activity at several Swedish granitic rock sites. This is the most extensive study of this process in the continental crust yet and the findings suggest that the process has been widespread in time and space in the bedrock.
Henrik Drake explains how they tapped the chemical archive of minerals to decipher ancient microbial processes:
“It is well known from other environments that when microorganisms use sulfate in their metabolism they produce minerals that have characteristic sulfur composition. In fact, relative abundance of different sulfur atoms (isotopes) is among the most widely used geochemical tools to trace microbial processes in the geological record. Our micro-analyses within crystals of the sulfide mineral pyrite showed the most extreme sulfur isotope composition ever recorded on Earth.”

“These signatures are definite proofs of ancient life processes in the continental crust, but more importantly they greatly expand the known isotope variation of sulfide minerals produced following microbial metabolisms. In more detail, the span of the ratio of sulfur isotopes 34S to 32S was as large as -54 to +132 per mil (normalized to the CDT standard). Adaptation to energy poor conditions, slow metabolism and complete exhaustion of the available dissolved sulfate as it moved through the fracture system are explanations for the exceptional values.”
Christine Heim of University of Göttingen, Germany, a co-author of the study, says:
“In addition to the isotope signatures we found biomarkers of ancient organic remains of surficial origin (e.g. land plants) preserved within the mineral coatings at great depth. A connection to the surface biosphere is thereby evident and may explain why the marks of microbial activity abruptly disappear at around 1000 m depth.”

Direct timing constraints facilitated by newly developed dating techniques revealed when the biologic activities started - at 360-400 Million years ago. Deep life in the energy-poor continental crust has evidently thrived over eons, which is relevant information when searching for life in similar subsurface settings of other planets. Henrik Drake summarizes:
“Our multi-method approach has made us aware that biological signatures in extreme environments can be different from what we expected earlier, and would thus be very suitable for investigation of extra-terrestrial environments.”
Co-author Martin Whitehouse of The Swedish Museum of Natural History adds:
“The ability to rapidly measure sulfur isotopes at high spatial resolution by ion microprobe permits a better appreciation of both the range and distribution within single pyrite crystals. It is intriguing that our previous studies of the same fracture system found the most variable carbon isotope compositions in carbonate minerals yet recorded on Earth. We can therefore conclude that our exploration of ancient life in cracks of terrestrial magmatic rocks will change the way we look at geochemical proxies for microbial activity in extreme environments.”
The results are presented in the article “Unprecedented 34S-enrichment of pyrite formed following microbial sulfate reduction in fractured crystalline rocks” in the journal Geobiology (published online June 26, 2018).
https://onlinelibrary.wiley.com/doi/abs/10.1111/gbi.12297