Impactful Tributes on a 'Conscience-keeper of our Times' 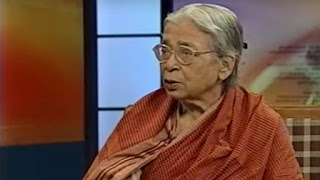 Of all the tributes, encomiums and homages in honour of an illustrious writer and a legend rightfully called the ‘Conscience-keeper of our Times’, – Mahasweta Devi, three stand apart –

one by Gopalkrishna Gandhi, [writer, thinker, and grandson of Mahatma Gandhi],

the other by Gayatri Spivak, [the doyenne of Postcolonial Studies, who has translated many of Devi’s works],

and the third by Ganesh Devy, [Tribal Activist, founder director of the Bhasha Research and Publication Center, Vadodara and Adivasi Academy at Tejgadh, Gujarat], whose association with her lasted more than 18 years.

Spivak’s glorious tribute – ‘a combination of force and charm’ gives a beautiful pen portrait of the life and times of Mahasweta Devi, - on her best piece of writing, on her best character portrait, on her influences, on her tribal characters as “too much the noble savage”, about Mahasweta - the personality, etc, etc.

To us at MCC, this tribute has an added sense of interest, when Spivak says, “She [Devi] took me to Baroda — where she worked with Ganesh Devy’s project in Tejgadh and created public awareness of the history of the tribes that had been notified as “criminal” by the British in 1871”.

[Aside: Well, Ganesh Devy was our Invited Speaker for the TG Narayan Endowment Series, hosted by the Department of English, MCC, on 16 December 2013, where he specifically mentioned this incident, on meeting up with Mahasweta Devi and Spivak, who had come all the way to meet up with him, to know more about the work that he is doing among the Tribals, etc.]

Gopalkrishna Gandhi’s tribute to this ‘literary gadfly rather than a butterfly’, delves into issues close to her heart, and how he “was a recalcitrant recruit in her work for tribals, and for those who are generally down and out!”

Connecting her [rather than comparing her] with other writers, he says: “Mahasweta was Hannah Arendt’s kindred spirit. She was Nadine Gordimer’s soulmate.”

Gopalkrishna Gandhi signs off by extolling Mahasweta’s works as befitting a Nobel Laureate’s: “Had Mahasweta written in a language that used the Roman script, she would have gotten the Nobel Prize for Literature years ago, perhaps after her Aranyer Adhikar (1977). And the citation would have called her literature the literature of protest. But she is better off having used the scripts of India, understanding and interpreting them as only Hajar Churashir Ma could have done”.

[Aside: But unlike Ngugi wa Thiong’o the Kenyan writer, who renounced working in English and now working in Gikuyu, Mahasweta Devi did not take a resolve of not writing in English, but opted writing in a tongue that she could call her own, a tongue which would – in the words of Chinua Achebe, ‘bear the burden of her own cultural experience’.]

Therein lies the ‘aura of authenticity’ in Mahaweta Devi’s oeuvre!

Dr. Ganesh Devy’s heartfelt tribute to Mahasweta Devi is soulistic, and comes from the heart! He recollects how, “some 15 years ago, they travelled across Maharashtra meeting adivasis as part of their campaign for the rights of denotified and nomadic tribes”, and how, “she has a strange ability to communicate with the silenced, her best speech reserved for those to whom no one has spoken.” He is able to delve deep into the personality that Mahsweta is, without mincing words. “There was something strange about her ability to use the spoken word. Often she addressed audiences outside Bengal in Hindi. Yet, she managed to mesmerise audiences!”

“She combined humility and an unbreakable determination, simplicity of words and complexity of ideas, leaving those who listened to her completely changed. I know so many individuals whose lives were shaped by just a few words coming from Mahasweta Devi”. He continues: “Even as she developed the practice of spending a week or ten days in Baroda with my wife and me, we realised how difficult her life had been and still was. For instance, even at the age of 75, Mahasweta Devi did not have a house of her own. She continued to stay in rented accommodation near the Ballygunj station and had to climb a flight of winding stairs to get into her flat!” He signs off by lamenting the ‘glaring vacuum that has been created, especially during these critical times’, by eulogizing on “that wonderful sense of humour, that fondness for song, that touching innocence which went into the making of a great literary phenomenon” – Mahasweta Devi – a legend! In fact, Ganesh Devy goes a step ahead and showers encomiums on her, calling her, ‘the Conscience-keeper of our Times!’

Indeed, to me, on a personal note, although all three tributes highlight certain unique aspects of Mahasweta Devi, and throw light on hitherto unknown but interesting features of her life and works...

Yet of the three, I find Ganesh Devy’s far more appealing in letter and in spirit!

Tree Pose, Mythology and an Infographic

Learn about the Culture of Manali, Himachal Pradesh

Impactful Tributes on a 'Conscience-keeper of our Times'