'We can find ourselves as creatures of excellence and intelligence and skill. We can be free! We can learn to fly!'

Richard Bach’s sensational and inspirational read titled, Jonathan Livingston Seagull, is high-renowned for its impactful sway through every word and every line of its captivating pages!

And one is sure gonna affirm with elegance, the beauty of the epigraphic lines of Ernest K. Gann, to Jonathan Livingston Seagull!

‘This book is a new and valuable citizen in that very wondrous world ruled by St. Exupery ... I suspect all of us who visit the worlds of Jonathan Seagull will never want to return.’

He’s said it so true! Who will ever want to return after reading through Jo Li Sea!?

It’s much akin to the Keastian world of the Nightingale!

Such is the spell! Of Jo Li Sea, the Seagull!

Quite interestingly, Booker T. Washington’s 1901 autobiography titled, Up from Slavery flits you by, time and again, each time you flip through each and every page of this delightful inspirational!

In fact, Up from Slavery proves one of the best inspirational reads the world has ever read!

Jonathan Livingston Seagull (Jo Li Sea for short) by Richard Bach is an equally inspiring read! But instead of a human being, there’s a seagull!

Again, chances are, you might also get a tinge of Tolstoy’s Kholstomer gently breezing you by, when you are way way into Jo Li Sea!

Well then, Jonathan Livingston Seagull is a seagull! A seagull who’s quite disillusioned with his daily drudge of a mundane routine quarrelling for food! With a zeal burning bright within him for flying, for soaring higher, he pushes himself to the core, just to learn everything there is to flying!

Because of his refusal to fall victim to the unreasonable and highly insane diktats of his society, he is expelled from his own flock! 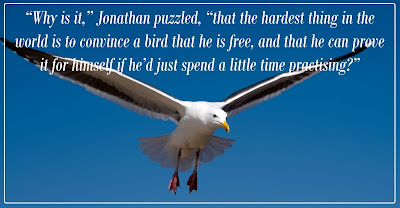 Jo Li Sea is now on outcast, all alone! All to himself!

Now, in this solitary-mode, left all to himself, Jo Li Sea continues more passionately on his quest, ardently, and more vigorously, to learn! Soon, Jo Li Sea is mightily pleased with his own talents and abilities, that in turn help him to lead such a happy life filled with immense joy and peace!

Now, Jo Li Sea finds out for himself that, his longing, his desire and his inquisitiveness to learn, have made him a ‘one-in-a-million-bird’!

Quite sooner, however, Jo Li Sea decides to return to Earth to tell others of his own society, his own flock, ilk and folk, about the beautiful things he had learnt from above, to lighten others with his love for flight! His noble mission soon succeeds well enough, and in no time, Jo Li Sea gathers around himself a flock of other gulls of the same weather, who’d also been outlawed by ‘their flock’ for their refusal to conform!

Therein starts a wonderful transformation! And how!

The rest is for you, dear and gentle reader, to read for yourself!

This is a beautiful little fable of a novella, which you should read a minimum of er…um… a hundred times at least!

Lesser than that would be a kinda injustice to Jo Li Sea and his noble thoughts! ;-)

The Bach-ian descriptions are so arresting! They have that majestic sweep to their tempo and pace, that takes you spontaneously from one line to the next with such elegance!

The very opening page to the novel takes us to Jo Li Sea out there among the clouds, in the deep blue skies, on ‘practice-mode!’ with ‘fierce concentration’!

What a beautiful lesson for us all!

Way off alone, out by himself beyond boat and shore, Jonathan Livingston Seagull was practising. A hundred feet in the sky he lowered his webbed feet, lifted his beak, and strained to hold a painful hard twisting curve through his wings. The curve meant that he would fly slowly, and now he slowed until the wind was a whisper in his face, until the ocean stood still beneath him. He narrowed his eyes in fierce concentration… Then his feathers ruffled, he stalled and fell.

Seagulls, as you know, never falter, never stall. To stall in the air is for them disgrace and it is dishonour.

And the next paragraph charts out the difference between Jo Li Sea and the others of his flock!

Most gulls don’t bother to learn more than the simplest facts of flight — how to get from shore to food and back again. For most gulls, it is not flying that matters, but eating. For this gull, though, it was not eating that mattered, but flight. More than anything else, Jonathan Livingston Seagull loved to fly. 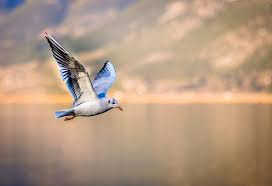 While for the rest, it was a life of drudgery, humdrum existence, to Jo Li Sea, it was something else! He loved to fly!!!

Since he felt a voice within him saying again and again, that he was, ‘Born to Fly!’

Even his Mom and Dad are unhappy with his passion and zeal for flying!

“Why, Jon, why?” his mother asked. “Why is it so hard to be like the rest of the flock, Jon? Why can’t you leave low flying to the pelicans, the albatross? Why don’t you eat? Jon, you’re bone and feathers!”

His father being more practical and sagacious in his exhortations to his son! Says the father –

“See here, Jonathan,” said his father, not unkindly. “Winter isn’t far away. Boats will be few, and the surface fish will be swimming deep. If you must study, then study food, and how to get it. This flying business is all very well, but you can’t eat a glide, you know. Don’t you forget that the reason you fly is to eat.”

Jonathan nodded obediently. For the next few days he tried to behave like the other gulls; he really tried, screeching and fighting with the flock around the piers and fishing boats, diving on scraps of fish and bread. But he couldn’t make it work.

It’s all so pointless, he thought, deliberately dropping a hard-won anchovy to a hungry old gull chasing him. I could be spending all this time learning to fly. There’s so much to learn!

Indeed! This last line, this last blessed line, ‘There’s so much to learn’, was his mantra that whispered within his ears, gently, all of the time!

There’s so much to learn, and that’s hence I wish to fly, says Jo Li Sea!

When there’s so much to learn, why pray, should be bogged down in puddles and muddles of your own volition and choosing!

It’s high time you came out quick from all things that bog you down!

And make sure you come out quick from those miry clays of yore, that bog you down!

Because you are born to fly! And yes! You’ve got so much to learn! Ain’t you dear reader!!!???

Some of the quotes to Jo Li Sea are of the high-octane variety! Giving you a glimpse into a few of them –

How much more there is now to living! Instead of our drab slogging forth and back to the fishing boats, there’s a reason to life! We can lift ourselves out of ignorance, we can find ourselves as creatures of excellence and intelligence and skill. We can be free! We can learn to fly!

This line is too too good! Here goes –

Jonathan Seagull spent the rest of his days alone, but he flew way out beyond the Far Cliffs. His one sorrow was not solitude, it was that other gulls refused to believe the glory of flight that awaited them; they refused to open their eyes and see.

How trueee! Alley! ‘They refused to open their eyes and see!’ Sounds a catchy line to a lovely poem or a book!

[Jo] learned to fly, and was not sorry for the price that he had paid. Jonathan Seagull discovered that boredom and fear and anger are the reasons that a gull’s life is so short, and with these gone from his thought, he lived a long fine life indeed.

To be convinced that you are born to fly, you need friends of the same flock! Who believe in themselves! Who believe in making their burdens lighter! Who believe in shunning like a plague getting into all santhu bondhu groups, like a rat enters a burrow, or like a groundhog enters a hedgerow, and after that, give that thiru thiru look, not knowing how to wriggle out of these miry burrows!

How important it is to have like-minded friends! Who don’t believe in this burrow-system!

Here were gulls who thought as he thought. For each of them, the most important thing in living was to reach out and touch perfection in that which they most loved to do, and that was to fly. They were magnificent birds, all of them, and they spent hour after hour every day practising flight, testing advanced aeronautics.

“Forget about faith!” Chiang said it time and again. “You didn’t need faith to fly, you needed to understand flying. This is just the same. Now try again ...”

Then one day Jonathan, standing on the shore, closing his eyes, concentrating, all in a flash knew what Chiang had been telling him. “Why, that’s true! I am a perfect, unlimited gull!” He felt a great shock of joy!

By sunrise there were nearly a thousand birds standing outside the circle of students, looking curiously at Maynard. They didn’t care whether they were seen or not, and they listened, trying to understand Jonathan Seagull.

He spoke of very simple things — that it is right for a gull to fly, that freedom is the very nature of his being, that whatever stands against that freedom must be set aside, be it ritual or superstition or limitation in any form.

“Set aside,” came a voice from the multitude, “even if it be the Law of the Flock?”
“The only true law is that which leads to freedom,” Jonathan said. “There is no other.”

“Why is it,” Jonathan puzzled, “that the hardest thing in the world is to convince a bird that he is free, and that he can prove it for himself if he’d just spend a little time practicing”?
Why should that be so hard?”
Fletcher still blinked from the change of scene. “What did you just do? How did we get here?”
“You did say you wanted to be out of the mob, didn’t you?”
“Yes! But how did you ...”
“Like everything else, Fletcher. Practice.”

And the last line is such sweet motivation for all of us teachers in this noble vocation of imparting sound learning to our kids!

And though he tried to look properly severe for his students, Fletcher Seagull suddenly saw them all as they really were, just for a moment, and he more than liked, he loved what it was he saw. No limits, Jonathan? he thought, and he smiled. His race to learn had begun.

How beautiful! How lovely!

'We can find ourselves as creatures of excellence and intelligence and skill. We can be free! We can learn to fly!'