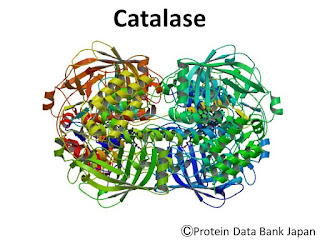 Catalase, or hydroperoxidase, is an intracellular Enzyme found in most organisms. This protein is found in the peroxisomes, glyoxisomes (plant peroxisome) and in the cytoplasm of prokaryotes. Catalase is an oxidoreductase, since it uses hydrogen peroxide (H2O2)both as an acceptor of electrons and as an electronic donor, decomposing it accordingly to this chemical reaction: 2H2O2 → 2H2O + O2.Although there are various known forms of this enzyme, it is commonly found in the form of a tetramer of 240 kDa, having four polypeptide chains in a quaternary structure. Each polypeptide chain binds a heme group that has an iron ion, which reacts with the hydrogen peroxide, decomposing the molecule. However, there are also some non-heme catalases, that is, instead of havin heme groups, they have one binuclear manganese center.
The toxic H2O2 is a product of the metabolism of our cells, produced, for example, during the peroxisomal β-oxidation of fatty acids, which requires a rapid conversion of it into a chemical species that is harmless the organism. Catalase has the highest known turnover number (kcat): the enzymes is able to decompose 40000000 H2O2 molecules per second! Catalase is also important for certain invading microorganisms, which is used as a defense system against some cells of our immune system whose action rely in the production of H2O2 as an antibacterial agent. Finally, this enzyme is associated with delayed aging mechanism connected to oxidative stress.
The reaction catalyzed by this enzyme is a dismutation reaction, i.e., the substrate acts as both reductant and oxidant agent. It is known that it occurs in two basic steps: H2O2 + Fe (III)-E → H2O + O = Fe (IV)-E and H2O2 + O = Fe (IV)-E → H2O + Fe (III)-E + O2.

Bitbay to Break Relations with Monero…
12 tips to Overcome Frustration and A…
No sleep for you: I tossed and turned…
Bed Bugs Bites: What Do Bed Bug Bites…
Why Buy A Novelty Diploma?
Fe-E represents the iron ion of the heme group, bound to the enzyme. Catalase is also capable of catalyzing the oxidation of other molecules such as formaldehyde, formic acid and certain alcohols. H2O2 + H2R → 2H2O + R, where R is the oxidized form of the molecule that undergoes the reaction. Metal ions (especially copper (II) and iron (II)) are non-competitive inhibitors, and cyanide and curare behave as competitive inhibitors.
Catalase is used also used in the textile industry to remove H2O2 from the tissues, and in some contact lens cleaning products, acting as an antibacterial agent. Currently, it has also been used in beauty masks, combining the enzyme with H2O2 to increase cellular oxygenation of the upper layers of the epidermis.
The so-called Catalase Test is used in microbiology and consists in the detection of catalase in bacteria, serving essentially to distinguish staphylococci and streptococci. In this test, peroxide is put in contact with a liquid microorganism culture to be tested if it appears bubbles (oxygen); if so, the organism is catalase-positive (has catalase if staphylococci), otherwise, it is designated catalase-negative (streptococci).
Text written by:
Ana Araújo
Inês Oliveira
Mariana Pires
José Cardoso
.