Remaining unruffled under all circumstances, known as the nature of dollarization

Similarly to other nations Georgians would also claim that Georgian Lari (GEL) stands as a symbol of sovereignty. However, in nowadays world of globalization, national currencies are undergoing the process of weakening. Even though, some policies have been implemented to prevent this process. Not surprisingly, since 1970-s the US Dollar has been taking over national currencies. In last several decades, it played the role of a big brother, who was coming for help, implementing own rules and at the same time gaining the trust of the single member of the society. As Georgia is involved in the ongoing processes around the world, it wouldn’t have stayed as an exception and the process of dollarization has been the topic of discussion among Georgian “Economic Elite” since it was influencing the country’s economy.

The Friday Roundup – Originality, You…
64 Awesome Things to Do in Costa Rica…
Thinking on whether or not you should…
8 Steps You Can Take to Empower Your …
How to Soften a Beard: 6 Effective Ti…
Accurate statistics on how much people hold in foreign bonds, bank deposits, or notes and coins are usually unavailable. However, estimates of the extent to which notes of the U.S. dollar and a few other currencies circulate outside their countries of origin give a rough idea of how widespread unofficial dollarization is. Researchers at the Federal Reserve System estimate that foreigners hold from 55 to 70 percent of U.S. dollar notes, mainly as $100 bills (Porter and Judson 1996, p. 899).
To prove above mentioned, let’s have a look at the following bar chart, representing official foreign exchange reserves by Currency, where obviously, the highest proportion comes on US Dollar, followed by euro. 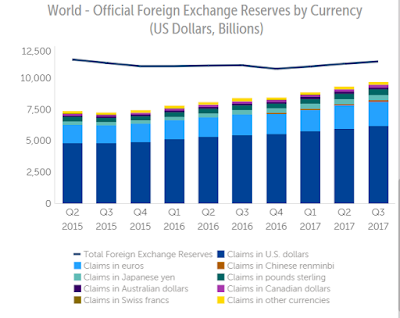 Source: International Monetary Fund http://data.imf.org
Let’s describe an example of Georgia. There are several factors that cause the high level of dollarization in this country. Above mentioned trust is one of the issues because according to some historical facts Georgian Lari has lost its trust from the population. Which was followed by political instability, high rate of inflation and country’s overall economic situation itself. The following graph depicts the information about exchange rates of three most influential currencies on Georgian economy. While exchange rate with Russian ruble remained almost stable, US Dollar/Gel and Euro/Gel were undergoing fluctuations. 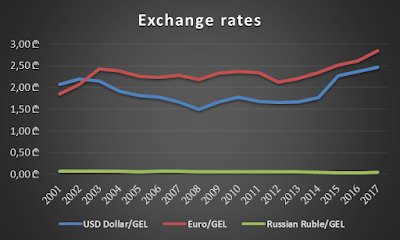 Data taken from NBG of Georgia: https://www.nbg.gov.ge/index.php?m=304
According to the dollarization classification, Georgia can be considered as an unofficially dollarized country, as people hold much of their financial wealth in foreign assets even though the foreign currency is not legal tender. The term "unofficial dollarization" covers both cases were holding foreign assets is legal and cases where it is illegal. In some countries, it is legal to hold some kinds of foreign assets, such as dollar accounts with a domestic bank, but illegal to hold other kinds of foreign assets, such as bank accounts abroad, unless special permission has been granted.[1]
Another way to measure unofficial dollarization is by the proportion of foreign-currency (67% of USD Dollar) deposits in the domestic banking system. 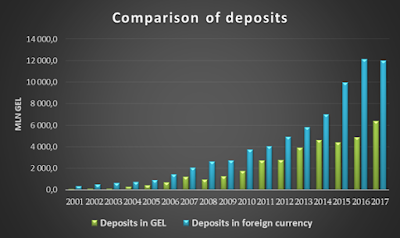 Data taken from NBG of Georgia: https://www.nbg.gov.ge/index.php?m=304
As it can be seen on the diagram, since 2001 the deposits in foreign currency has outweighed deposits in domestic currency and this difference has been increasing continuously. According to the recent statistics, the dollarization of the bank deposits is accounted for 67%.
Factors influencing dollarization process
Risk and return considerations as they provide the basics of the allocation of financial savings between US Dollar and domestic currency deposits. US Dollar deposits can become an attractive form of saving for domestic investors, assuming confiscation risks are minimal.[2]
Another main factor is an institutional one, which defines the main rules of the “game”, for example: allowing individuals to have deposits in foreign currency or even treatment the dollar deposits in reserve requirements.
The existence of the US dollar deposits to some extent has facilitated the development of the Georgian financial system, however, it has been developing further, in tandem with the trade liberalization and capital account which determine currency substitution equation. Eventually, financial instability and lack of confidence of the local currency provokes a significant shift from Lari, that at the same time puts pressure on the exchange rate and banking system.
Expansion of loans in foreign currency
In Georgia, real estate trade is now dollar based, which for Georgian financial system comes at a cost. The expansion of loans in foreign currency imposes currency depreciation risk. 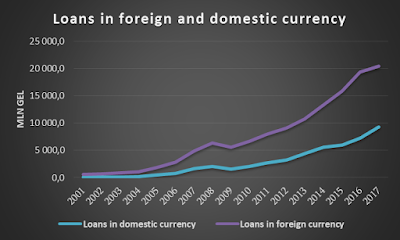 Data taken from NBG of Georgia: https://www.nbg.gov.ge/index.php?m=304
Furthermore, in tandem with other vulnerable currencies, Georgian Lari keeps depreciating against US dollar at the rate of the dollar to the Gel being 2.475. The depreciation of the domestic currency has a negative impact on the financial well-being of local producers, those who have loans in US dollars. To define the process itself:  producers receive domestic currency through the realization of their product but have to pay back their debt in foreign currency. The depreciation of the domestic currency makes the repayment of the loan in US dollars very expensive, as they need to convert more GEL into US dollar, all of this is increasing the possibility of loan defaults which makes financial position both producers and banks more vulnerable.
Macroeconomic volatility
If inflation volatility is higher than the volatility of the nominal depreciation of the exchange rate, then, it can be accounted as one of the causes of dollarization.
“Developing nations overleverage their economies to external foreign debt, most often, the US dollar, due to an optimistic perception of global monetary stability and low, long-term interest rates,” states Will Hickey.[3]
The gross External Debt of Georgia amounted to 15.7 billion USD (38.3 Billion Gel) 108,3% of the last four quarters of GDP. Overall, External Debt of Georgia increased from 16416.51 USD Million to 16712.72 USD Million in the second and the third quarter of 2017 respectively. External Debt in Georgia averaged 11285.93 USD Million from 2007 until 2017, reaching an all-time high of 16712.72 USD Million in the third quarter of 2017 and a record low of 4175.11 USD Million in the first quarter of 2007.
The relationship between external debt and economic growth of Georgia is inverse. Locally it can improve financial being of the country but in long term, it comes to the opposite. To clear up my opinion I would turn to one example: Let’s imagine this situation on the model of a family. Imagine family decided to repair their house and gets debt from the bank. They did the full renovation of their house and improved their physical environment. The logical question that has to be asked here is following: did this action improve their financial well-being as well? Hopefully, your answer crosses mine, because in future they need to pay the interest rate and cover the whole debt itself and looking around to the depreciating exchange rate and economic volatility we would say that the “family” shouldn’t ruin future self. Similar flew of processes is visible in the story of Georgian external debt and economic growth.
The external debt slows down economic growth as the servicing fee of external debt needs to be paid in foreign currency, and comparing Georgian  GEL to the currencies of creditors its quite weak. However, economists with the more positive interpretation would claim that it is possible to utilize external debt in such manner that it will add value to the economy.
As this article claims, a large number of factors influence the level of dollarization in the country. It depends on trade balances, inflation rates, investor confidence, political stability, and reserve currency status.  Economists, politicians, researchers, business leaders continuously monitor the factors that determine the level of dollarization in the country and later on, they measure or give their evaluation to the “nature of dollarization”. However, to sum up, this article I would share with you the statement made by US Treasury Secretary John Connally in 1971 to other finance ministers – “The dollar may be our currency, but it's your problem” – which holds true today.
[1] "Basics of Dollarization" By Kurt Schuler. January 2000
[2] “Georgia: Recent Economic Developments and Selected Issues” IMF 2001
[3] Will Hickey is the author of Energy and Human Resource Development in Developing Countries: Towards Effective Localization, Macmillan, 2017.


This post first appeared on Quantitative Economic Students', please read the originial post: here
People also like
The Friday Roundup – Originality, YouTube Editing and 3 Point Lighting
64 Awesome Things to Do in Costa Rica, Where to Stay, Know Before You Go
Thinking on whether or not you should get into crypto? Read this!
8 Steps You Can Take to Empower Your Workforce
How to Soften a Beard: 6 Effective Tips & Methods
Save Cost And Time With This Guide On Hiring Graphic Designers

Remaining unruffled under all circumstances, known as the nature of dollarization