Can You Find The "T" In This Image? 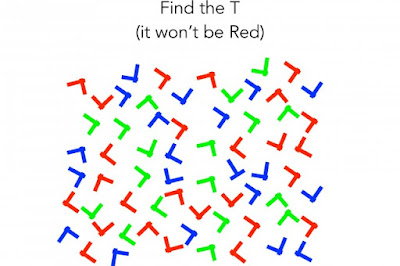 Mastering the art of ignoring is very useful, especially when it comes to visually searching for things, according to a new Study from Johns Hopkins University.
It's obvious that clues and information on what you're searching for can make the task of finding something a lot easier. However, a team of psychologists wanted to prove that hints on what not to look for can be just as helpful in visually taxing tasks.


In two experiments, participants were asked to find certain letters on a computer screen. They had to search for a “B” or an “F” among a mess of other letters in assorted colors. Sometimes, the participants were told the “B” or “F” would not be a certain color, while other times they were given no such hints.
Those who weren’t given color clues usually performed less successfully than when they were provided with a hint. After around 100 rounds of this game, the participants showed they were able to find the letter significantly faster if they were constantly given just one color to ignore over the course of the experiment. The more they performed the experiment in this way, the faster they were able to find the letter.
In the video below, you can try out the experiment for yourself.
The experiment may sound fairly obvious, but their research suggests that the brain has the power to actively suppress certain stimuli. Furthermore, we also have the capacity to fine-tune this ability and master it.
Howard Egeth, a professor of Psychological and Brain Sciences at Johns Hopkins, explained in a statement: “Attention is usually thought of as something that enhances the processing of important objects in the world.
“This study, along with some recent work in which we measured brain activity while subjects responded selectively to stimuli presented in the midst of competing stimuli, highlights the importance of active suppression of those competing stimuli. It’s what I think of as the dark side of attention.”
The researchers hope that knowledge from the study could be used in future training programs for jobs that require visual searching.
“Individuals who explicitly ignore distracting information improve their visual search performance, a critical skill for professional searchers, like radiologists and airport baggage screeners,” said lead author Corbin A. Cunningham, a graduate student at the Krieger School of Arts and Sciences’ Attention and Perception Lab.

‘The Angry Cabbage’. A Vegetable Rese…
Rakuten Wallet Announces Preparation …
LuxVite Uses Nanoemulsion to Improve …
Why We Need to Sanctify Ourselves
Common ENT Problems And The Solutions…

Can You Find The "T" In This Image?