GHEE OR CLARIFIED BUTTER BETTER THAN OIL FOR HEART 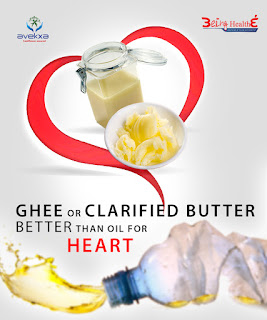 The process of creating traditional Clarified Butter is complete, once the water is evaporated and the fat (clarified butter) is separated from the milk solids.
However, the production of Ghee includes simmering the butter along with the milk solids so that they caramelize, which makes it nutty-tasting and aromatic.
An oil has been refined by using chemicals that are harmful to us. In short it means to 'purify'. But the meaning of purify has many definitions. It may mean the oil was treated with acid, or purified with an alkali, or bleached. It can also be neutralized, filtered or deodoriz¬ed. All of which require chemicals like Hexane, which may prove to be extremely detrimental to the health.
In the process of making and refining these types of oils, it leads to PUFAs (rancid polyunsaturated fatty acids) which are not good for our hearts when they are exposed to high temperatures. In the process of being extracted from the seed these oils oxidize and turn into trans fats. The smell is so rancid that a cleaning process has to take place using bleach to deodorize it.
Hydrogenated oil is made by forcing hydrogen gas into oil as high pressure.
Desi Ghee or clarified butter oil -which is often blamed for obesity and heart diseases - is not that bad after all for our health.
scientists have just discovered that Cow Ghee could protect us from cancer.
Cow ghee enhances the availability of enzymes responsible for detoxi¬fication of cancer-causing substances and decreases the availability of those responsible for activation of carcinogens.
Ghee poses no danger to cardiac health if the total fat intake is restricted to the prescribed limit, researchers said.
One must ensure that the intake of total fat (including ghee) should not exceed the prescribed limit of fat consumption. In the experiments done in lab, scientists studied the effects of cow ghee compared to soybean oil on female rats which were artificially given breast cancer causing chemicals.
They observed that the initiation and progress of mammary cancer decreased in rats which were fed on cow ghee. However, there was a greater proportion of tumours in animals fed on soybean oil. Researchers have deciphered the mechanism of ghee's protective properties.
'Feeding cow ghee decreased the expression of genes responsible for cell proliferation and raised regulated genes responsible for cell apoptosis', explained researchers.
One probable factor in cow ghee is the presence of conjugated linoleic acid (CLA), which is known to possess beneficial properties.
Cow ghee is a rich natural source of CLA, whereas, vegetable oils lack this particular fatty acid.
Most vegetable oils contain high amount of unsaturated fatty acid as well as linoleic acid - which is considered pro-carcinogenic as it forms free radicals known to damage DNA.
The ghee available in India is mostly made from buffalo milk.
And though the study was done on cow ghee, scientists said buffalo ghee is also expected to be similarly effective because both contain CLA. Moreover, ghee improves blood HDL level, which is good for heart.

TransferGo Ready to Enter the XRP Tec…
Alfredo Sauce
Best Gaming PC Build for 1080p: Under…
What are you telling me and why shoul…
Corsair Purchases Computer Builder Or…

GHEE OR CLARIFIED BUTTER BETTER THAN OIL FOR HEART